On October 18, Nintendo will finally fill a Wii Fit-shaped hole in its product line. The Ring Fit is a kind of spiritual accessor to the numerous fitness titles that helped make the Wii’s motion controls such a massive, demographic spanning success. But the large, round peripheral is perfectly at home on the Switch, taking a page from offerings like Labo, which find clever new ways to leverage existing hardware.

I took the forthcoming peripheral for a brief spin earlier this week, and like Labo was pleasantly surprised with what Nintendo was able to accomplish here, using the Switch’s Joy-Cons as a starting point. Here, each side serves a uniquely different purpose. One slots into the ring and the other into a band that straps on the player’s thigh. 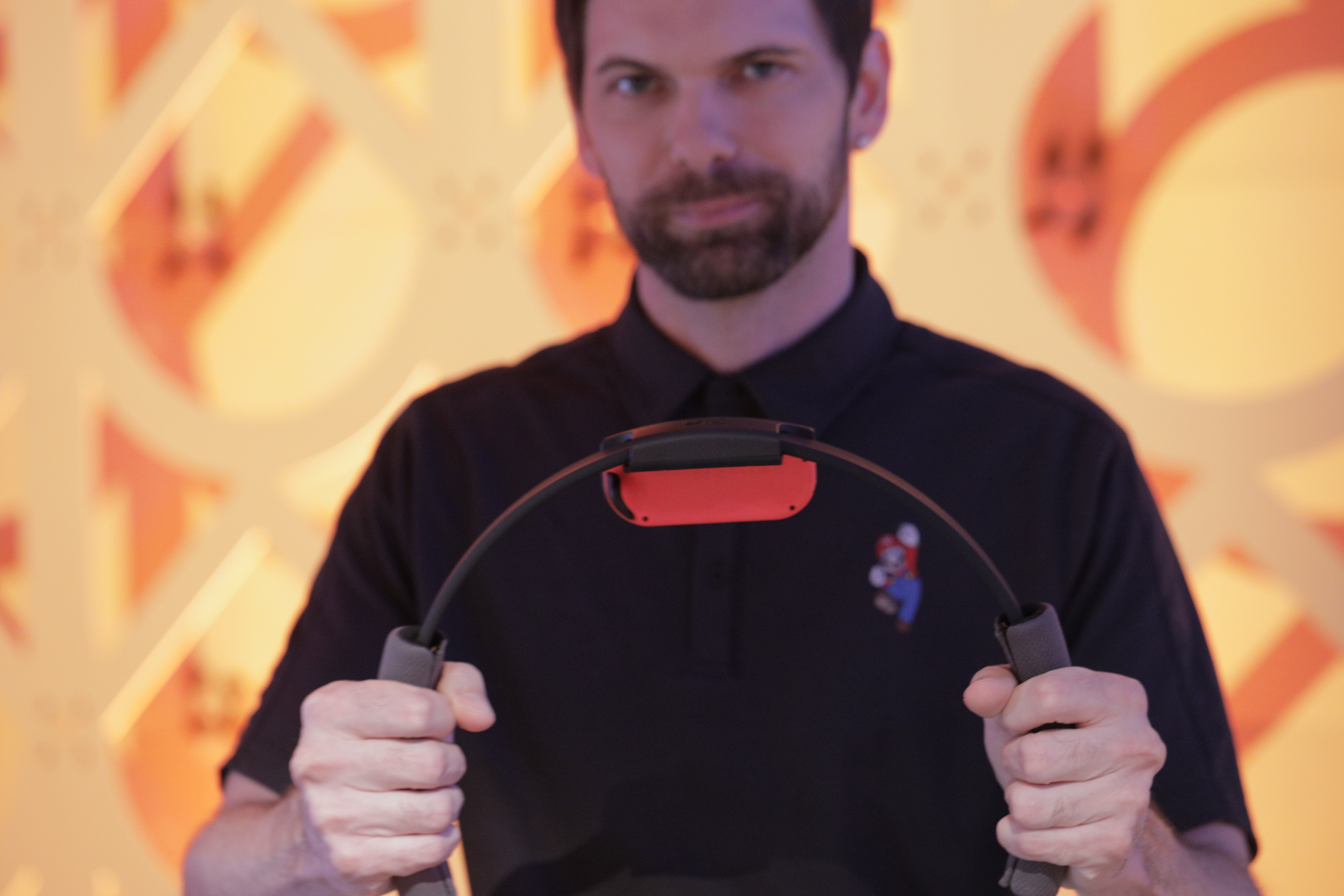 In the case of the former, the controller serves as the brains for the flexible steering wheel controller, measuring movements via built-in sensors, including the accelerometer. Using that set up, you can spin the ring to move selection in the starting menu and squeeze its sides to select. The second controller, meanwhile, serves as a sort of makeshift Fitbit, keeping track of your lower body movement — a pretty central part of the workout.

Adventure is the first title to use the hardware. It almost certainly won’t be the last, though Nintendo, per usual, won’t comment on any future plans. Rather than going the straight sports route, à la Wii Sports, Nintendo’s instead created what amounts to a Final Fantasy-style turn by turn adventure game that makes the player battle bad guys by breaking a sweat.

There are a ton of different games and workout experiences out of the box, but the basic adventure plays out as follows: You move your character by running in place, squeezing the ring to blow up boxes for coins and pulling it apart to suck in power-ups. Jumps are accomplished by pointing the ring downward and pressing in. You will break a sweat.

Your character’s anime-style hair is a big ball of fire, growing or diminishing based on how well you’re keeping up. Every so often along the track, a boss will appear. You’ll then engage in a turn by turn battle using a variety of different ring-based exercises. When it’s the monster’s turn, you’ll squeeze the ring against your torso to defend yourself.

Nintendo’s dreamed up an impressive variety of exercises that utilize the ring’s resistance. Playing an hour a day, it’s easy to actually lose some weight. The game also does a pretty good job encouraging you to mix things up. I’d certainly be interested in doing some extended testing — I like the idea of a fitness regiment one can accomplishment at home or in a hotel room with minimal equipment. 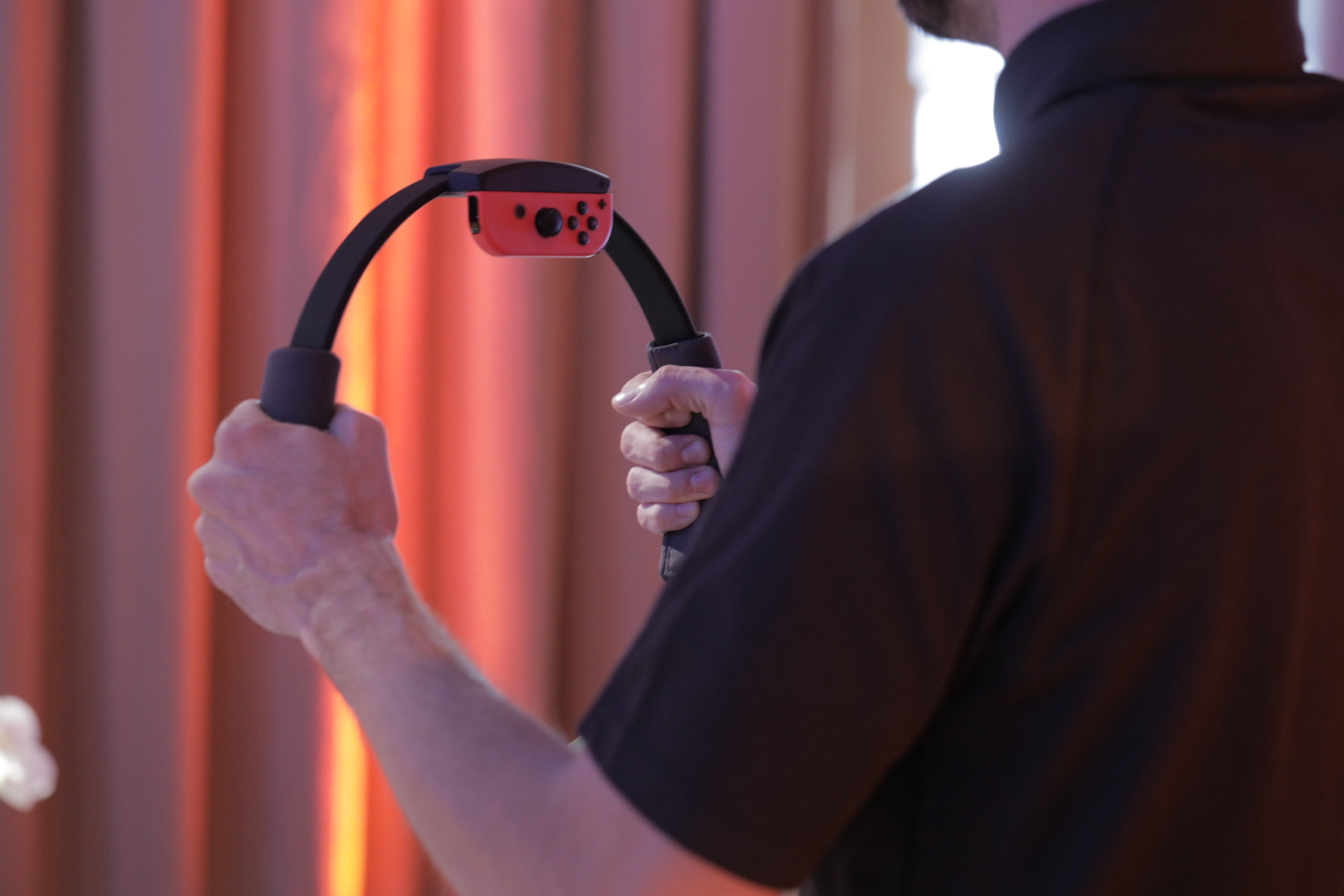 You can also detach the Joy-Cons and take the ring with you to get some reps in away from the system — say, on lunch break at work. The controllers will continue to record your progress and upload them when you get back.

That said, I’m pretty committed to the Switch Lite these days. The Ring Fit will work with the system, assuming you also have a pair of Joy-Cons. You can prop up the Lite and use that screen for the game, but you’ll really want a TV screen for the full effect here. It’s easy to imagine, however, Nintendo combining Labo VR with the exercise kit for a more immersive fitness effect.