There are two sides to starting a new business. On one side, entrepreneurs need creativity, imagination — a dream, essentially — to find, build, and market a new product to users and consumers. But on the other side, they have to deal with the regulatory state and all the minutia that comes with running any business in the 21st century.

That includes such delightful topics as choosing a particular model for incorporation, ensuring that a business has the right licenses to operate, and tracking all the legal changes happening in 50 state legislatures every year. It can be inordinately complicated (and expensive!) to ensure that your business is ready and legal.

That’s where ZenBusiness comes in. The Austin-based startup wants to empower entrepreneurs to build businesses large and small by dramatically simplifying the processes required to launch a business and then grow it.

When I last chatted with the company 18 months ago, they had just raised a $4.5 million seed round and had launched its platform. Today, it’s announcing that it has raised a new $15 million series A round led by return backer Greycroft, along with returning investors Lerer Hippeau and Revolution’s Rise of the Rest fund, alongside new investors Rosecliff Venture Partners, Interlock Partners and Recruit Strategic Partners.

The company launched with a product that was essentially an automated registered agent for new entrepreneurs. Under state incorporation laws, companies must designate a so-called “registered agent” to receive official notices from regulatory agencies, and so ZenBusiness chose this strategic point for entry into the market.

When I last chatted with CEO Russ Buhrdorf, he described rolling up this market as one of the key initial targets for the company:

ZenBusiness is the brainchild of Ross Buhrdorf, who joined vacation rental marketplace HomeAway five months after its inception as founding CTO, and stayed for a decade until its acquisition by Expedia in 2015 for $3.9 billion. Buhrdorf intended to take a year off, but “didn’t quite make it a year” he told me.

He explained to me that HomeAway in many ways followed a rollup playbook, “raising $400 million and acquired 26 companies.” Bringing that rollup lens while exploring new spaces, he ran into the corporate legal services market, which offers help to companies to keep them in compliance with the law. Buhrdorf liked what he saw. “It’s different in all 50 states, highly-regulated, which is great for technology, it is overpriced, and they underserve their customers.” He says the space is “completely ripe for disruption.”

Since that time, the company has expanded its product to help entrepreneurs get beyond merely incorporating to actually building out their business by recommending services like banking, lending, tax preparation, website building, and more. The hope is to provide a “worry-free” guarantee to entrepreneurs so that they can get those early critical logistics out of the way and back to actually operating and growing their business.

“Small businesses come through this funnel, they don’t necessarily know exactly what to do. So we curate that solution, and then we provide them with the basics for them to get up and running and to be successful,” Buhrdorf said.

He explained that the company has built out some tools itself such as a simple webpage creator, but in the long run, he hopes to partner with other providers who integrate into the ZenBusiness platform. For instance, ZenBusiness has partnered with Xero as the company’s main accounting provider, while also backstopping that offering with accountants working at ZenBusiness. The idea is that the automated tooling plus a little human touch can help most owners handle the day-to-day challenges of running a business. 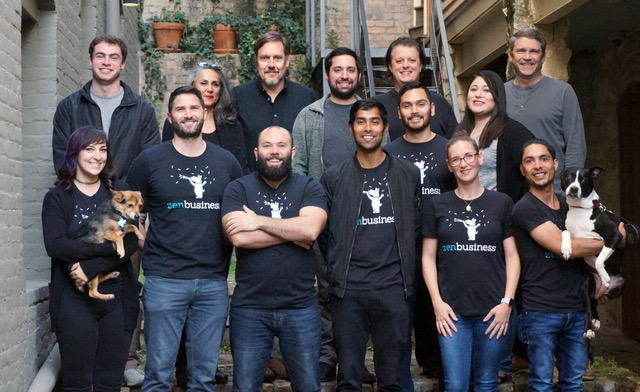 Buhrdorf is particularly focused on keeping the product very self-service and automated to allow it to focus on these smaller customers. “Many of the companies that you cover that are in the enterprise space, who provide solutions for medium-sized businesses, they have to charge, they have to have sales forces, it’s very competitive there,” Buhrdorf said. “What we’re after is the segment that’s underserved, it’s the long tail of the small business segment.”

ZenBusiness has expanded its services, and it is hoping to use the fresh infusion of capital to invest in building out community features that will allow small business owners to swap tips with each other and help one another grow their businesses (presumably with some guidance from ZenBusiness community managers and experts).

The company is now 40 employees predominantly in Austin with a small office in Peru. Since we last checked in, the company has transitioned to become a public benefit corporation, which Buhrdorf said was an attempt to better align the company’s charter with its mission orientation to help small business entrepreneurs.

Update: The funding total was changed from $10m to $15m. Sorry about that.