Fidel, the U.K.-headquartered startup that offers an API to let developers build functionality, such as rewards, on top of the major card payment networks, has raised $18 million in Series A funding.

Meanwhile, Hans Morris, former president of Visa and managing partner of Nyca Partners, and Yusuf Ozdalga, partner at QED Investors, will join the company’s board.

Fidel says the new funding will be used to expand the Fidel team and support the company’s growth, product development and international ambitions in North America, the Nordics and APAC.

Working in partnership with Mastercard, Visa and American Express, put simply, Fidel has developed a suite of APIs that make it easy to link a user’s payment card to an app. This means that developers are able to build card-linked applications “in a matter of minutes,” such as loyalty-based rewards and more innovative use-cases afforded by access to the real-time data that card payment networks can provide.

Not only does Fidel offer a single point of integration — thanks to its partnerships with all three card networks — but the company also removes the burden of regulatory compliance from its customers by securely tokenising card numbers. “All of this helps businesses get to market and scale faster,” says Fidel co-founder and CEO Subrata Dev.

“Card-linking is the optimal choice for any user journey that relies upon real-time payment information, location accuracy and a frictionless customer experience,” he says. This includes loyalty, digital receipts, PFM/expense management and “online-to-offline attribution.”

Loyalty is currently Fidel’s main use case. This typically sees a user sign up to a loyalty program, where they can earn points, rewards and cash back automatically when they pay using a registered card. It’s the card-linking aspect that Fidel makes possible, regardless of what type of card it is and who the user banks with. Of course, with any such loyalty app, cards are only linked when a user opts in. 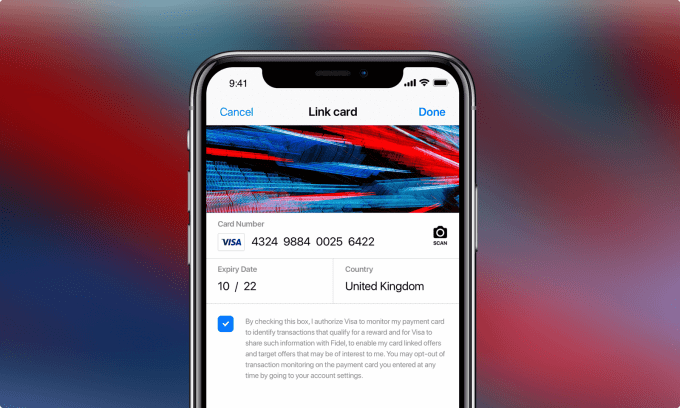 One example of Fidel-powered card-linking is the British Airways Executive Club app that lets members earn Avios points automatically when they shop with any linked credit or debit card at participating retailers.

Dev tells me the benefits of using Fidel instead of “open data sources” enabled through Open Banking/PSD2 is that card network data is real-time and granular. In contrast, bank account data, especially that offered by legacy banks as apposed to challengers, can be slow and quite limited.

“We are able to see specific information including — crucially — location, in real time, which is pivotal to many use cases,” he explains. “Open data sources typically provide much lower-quality data, even once scraped. Card-linking is also frictionless for the user, who registers their card once and shops as usual. Again, this is key for loyalty and retention use cases where open banking’s requirement for customers to re-authenticate every 90 days would cause far too much friction and dropout.”

With that said, as it stands, Dev says that Fidel rarely competes against Open Banking API solutions, as the choice of data source is generally dependent on the specific use case. “Many of our customers are using a combination of the two sources to gather a more holistic view and create better user experiences,” he adds. “So whilst there may be some level of overlaps, account-linking and card-linking are largely complementary.”