The Canoo designers have departed pretty radically from the traditional designs that other electric vehicle manufacturers have favored, going with something that looks more like a VW Microbus than the sport utility vehicle that Byton is aiming for, or Tesla and Fisker’s sports cars and sedans or Rivian’s electric trucks.

Remarkably, Canoo has completed the design and engineering of its first model in just 19 months and is preparing its vehicles for production through a contract manufacturer. The first cars are slated to appear on the road by 2021, according to the company’s current leader, Ulrich Kranz.

Kranz, who initially came on board as the company’s chief technology officer, took over the day-to-day operations of Canoo after Stefan Krause, Canoo’s co-founder and chief executive, stepped away from the company in August for personal reasons, as The Verge previously reported.

The two key features that Canoo was designing for were space and value, according to a statement from Kranz, and the first car from the company has plenty of both.

Canoo has beta cars on site at its Los Angeles headquarters, where prospective partners and customers can test out the vehicles, which were made by an undisclosed contract manufacturer based in Michigan. “We will crank out a couple of cars, which will be used to verify and confirm the simulations we have done so far,” says Kranz. 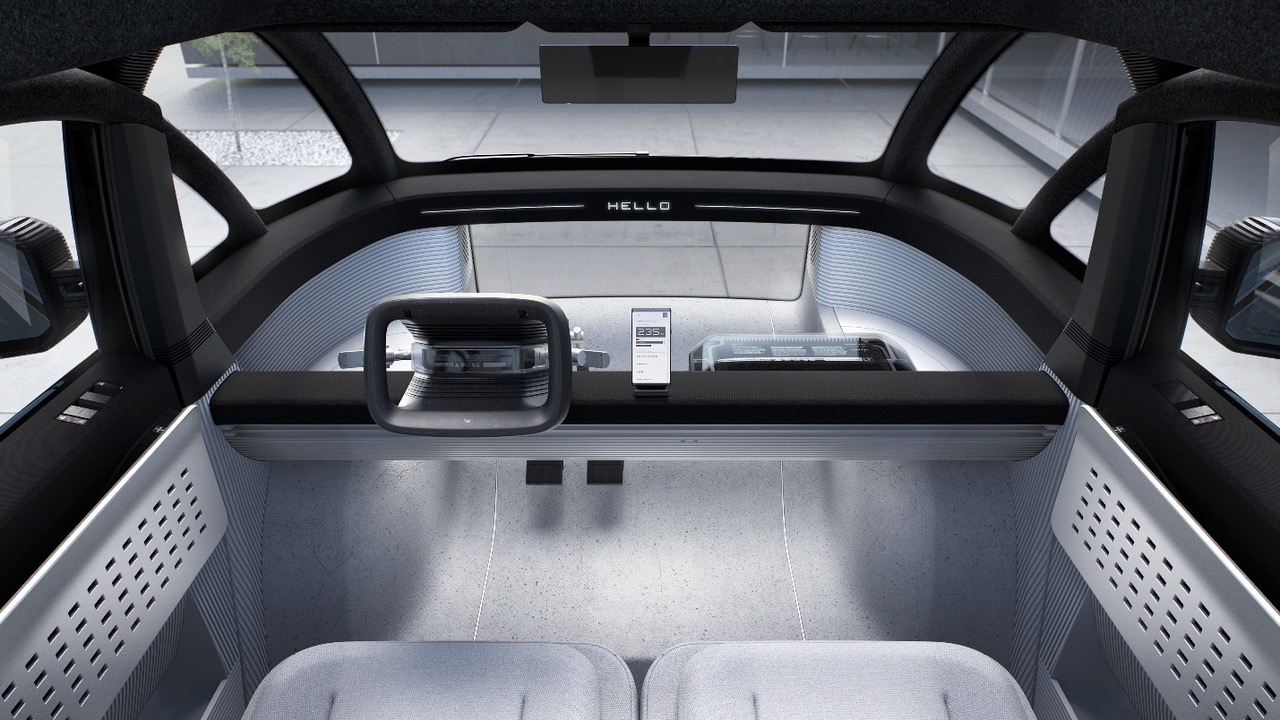 Canoo has spent the past year discussing the development of its prototype vehicle with the manufacturer so the company could provide advice on how to design and develop the car.

Canoo will launch its first vehicles in the Los Angeles market and expects to not only provide its “skateboard” platform for its own vehicles, but potentially work with other customers that would put their own cabin on top of the Canoo platform, Kranz says.

The company intends to go to market with an entirely new business model by providing customers with its cars for a monthly subscription fee. That service will likely include perks like automatic vehicle registration, maintenance, insurance management and charging through a single app on a customer’s phone. The idea, the company says, is to bring the convenience and affordability of a Netflix movie service to the auto industry.

The first vehicle will have enough room for seven people, with the interior space of a large sport utility vehicle in a car with the footprint of a small compact car, the company says. In the back, seats are positioned in a semicircular formation against the sides and rear of the vehicle, while the front cabin is arranged like a sofa, according to Kranz.

“Cars always have been designed to convey a certain image and emotion; however, we chose to completely rethink car design and focus on what future users will actually need. Thus, we came up with this loft-inspired vehicle,” says Richard Kim, who’s in charge of Design at Canoo. “When you subscribe, you think differently about a car — now the value is defined by the user benefit. We implemented the Bauhaus philosophy, which is centered around minimalism and functionality, and started with the reduction to the absolute minimal need. Next, we applied that approach to the seamless connectivity with the personal devices customers care most about — their phones.” 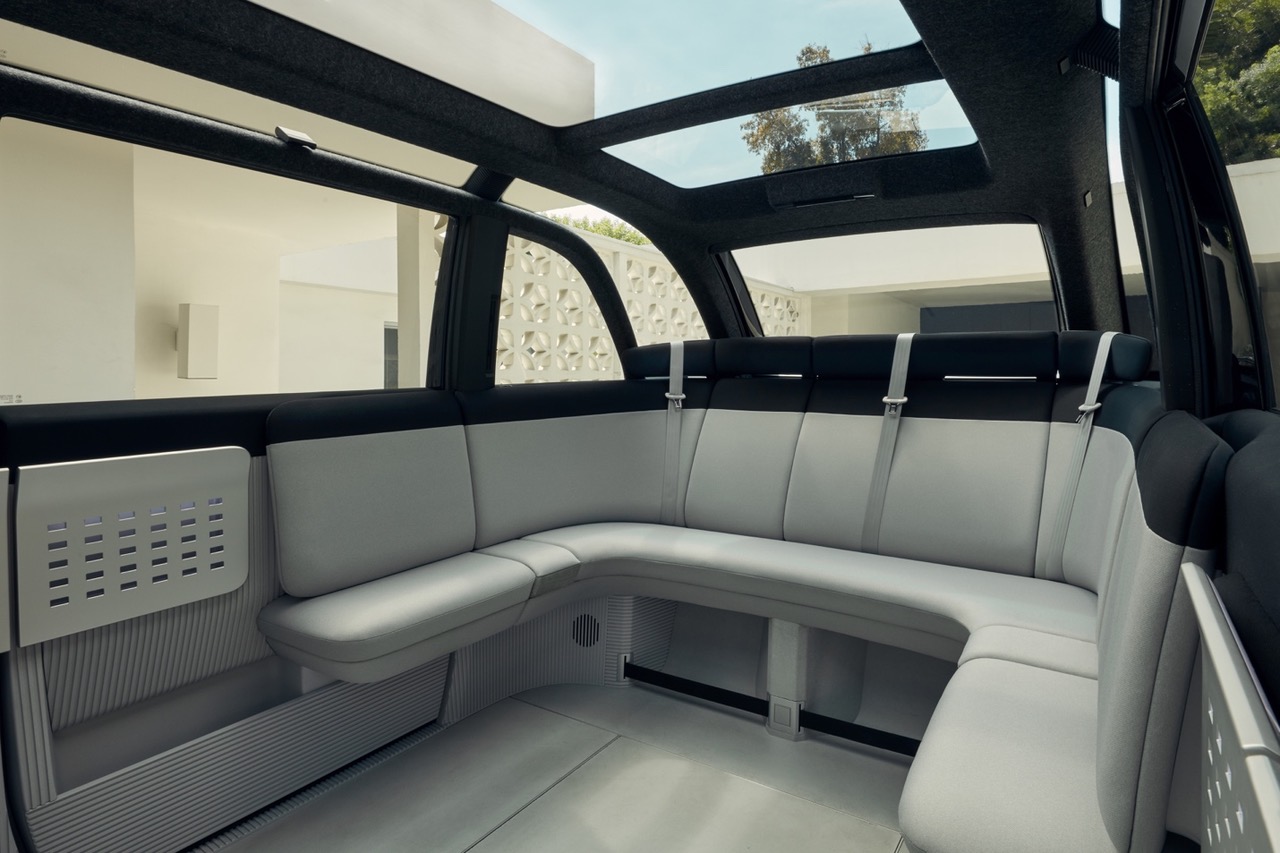 Entertainment systems are dependent on customers’ own devices and the canoo is compatible with both iOS and Android operating systems. Rather than having a central display, the company expects that drivers and passengers will want to use their own navigation and apps in the vehicle.

Kranz says it was also made with autonomy in mind, and while the current system is arrayed with seven cameras, five radars and 12 ultrasonic sensors to provide Level 2 autonomy, Kranz is especially proud of a new feature that has a video camera focused on the driver to monitor their actions and avoid unnecessary alerts when they’re operating a vehicle safely.

“We watch the face and the meaning of the driver with the camera,” Kranz says. “When the camera recognizes that the driver pays attention… like looking to the right side and checking blind spots, we don’t warn them with an alert… Because people sometimes turn off the warning systems.”

The heart of the Canoo system though, is its “skateboard” architecture, which houses the batteries and the electric drivetrain in a chassis underneath the vehicle’s cabin. All of the company’s vehicles will have the same base and different cabins to create all sorts of vehicles for different applications, the company says.

The first vehicle has a five-star safety rating and includes driver and passenger airbags throughout the canoo. The skateboard platform can also support dual, front or rear motor configurations the company said.

Finally, the company says it will have the first truly steer-by-wire vehicle on the market without a hardware connection between the steering wheel and the wheels.

Steering is conducted by electric signals only, with a fully redundant control system that the company says has some long-term benefits for future designs. Steer-by-wire offers both weight savings and gives Canoo flexibility on where to locate the steering wheel to accommodate different designs and driver positions.

As for range, the company’s first car has a range of 250 miles and can reach an 80% charge in less than 30 minutes. Its battery pack is fastened directly to the skateboard structure and saves more space because there’s no separate structure. The battery also is able to provide torsional rigidity and support for the vehicle because it’s resting directly on the chassis.

Kranz wouldn’t say how much Canoo will charge for its subscription service, but said that the company can reduce its cost because it can depreciate the vehicle’s value over a seven to 10-year time frame. “These savings we will be able to give back to the customer,” he said. And even with the low price, Kranz expects to make a mint with his new company. “We want to be the first EV company that makes a profit with an EV,” he says.

The rental model will help, as will the company’s conservative rollout plan. Kranz says that Canoo will start offering its subscription vehicles in one geography and scale slowly from there.

“We will roll out city-by-city,” he says. “Eight to 10 cities represent more than 70% of all the electric vehicle population [so] there is no need to provide our EV nationwide.”

The plan for 2021 is to launch in Los Angeles and have another eight cities account for the company’s U.S. market. That means four on the West Coast and four on the East Coast, according to Kranz.

“After the launch in the U.S. we are considering launching the vehicle in China… There are 18 cities that represent 75% of the EV population in China,” he said.

The controlled expansion plans and modest goals for geographical reach should be a big benefit for the company, according to Kranz.

“It gives us the big advantage that we can easily control our fleet and we are ramping up in a more conservative way and we are not bragging that we can churn out hundred thousand of cars,” he says. “We know how difficult it is to manufacture a good quality car at a high pace.”