Stationhead, the mobile app that turns its users into streaming radio DJs, got a big upgrade today. Where Stationhead DJs were previously limited to broadcasting live, they can now record their shows, making them available on-demand for anyone to listen later.

The idea behind Stationhead is to democratize and recapture the personality of traditional radio broadcasts — the kind of conversation and personal connection that’s missing from a playlist.

The app includes features like the ability to call guests to join the show, and integration with Spotify and Apple Music. For Stationhead, that means it doesn’t have to make its own licensing deals with the music labels; for listeners, it means that when a DJ plays a song, you’re hearing it stream from the music service of your choice.

That integration will continue with these new on-demand broadcasts — so they don’t really exist as a single, continuous recording, but rather as DJ recordings interspersed with cued-up songs from Apple or Spotify. (That’s presumably why these broadcasts won’t be available for offline listening.)

CEO Ryan Star (pictured above) has said that he co-founded Stationhead as a result of his own frustrations as an independent musician, particularly the difficulty and cost of getting a single played on the radio.

More recently, he told me that Stationhead is becoming a real alternative for independent musicians trying to get attention, with more than 200,000 shows created since November of last year. 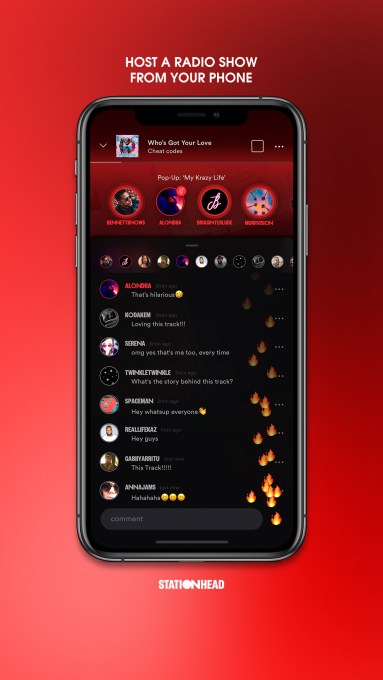 The company isn’t sharing overall listener numbers, but it pointed to success stories like Burrell Kobe, who said he drove 23,000 streams on Stationhead. (SensorTower estimates that the iOS app has been installed by 110,000 users globally.)

And Star described the Stationhead approach as combining “creative freedom and real human connection. While the most popular Stationhead broadcasts can get more than 1,000 live listeners, he suggested that the connection can happen even when the audience is much smaller: He recalled stumbling on a broadcast where he was literally the only person listening, but the host was “spilling her guts — this was her therapy.”

And by making these broadcasts available on-demand, he said Stationhead is “tapping into something proven to be the most intimate form of communication.”

He added, “For the first time, you’re actually able to create binge-able audio content around these streams.”

Stationhead allows anyone to become a streaming radio DJ, with live listener calls