It’s been another hard week at MIT. Our campus has been divided by revelations of inappropriate fundraising, coverups, and the harboring of far too many tech geniuses who seemingly put their own interests and careers over the safety of women, among other marginalized groups.

As a chaplain to students and faculty at the Institute, but also as an opinion writer on the ethics of technology who is supposed to be on sabbatical from the chaplaincy to focus on the writing, I’ve been torn all week as to what to say. If you don’t know what a chaplain is, and you would hardly be alone in any ignorance there, it is a position that emphasizes confidentiality and trust. I know there are a lot of people on MIT’s campus who are scared, sad, and hurting for various reasons, and I wouldn’t want any of them to feel less able to speak with someone like me because I’ve chosen to speak out publicly.

At other times, in the midst of other campus controversies, I’ve personally opted to remain relatively silent, leaning into the part of my job that is, officially, one of quiet service to a university as a whole. I’ve been critical of a lot of big institutions over the years, including much of religion, but also a lot of organized atheism.

But as a chaplain at big educational institutions, I’ve rarely felt comfortable being too critical of those institutions, the universities, which at least in my judgement have more power and influence (not to mention more money, though they don’t really pay it to me) than even the oldest and grandest of churches and temples.

Maybe I was wrong in some of those cases; at other times, maybe I was able to do some good by keeping quiet. I reflect on this out loud not because anyone reading it should particularly care about my situation or my inner conflict. You most likely shouldn’t.

I share my own ambivalence, however, because I know countless executives, administrators, and other kinds of leaders have been through similar thought processes. It’s not my place to speak. If I do speak, maybe they’ll fire me, and then I can’t do anyone any good. Even if they don’t fire me, I’m supposed to be ‘objective;’ if I enter the fray, I’ll lose the trust and confidence of half the community.

But then I think about the students and faculty who need support the most. What they need are educators, peers, and administrators who are willing to join them in taking some risk to do what is right.

I was proud, last week, to share the first half of an exclusive interview with an MIT student named Arwa Mboya who brilliantly and bravely spoke out, helping bring about the resignation of one of the world’s most influential tech ethicists, former MIT Media Lab Director Joi Ito. As I said on Twitter, for my money Mboya has been the biggest of the many heroes in this Media Lab scandal.

The MIT Media Lab controversy and getting back to ‘radical courage’, with Media Lab student Arwa Mboya

For her efforts, Mboya was awarded a “Bold Prize,” and celebrating students for their bravery seems unequivocally good. Leaving them alone with their courage, however, by remaining silent in the name of “objectivity,” would be a moral failing.

I’m not sure it’s my place to use this space to call on MIT President Rafael Reif to resign for his own role in allowing Jeffrey Epstein’s donations to the Institute — a role Reif acknowledged this week at an MIT faculty meeting in which he said, “I understand that I have let you down and damaged your trust in me, and that our actions have injured both the Institute’s reputation and the fabric of our community.”

Maybe there are ways forward where MIT is able to heal with Reif still at the helm, though personally I have a hard time envisioning them. But at the very least, we must support students.

And by that I mean, people like me need to publicly and visibly support tech students who feel an ethical obligation to call for the resignation of their own university’s leader over his publicly acknowledged role in not only tolerating but greenwashing human trafficking and serial pedophilia. Just like the drafters and 60+ signers of this powerful letter from women on MIT’s faculty have done.

Will Reif resign? Will more information come out that makes his resignation seem even more inevitable? Or will the “independent review” he has put in place exonerate him in some way? Time will tell.

Meanwhile, as MIT sought to distance itself from Jeffrey Epstein and the broader social questions his case raises, this hard week did bring at least one piece of good news: the resignation of Richard Stallman. A MacArthur “Genius” Fellow and major figure in the history of computing, Stallman has long been a stain on the reputation of institutions with which he has affiliated, for troublingly sexist comments and stances.

Richard Stallman of MIT, an Epstein defender, believes that pedophilia is fine if the child is willing. Hold on to that tidbit for a second. https://t.co/RiGvhJW9hR

The Overton Window on someone like Stallman has now shifted, however, once again thanks to outspoken students, most often young women of color. Like Selam Gano, a recent MIT graduate in robotics engineering, who “arguably set Stallman’s departure in motion,” by speaking out last week on Medium. Gano’s post, entitled “Remove Richard Stallman and Everyone Else Horrible in Tech,” followed an email Stallman had sent to a Listserv affiliated with MIT’s renowned CSAIL research laboratory.

I forgot to share. Here’s the latest. ⁦@selamjie⁩ a grateful MIT thanks you for your bravery. https://t.co/SLiBFuGVcN

“There is no single person that is so deserving of praise their comments deprecating others should be allowed to slide,” Gano wrote. “Particularly when those comments are excuses about rape, assault, and child sex trafficking.

Gano’s drawn-out emphasis on the nature of the crime in question is entirely appropriate. After all, “human trafficking is the single largest illegal industry in the world,” as the framers of this additional recent petition for resignations of prominent MIT officials made clear. Human trafficking, they wrote, far eclipses even the international drug trade, and continues to inflict incomprehensible suffering on women, children, and families around the world.

In calling for leaders to leave, Gano, like Mboya before her, is not harming MIT or damaging its reputation. To the contrary. Both women have expressed, publicly and privately, a great and ongoing love for the school and what it represents.

In fact, it’s not coincidental that both of these whistleblowers have even described MIT as the best place in the world for them educationally, the site of some of their happiest memories and proudest moments. It’s that kind of true pride that leads morally upstanding people to say, “enough.” Because they want and need to continue to be proud. And because they understand that true pride is the opposite of a coverup. It is the opposite of clinging to power.

As Selam Gano wrote in her Medium post, “I know, now, that if prominent technology institutions won’t start firing their problematic men left right and center, we will do nothing. Ever.” Gano, Mboya, and other students and educators I admire are unwilling to allow an extraordinary institution like MIT to do nothing, or to do so little of consequence that it would essentially be nothing.

These people are, to the extent that a large research university is like a nation-state, true patriots. It might be scary to join them and walk alongside them publicly. Taking a stand might threaten our privilege and expose us to risk. That’s what being brave is all about.

Your move, President Reif and MIT.

“Okay, this girl was asked to change her religion at gunpoint and she didn’t do it,” MIT Media Lab student Arwa Mboya told me at the end of Part One of my interview with her, about a young woman she’d read about in a book called Beneath The Tamarind Tree. The book, by former CNN anchor Isha Sesay, is a skillful account of the 276 girls abducted from Chibok in Nigeria, which launched the “Bring Back Our Girls” campaign.

Mboya’s outspokenness in the face of the Jeffrey (no fucking relation, thank you!) Epstein scandal, inspired in part by her reading of Sesay, was among the bravest demonstrations I’ve seen by a student in 15 years as a university chaplain.

Previously, Mboya and I discussed her decision process for taking a leap which earned her a “Bold Prize” of, to this date, over $13,000 of crowd-funded money. But even more importantly, we discussed the life experiences which inspired Mboya’s courage in the first place — namely her love and radical hopefulness for the youth of her native Africa, and her passion to inspire those young people with the best tech has to offer. 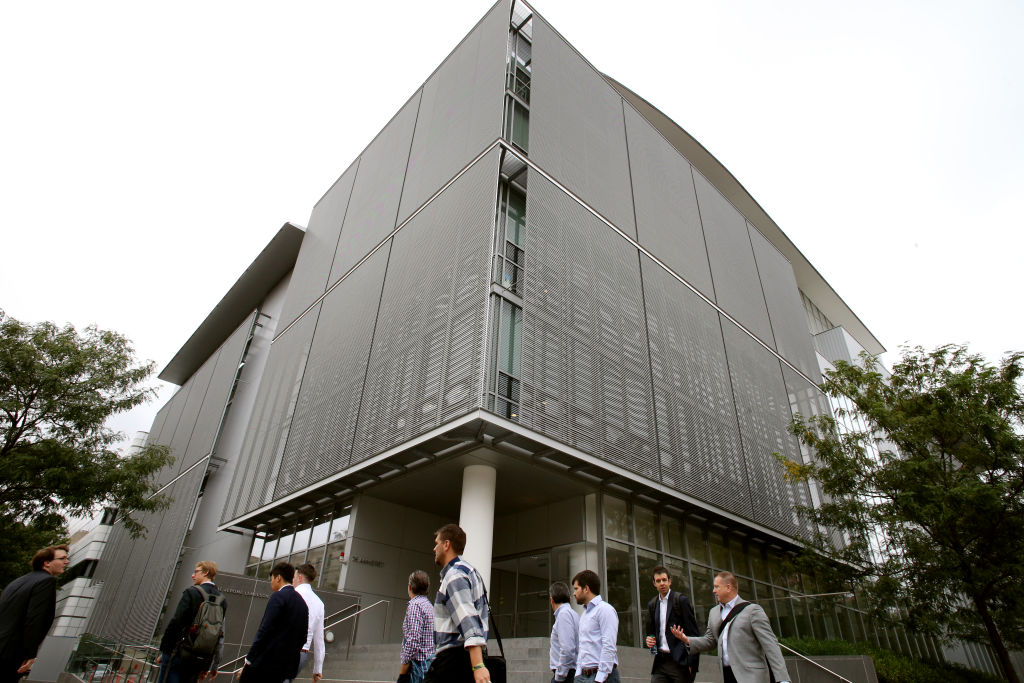 In this second and final portion of my conversation with Mboya, we pick up where Part One left off, discussing human trafficking in Africa and in the United States, and how the two phenomena are more closely related than many might imagine. We then get into reading (or not) the comments on her now-famous op-ed calling on Joi Ito to resign; her reaction to receiving the crowd-funded “Bold Prize;” her feelings toward Joi Ito today; and how radical imagination can breakthrough systematic oppression, in Africa and beyond.

“She believed that much,” Arwa said to me about the young woman from Chibok, “that even at gunpoint, even with a risk of rape, with a risk of death, with the risk of all the other nasty things, she stood up for what she believed in.”

It’s not hard to see how that kind of perspective and wisdom might have enabled Mboya to do something exceptional.

Arwa Mboya: The activist who started the Bring Back Our Girls Campaign hounded the government down – and the Nigerian government is scary. I was like, “Okay, these people can do that. I have power to just speak out. Am I really what I think I am? Am I as strong, as brave as I [think I] am?”