Sonos has released their first-ever portable speaker with a built-in battery: The $399 Sonos Move, which starts shipping to customers on September 24. After spending a few days with the Move, I can confidently say that it offers everything that’s great about the Sonos wireless audio system, but with all the added advantages of a speaker you can freely move around the house — or take with you on the road.

The Sonos Move is not a small speaker — it’s about 6.61 lbs, and nearly 10 inches tall by 6.3 inches wide and just under 5 inches deep. If you were expecting it to be around the size of the Sonos One, you’re in for a shock, because it’s quite a bit bigger, as you can see from the photo below. 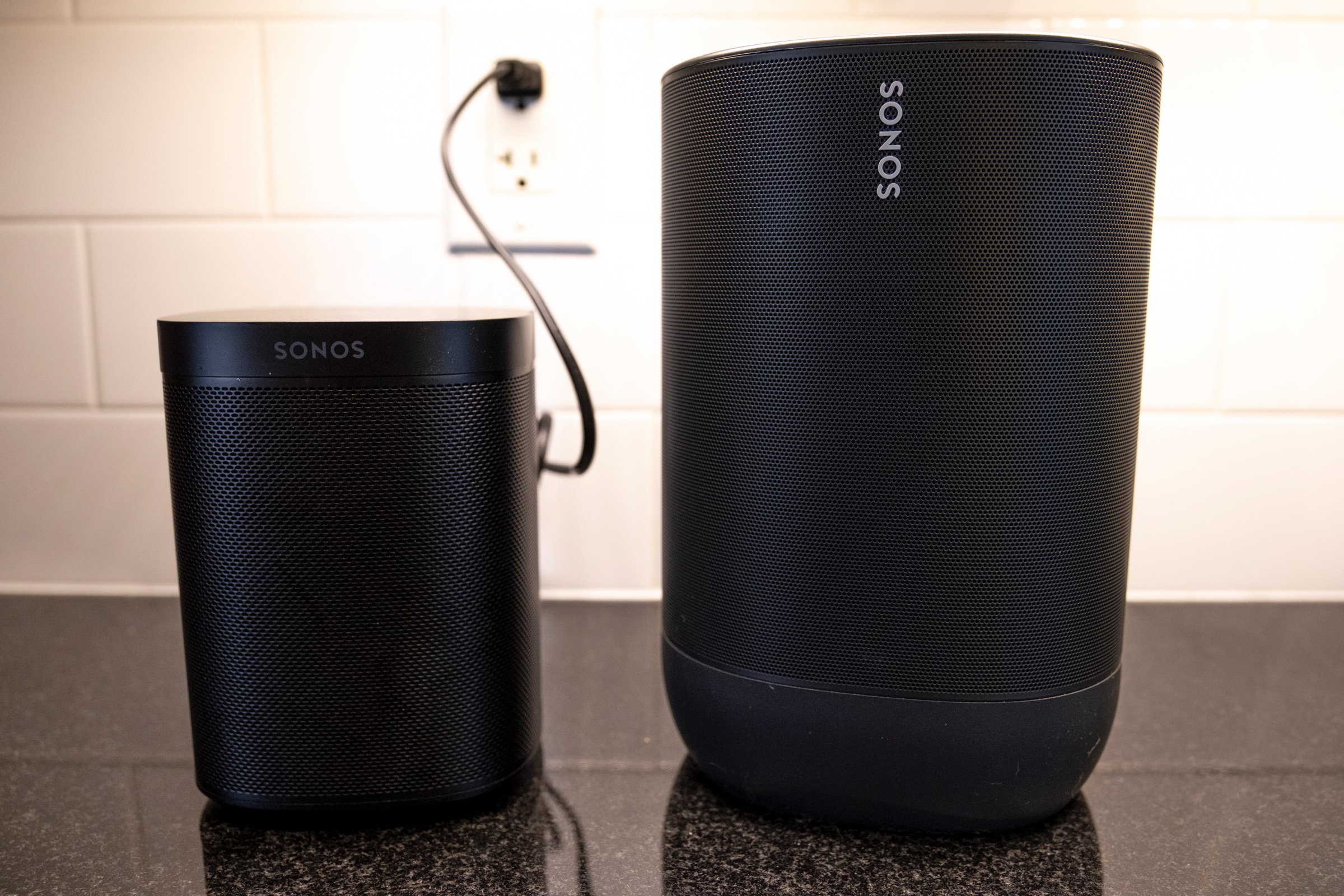 Nor is the Sonos Move just a Sonos One stacked on a big battery and wrapped in a new exterior shell — the company tells me it’s a brand new design in terms of the internals, too. The company set about designing a different speaker because the Move will suit different uses versus the One, as it’s designed to be used in all environments, including outside in open air.

The result is a speaker that can get a bit boomier than the Sonos One, with deeper lows that seem to anticipate it having to compete with a lot more ambient noise. The sound profile is also helped by a downward-firing tweeter, which is used to create a wide sound stage for the Move, which, in practice, means it does a very good job of evenly blasting music at a spread out group at, say, a picnic or a camp fire.

Indoors and out, the Sonos Move provides the kind of quality audio you can expect from any Sonos device, and it seems nearly equally impressive on both Wi-Fi and Bluetooth modes in my testing, though Wi-Fi does seem to have the edge in terms of quality. You also can pair two of the Move for true stereo sound, though because I only had one review device on hand I wasn’t able to test this.

The Move’s highlight feature is its ability to move around and operate on battery power, and that’s why it offers two different connection modes. You can use it as a standard Sonos Wi-Fi speaker, connecting it to your Sonos account and having it show up in your Sonos app the same as any other speakers made by the company, which you can group and control as usual. 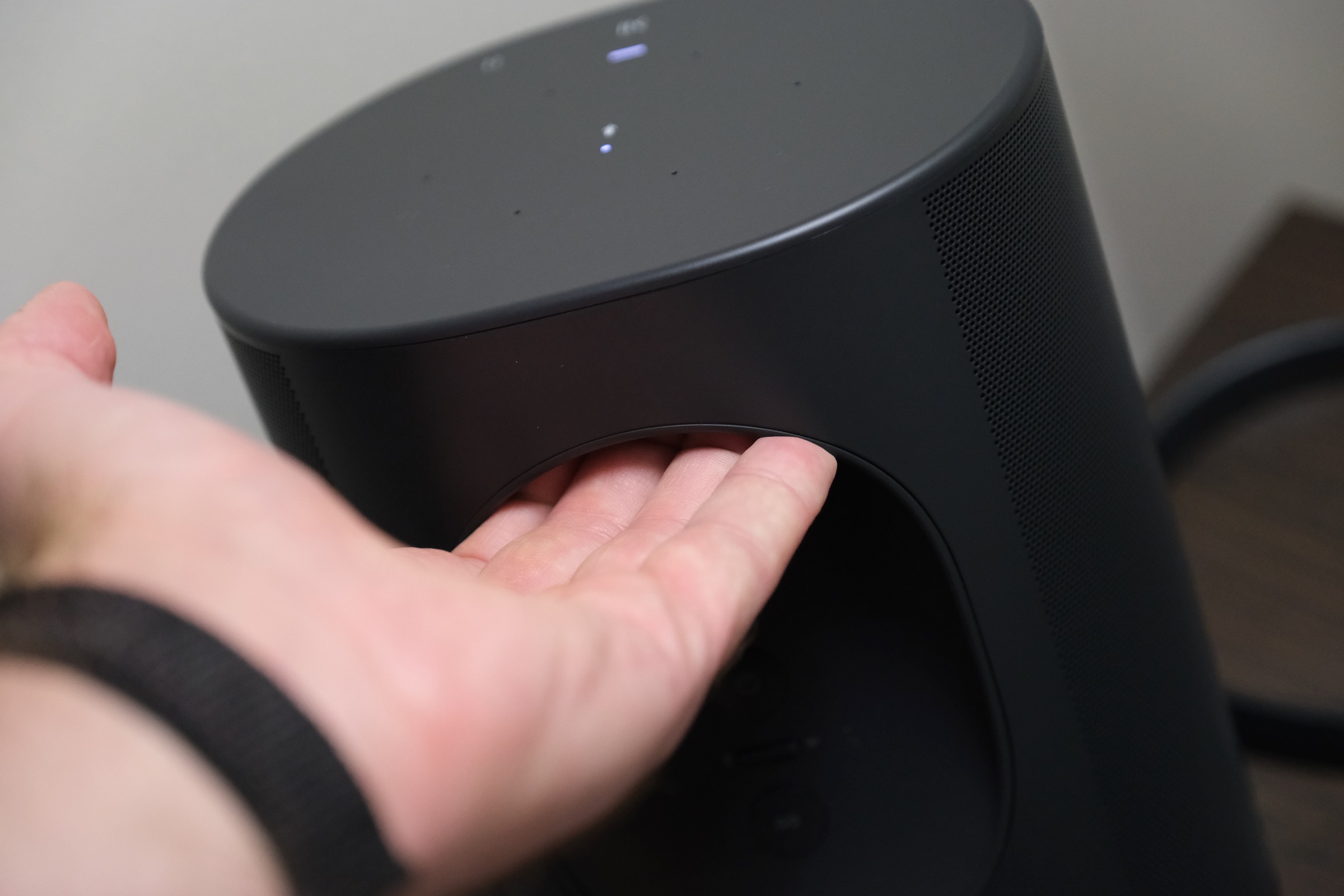 In Bluetooth mode, you pair it just like you would any Bluetooth speaker, directly to the device from which you want to play music. A button on the back switches modes, and the first time you switch to Bluetooth the Move will automatically enter pairing mode, making it super easy to connect your phone. I was set up on Bluetooth within just a couple of minutes.

A convenient built-in handle is located on the back of the Move just above the pair, power and Sonos system connect buttons. It’s one of the highlights of the design, and because it’s part of the exterior shell, it should be rock solid in terms of durability. Overall, the device feels like it’s incredibly sturdily built, also, and Sonos advertises it as a weather and shock-resistant speaker that isn’t afraid to take a tumble or handle a little light rain.

In Bluetooth mode, you won’t have access to either Alexa or Google Assistant, even if you’ve set those up on the Move to work with your home system. Nor will it work in a stereo pair with another Sonos if you’d done that, or show up in the Sonos app for multi-room control. But at home, you can just use the Wi-Fi mode as you move it around the house or to the backyard and still take advantage of all those. While you’re out and about, you’re much more likely to just want a basic wireless speaker anyway, so not having access to these features on Bluetooth really doesn’t have any impact on usability.

During my testing, wireless connectivity was solid on both Wi-Fi and Bluetooth modes, with no dropouts or stutters. Even leaving aside the Sonos aspects of the speaker, it’s also likely the best-sounding Bluetooth weather-resistant speaker I’ve ever tried, at this or any other price range. 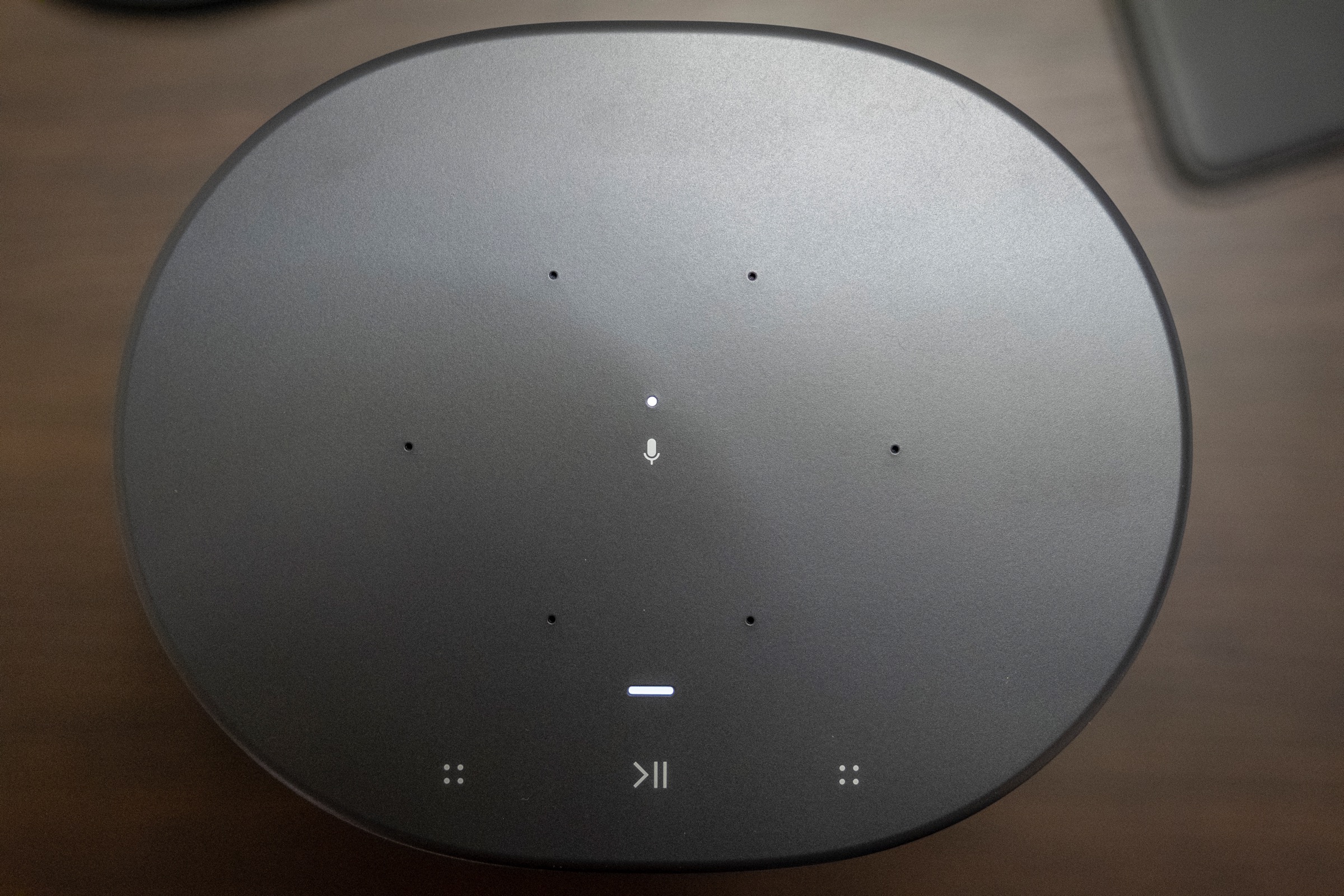 The Sonos Move also features built-in support for Amazon Alexa and Google Assistant, both the virtual assistants that are also available on the Sonos Beam and the Sonos One. Built-in far field mics do a great job of picking up voice commands, and if you’ve used either of these assistants before on other Sonos hardware, you’ll get the same great experience here — provided you’re on Wi-Fi and not Bluetooth, as mentioned above.

Sonos has added a new trick to the Sonos Move using the mics it includes for use with these voice assistants, too: Auto Trueplay. This is a version of its Trueplay sound tuning feature, which it includes in other Sonos speakers. Normally, however, you have to do the process manually using your smartphone’s mic to evaluate the sound. The Sonos Move uses its own mics to adjust automatically — and it does it constantly, changing the sound profile to match your space as you move it room to room, or even outside.

In actual use, the effect is subtle, which it should be, as the sound is adapting over time. But I found that it undeniably made a difference, and that listening to the same song initially upon switching the Move’s location, and then after a period of time (I tried an hour or so), produced obvious benefits in terms of the sound of the second listening. 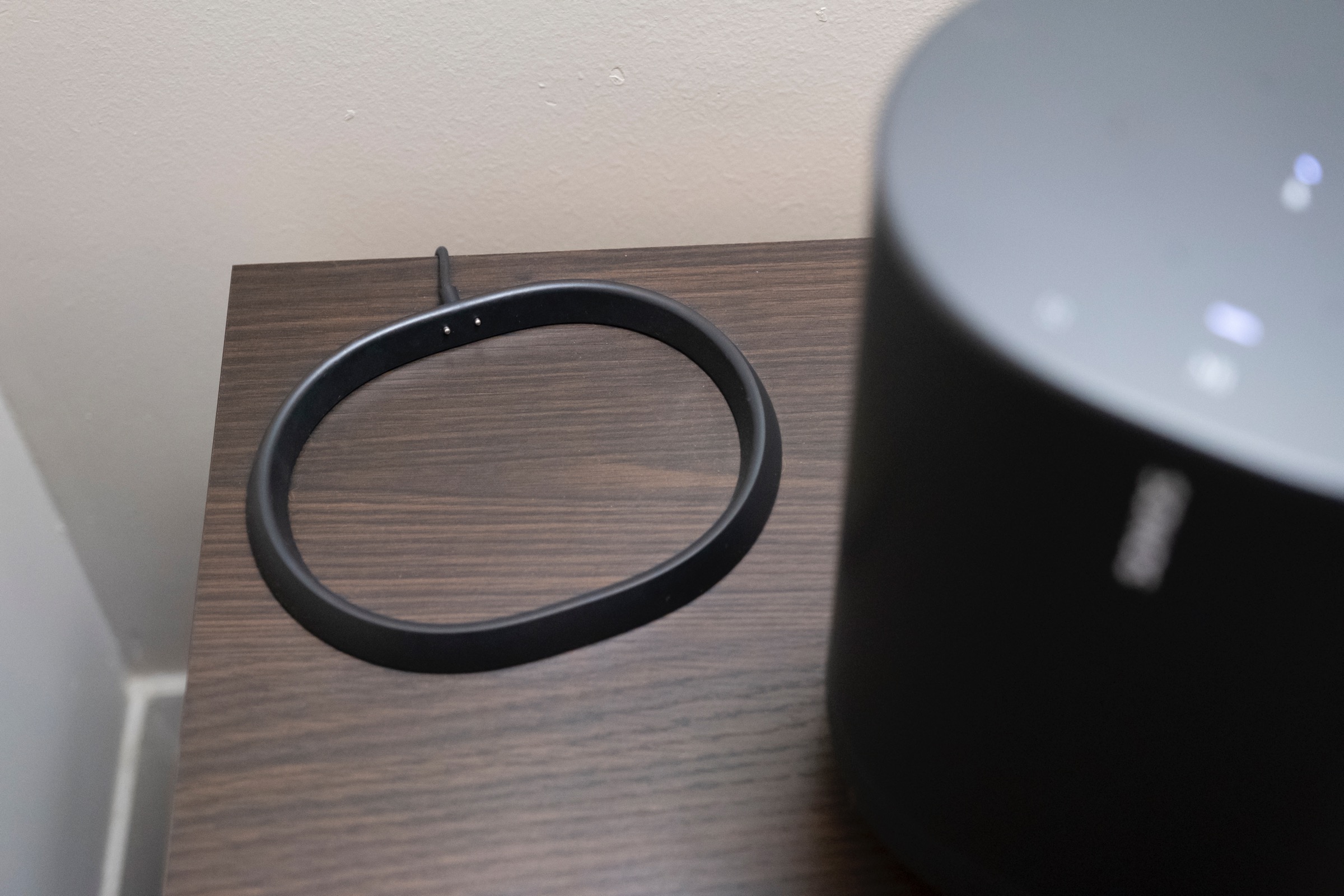 Sonos has done a great job with all things related to their first battery-powered speaker. The built-in power source is rated for up to 10 hours of continuous playback according to the company, and in my testing, I actually got north of that, but of course your mileage will vary depending on what kind of connection you’re using and at what volume you’re playing music.

Charging is handled two ways, which is a very welcome bit of adaptability that suits the Move’s dual nature as both a Sonos network speaker and a portable audio device. There’s the charging base that comes in the box, which you can see above. This has metal contacts that provide power via connection points on the back of the Move, while providing an attractive and stable base for use in your Move’s more permanent “home” location.

Then there’s a standard USB-C port located on the base above the charging contacts, which is perfect for use when you’re taking the Move on the road, or if you’re just using it outside but near an external outlet and don’t particularly feel like moving the charging base. It’s another example of how the Move can do double duty with smart design elements that don’t require any compromises on the user’s part. 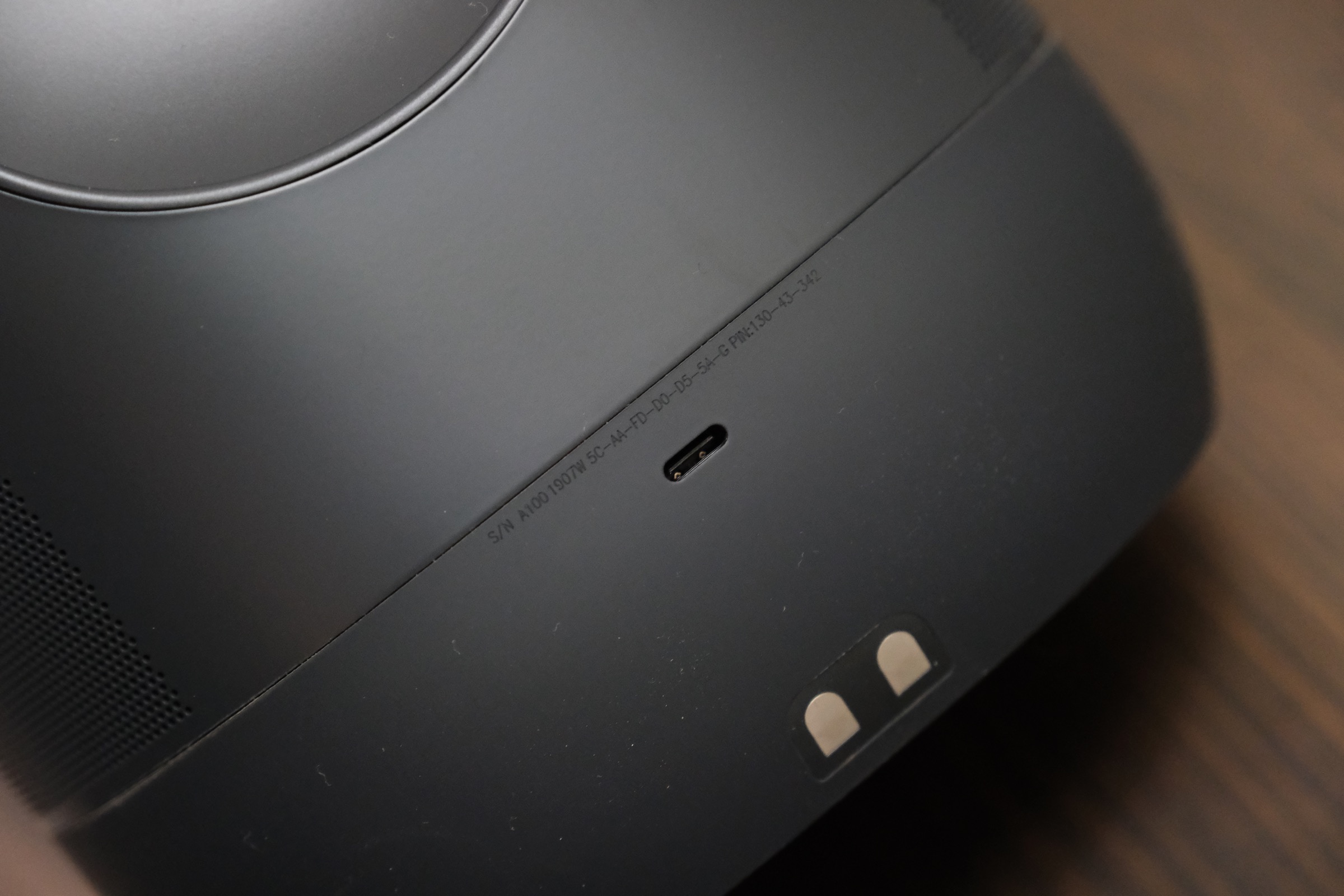 Where it fits in the Sonos line

The Sonos Move is unlike any other speaker in the Sonos lineup. It plays nice with the rest, but only to a point: The Move can’t act as rear satellite speakers or pair with the Sonos Sub, for instance, something which the rest of the lineup can all manage. Sonos says this is because the speaker was designed to move around the house, so it doesn’t make sense for it to be tied to a more permanent installation, as in a home theater or Sub-supplemented arrangement.

That said, it’s a solid choice as both an addition to an existing Sonos network or as your first Sonos device. In the first case, it’s the best way to add a patio-friendly Sonos-compatible speaker to your setup without having to drill into your walls or call home installers; in the second, it’s a great all-around wireless speaker if all you really need is one, as it can follow you around the house, adapt its sound and even pack in the car for road trips or a day at the beach. 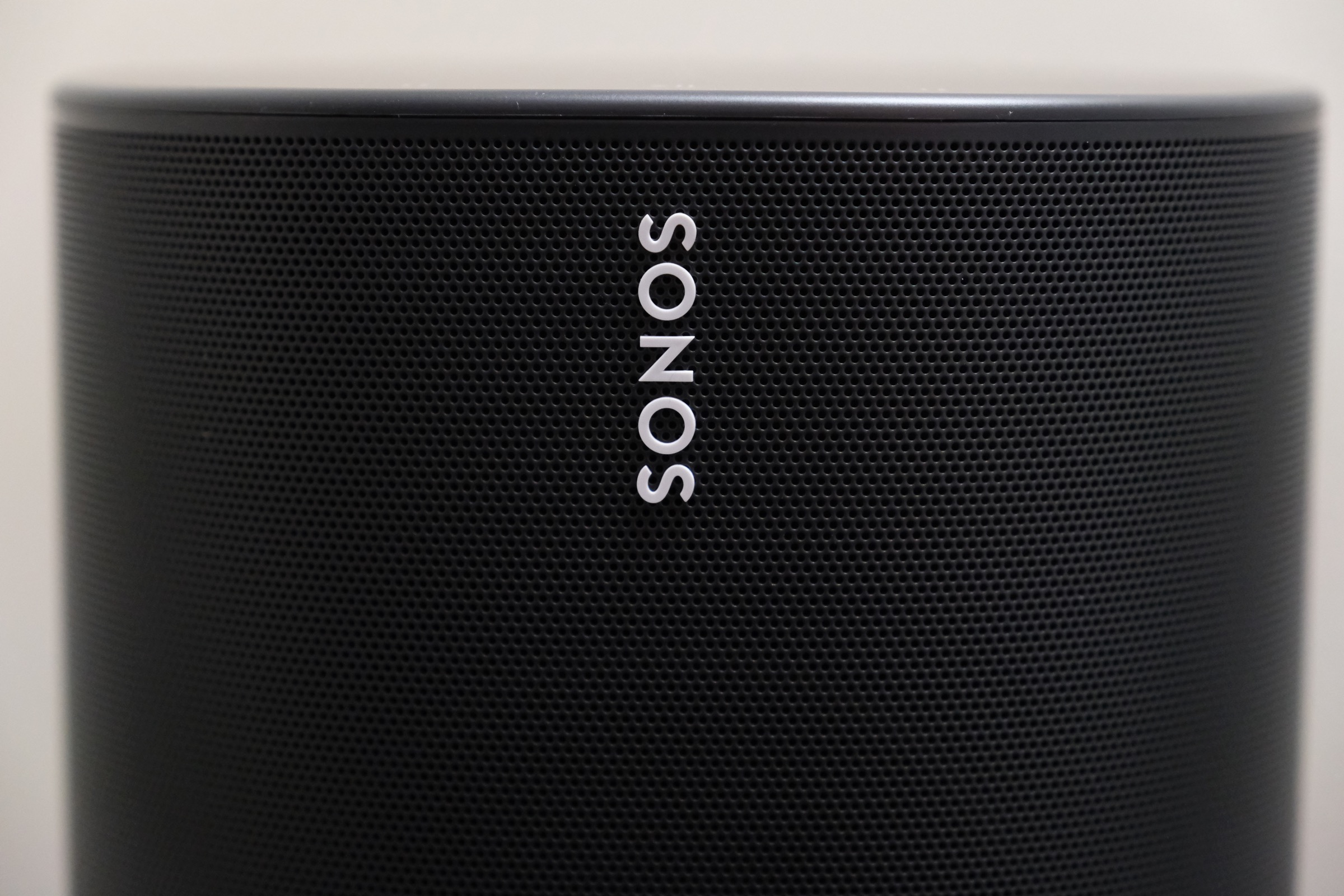 At $399, the Sonos Move is definitely expensive for either a Bluetooth speaker or a wireless home smart speaker. But when you consider that it’s both, and that it delivers all-day battery life on a single charge, intelligent adaptive sound to ensure it sounds best wherever you’re using it and the ability to stereo pair and work with other Sonos devices if you want to expand your setup later, it starts to seem a lot more economical — especially when sized up against equally priced speakers that lack half those features, like Apple’s HomePod.