Even before the 2016 election, political polarization was increasing, with Americans so entrenched in the news sources they rely on that the Pew Research Center said “liberals and conservatives inhabit different worlds.” Now SmartNews, the news aggregation app that recently hit unicorn funding status, wants to give users a way to step out of their bubbles with a feature called News From All Sides.

News From All Sides is an option located under the politics tab in SmartNews’ app. A slider at the bottom allows users to see articles about a specific news event sorted into five groups, ranging from most liberal to most conservative. Now available for new users in the United States, the feature will gradually roll out as the company fine-tunes it. 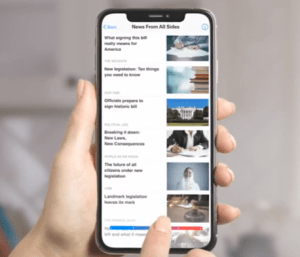 News From All Sides was created for readers who want to see other points of view, but might be overwhelmed by an online search, says Jeannie Yang, SmartNews’ senior vice president of product. It also aims to provide more transparency about news algorithms, which have been blamed for exacerbating political polarization.

Before developing the feature, the SmartNews team conducted research and focus groups in places including Minneapolis and cities in North Carolina to understand how people across the country consume political news online.

“We found that across the board, the last [presidential] election was not just a wake-up call about what news reporting is, but users also expressed that they are much, much more aware of algorithms running underneath what they see. They might not know how it works, but they know there is something else going on,” Yang says.

The political leanings of publications that appear in News From All Sides were categorized by SmartNews’ content team, which includes journalists who previously worked at The Wall Street Journal, Bloomberg, Fox News and other major news outlets. An AI-based algorithm decides which headlines appear in each category. As the feature goes through new iterations, Yang says SmartNews will make changes based on reader feedback. For example, future versions might look at the positions taken in specific articles and include more than five categories on the slider.

News From All Sides is an eye-opener along the lines of “Blue Feed, Red Feed,” an interactive feature (now archived) by The Wall Street Journal that demonstrated how much someone’s political leanings can influence what Facebook’s algorithms display on their News Feed.

Of course, there are many people who are content to be ensconced in their own news bubbles and may not be interested in News From All Sides, even with the upcoming presidential election. Features like it won’t fix political polarization, but for people who are curious about different points of view, even ones they strongly disagree with, News From All Sides gives them a simple way to explore more coverage.

“We definitely discussed that,” says Yang. “The feature is not initially targeted to everyone. It targets people who are more political news junkies, who are checking their phones for news multiple times a day and will actively seek out other sources, so they might go on Google News and go down a rabbit hole.”

“As more readers consider how they are going to vote, it will also help them with perspectives,” Yang adds. “It’s not something that will appeal to everyone broadly, but we hope that we will adjust a pain point for this core group and then iterate it to something more universal.”

SmartNews was founded in Japan, but the slider is currently only on its app for the U.S. because political polarization is a major issue there. Yang says the feature is one part of SmartNews’ goal to improve discovery in all news topics.

“Our mission is to break people out of filter bubbles and personalize discovery with the idea that recommendation algorithms can expand interests, instead of narrowing your interests,” she says. “We’re thinking of how to create more transparency and also expose readers to something they might not usually see, but present it in a fun way, like a serendipitous discovery.”