With a new feature called Yelp Connect, Yelp is allowing users to go beyond customer reviews and see “what the restaurants have to say for themselves.”

That’s according to Devon Wright, Yelp’s general manager of restaurant marketplaces. He explained that with Yelp Connect, restaurants will be able to post updates about things like recent additions to the menu, happy hour specials and upcoming events. These updates are then shown on the Yelp homepage (which is already becoming more personalized), in a weekly email and on the restaurant’s profile page.

Consumers, meanwhile, can follow restaurants to see these updates, but Yelp also shows them to users who have indicated interest in a restaurant by making a reservation, joining its waitlist or bookmarking its profile.

Of course, restaurants are already posting this kind of information on social media, but Wright said Yelp allows them to reach “a high-intent audience” — people who aren’t just browsing for updates from their friends, but are actually looking to go out for a meal.

Guang Yang, the group product manager for Yelp Reservations and Waitlist, also noted that restaurants can set end dates for their Yelp posts, which could make them more comfortable sharing things like limited-time menus.

Yelp Connect will cost $199 per month for U.S. restaurants, but is available for a limited time at a price of $99 per month.

Wright described this is part of a broader evolution at Yelp, where “you don’t just want to discover a great restaurant, you want to transact [with] that restaurant.” So the company has added things like reservations, with Connect serving as “the final piece of that journey,” allowing restaurants to continue reaching out to consumers after their visit. 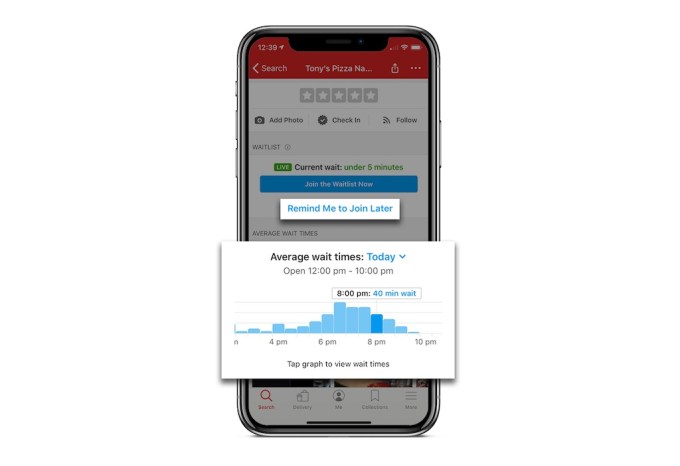 In addition to launching Connect, Yelp is also announcing an upgrade to its Waitlist feature, which allows consumers to see the current estimated wait time at a restaurant, and to join the queue directly from the Yelp app.

Yang said Yelp can now use real wait time data from a restaurant to predict the average wait at a given time — so if you want to get dinner tonight at 7pm, Yelp can tell how long you’ll probably have to wait. (These estimates are based on a party size of two; you’ll enter your real party size and get an updated estimate when you actually join the waitlist.)

Yelp is also using these predictions to power an additional feature called Notify Me. If you want to get seated at a certain restaurant at a certain time, you can hit a button to get a notification that will prompt you to join the waitlist at the right time — if you want to eat at 7pm, and the average wait time at 7pm is an hour, then you’ll get a notification at 6pm.

Yang said the algorithm is “pretty sophisticated,” and even incorporates some of the common situations that can confound these estimates, like kitchen closing times, or popular restaurants that have long a waitlist as soon as they open.

Still, he acknowledged that there will be times when the actual is different from what’s predicted, which may be challenging when you’ve told all your friends to meet you somewhere at a given time. But in those cases, he said most restaurants “acknowledge and understand, ‘Oh, something happened, wait time changed,’ ” and they’ll make accommodations if you show up later.

Yelp adds portfolios and highlights to its business profiles