Fans of sci-fi and fringe tech may already be familiar with the idea of the “space elevator,” which is pretty much exactly what it sounds like — and totally impossible with today’s technology. But a pair of scientists think they’ve found an alternative: a Moon elevator. And it’s slightly less insane… technically.

The idea of the space elevator, first explored in detail by Arthur C. Clarke in his novel “The Fountains of Paradise,” is essentially a tower so tall it reaches space. Instead of launching ships and materials from the surface of the Earth to orbit, you just put them in the elevator of this tower and when they reach the top, somewhere about 26,000 miles up in geosynchronous orbit, they’re already beyond gravity’s pull, for all intents and purposes.

It’s a fun idea, but the simple fact is that this tower would need to be so strong to support its own weight, and that of the counterweight at the far end, that no known material or even reasonably hypothetical one will do it. Not by a long shot. So the space elevator has remained well on the “fiction” side of science fiction since its first proposal. Hasn’t stopped people from patenting it, though.

But what if I told you that we could make a space elevator even bigger, with materials available today? You’d say I am completely unqualified to engineer such a structure — and you’d be right. But two astronomers from Cambridge and Columbia Universities think they’ve got an alternative. They call it the Spaceline.

The secret is in abandoning the entire concept of anchoring the space elevator to the surface of the Earth. Instead they propose a tower or cable extending the other direction: From the surface of the Moon to geosynchronous orbit around the planet.

Unsurprisingly, this idea has been put out there before, as early as the ’70s. But as Zephyr Penoyre and Emily Sandford put it in their paper:

We present the derivations herein as a full standalone mathematical and physical description of the concept, one that we and authors before us have been surprised to find is eminently plausible and may have been overlooked as a major step in the development of our capacity as a species to move within our solar system. 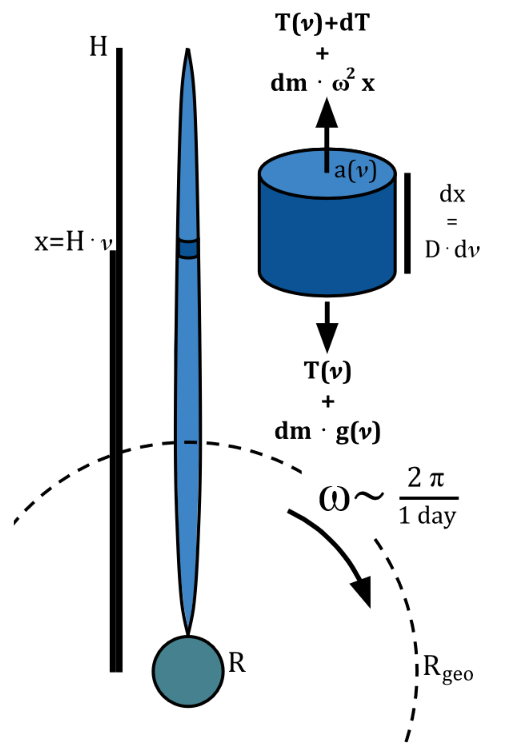 Math by Cambridge and Columbia. Diagram by MS Paint.

In other words, others have suggested it before, but they did the math. And it actually works out. And it might only cost a few billion dollars.

The Spaceline would be more like a skyhook than a tower. A thin, strong piece of material (think the width of a pencil lead) that extends about 225,000 miles from the surface of the Moon to a safe distance above the planet, where it won’t interfere with satellites or encounter our pesky atmosphere.

Anyone interested in going to the Moon would simply launch to the correct orbit height and sync up with the tip of the Spaceline, where there would no doubt be a station of some kind. From there they could use solar-powered propulsion to zip along the line, no fuel required. At the other end, they simply slow down and have a soft landing at lunar orbit or whatever surface facility we put on the regolith there.

Importantly, the Spaceline would pass through the Earth-Moon Lagrange point, where there is effectively zero gravity and no other physical interference, making construction and storage a snap.

Having only a small team of scientists and engineers at such a base camp would allow hand construction and maintenance of a new generation of space based experiments – one could imagine telescopes, particle accelerators, gravitational wave detectors, vivariums, power generation and launch points for missions to the rest of the solar system.

Sounds nicer than the tiny Lunar Gateway NASA has planned.

While the researchers say this is “not idle theorycrafting,” it most certainly is, with the caveat that the theory is more realistic than a famously unrealistic one no one takes seriously. Still, the possibility is tantalizing now that someone has crunched the numbers. Perhaps one of these space-bound billionaires will make a Moon elevator their next passion project.