In December, Amazon launched a crowdsourced Q&A platform into beta with the goal of improving Alexa’s ability to answer questions. That feature, Alexa Answers, is now live to all. Amazon says the feature was well-received by the early community of invite-only participants, who have since contributed hundreds of thousands of answers that have been shared with Alexa customers millions of times.

To differentiate these answers from other Alexa responses, they’re attributed to “an Amazon customer.”

As the company explained at launch, there are thousands of answers that had previously stumped Alexa, like “Where was Barbara Bush buried?,” “Who wrote the score for Lord of the Rings?,” “What’s cork made out of?,” and “Where do bats go in the winter?”

Though Alexa should have the ability to answer some of these sorts of questions thanks to its integrations with Bing and other sources, it falls short in many areas.

The ability to answer common questions like the above is currently one of Google Assistant’s stronger features, thanks to the years Google spent building up a Knowledge Graph that’s based on a web’s worth of data.

Meanwhile, Amazon’s decision to quickly ramp up its own database of answers by way of crowdsourcing opens itself up to many potential challenges, including most notably, abuse and inaccuracy.

As anyone who uses crowdsourced Q&A platforms like Yahoo Answers or Quora could tell you, the most upvoted answers aren’t always the best or most accurate. In some cases, they’re also profane. In addition, when users are incentivized to answer questions by way of some sort of rewards system, some will attempt to answer as many as possible in order to be designated as a “top contributor.” But they may not always be the best person to answer the questions they’re plowing through.

Amazon is attempting to address these problems with a platform that uses automatic filtering to catch the inappropriate and offensive content and language, along with a community platform where answers are rated and the best are then shared by Alexa, earning the person who answered the question some points. 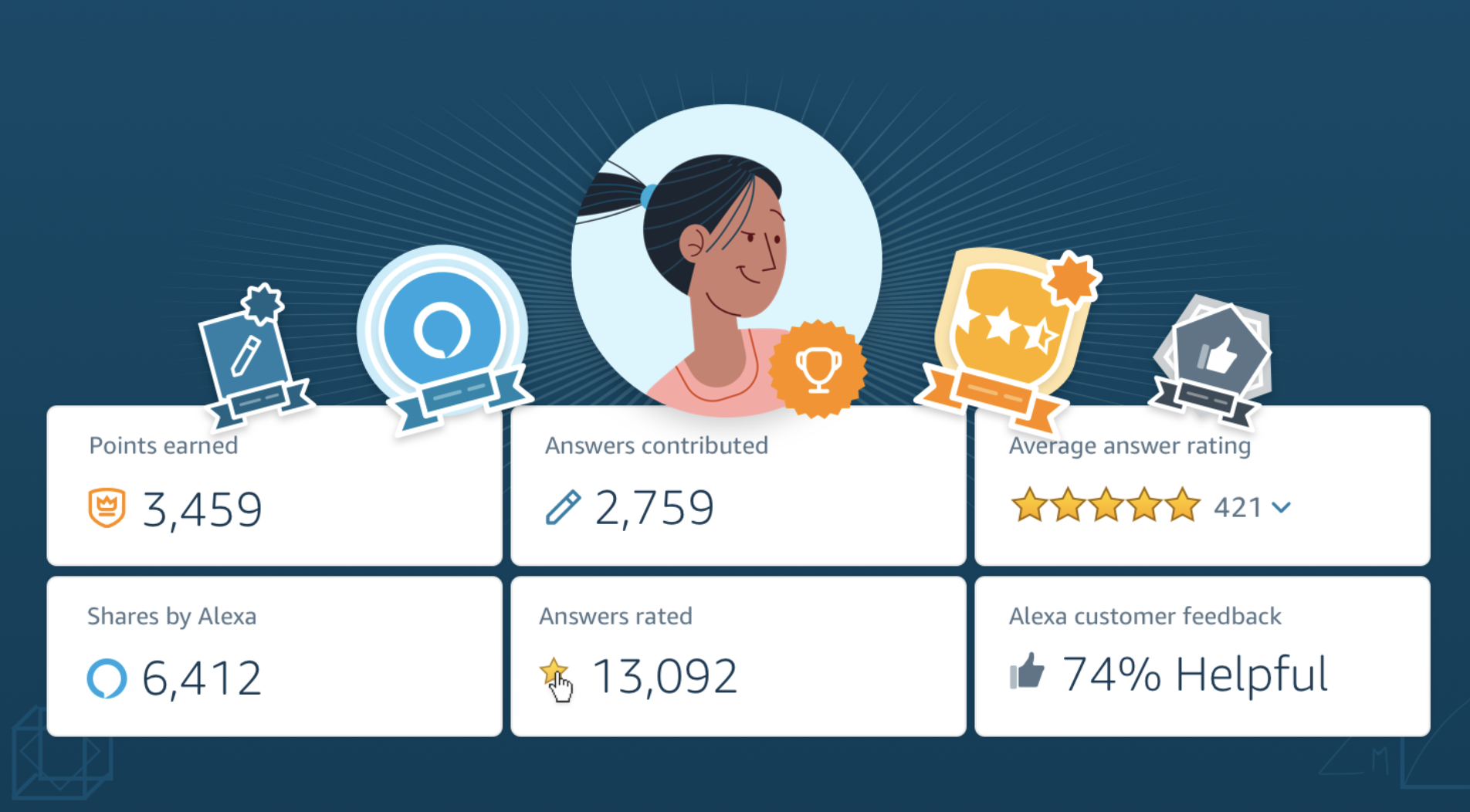 Before, this community was limited to a smaller number of invitees.

Today, any Amazon account holder can sign in and begin contributing. You can then see a list of questions available and choose to filter them based on things like “most frequently asked,” or “newest” or by other topic areas. After you submit an answer, you earn points toward monthly and weekly leaderboards and badges based on how many questions you’ve answered, how many times it’s been shared with Alexa users and more.

“This new feature is just one example of the many ways we’re continuously working to grow Alexa’s knowledge,” an Amazon spokesperson said. “As always, we’ll continue to evolve the experience based on customer feedback.”

There haven’t been any reports of abuse of this feature so far, but it hadn’t been so broadly available. It’s unclear, however, if Amazon has in place strong enough protections against those who like to disrupt online communities just for the sake of watching them burn.

While crowdsourcing isn’t necessarily a bad idea — Wikipedia turned out well, for example — it’s an area that requires a lot of oversight. In Wikipedia’s case, that comes down to an elite group of editors who handle much of the site’s content. Alexa Answers may not be able to create the same sort of self-policed system, given it pits community members against one another with its leaderboards. Gamification like this doesn’t always lead to collaboration and support.

A better model may have been that of Reddit’s with virtual currency and tiered rewards, and moderation by topical area from strong community leads. But growing a community organically takes time and effort. And today’s voice assistants are engaged in sprints, not marathons, when it comes to one-upping one another by feature set.

The Alexa Answers feature is open for everyone at alexaanswers.amazon.com/about.