Today, social networks Twenty and Mappen are joining together in a merger under the Twenty brand.

From the beginning, Twenty’s goal has been to get young people off of their phones and out in the real world with their friends. Twenty connects users with their friend groups and lets them browse fun experiences, from concerts to sports games to movies, with an easy UI for coordinating a group and making it happen. In fact, Twenty has forged relationships with orgs like Live Nation, Endeavor, Roc Nation and Tao, which collectively produce 10,000+ events a year with an audience of more than 100 million fans.

Mappen, on the other hand, is a location-based social network that let users share what they were doing (and where they were doing it) with their friends. For example, users could give a status update using a Fortnite emoji tagged to their house, inviting friends to come over and play a few games.

The two companies have been in talks, and collaborating, for the past nine months looking for ways to bring the experiences together. Where Twenty has relationships with experience providers, Mappen had the audience of young people looking to connect with each other.

The end result is an all-stock deal that unifies the user experience under the Twenty brand name. 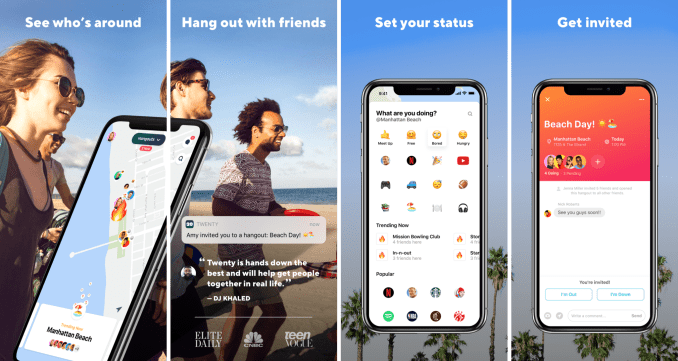 Though the announcement of the merged app didn’t go down until today, the two apps have been combined for a while, and CEO Diesel Peltz says the new app has seen 33% month over month growth in new users. Hangouts have increased 50% from July to August. Peltz will lead the combined company as CEO.

For now, the new Twenty does not have a business model in place. However, the plan is to use the event partnerships to generate revenue as opposed to ads, which relies on eyeballs on screens.

“If the model is solely based on ads, you want the users to spend as much time on the platform as possible,” said Peltz. “We’re looking to create a different opportunity for people to access these experiences.”