Daniel Levine Contributor
Daniel Levine is a partner at Accel. He joined the firm in 2010 and focuses on product-first startups aimed at consumers, developers, and bottoms-up business users.

While the software revolution started out slowly, over the past few years it’s exploded and the fastest-growing segment to-date has been the shift towards software as a service or SaaS.

SaaS has dramatically lowered the intrinsic total cost of ownership for adopting software, solved scaling challenges and taken away the burden of issues with local hardware. In short, it has allowed a business to focus primarily on just that — its business — while simultaneously reducing the burden of IT operations.

Today, SaaS adoption is increasingly ubiquitous. According to IDG’s 2018 Cloud Computing Survey, 73% of organizations have at least one application or a portion of their computing infrastructure already in the cloud. While this software explosion has created a whole range of downstream impacts, it has also caused software developers to become more and more valuable.

The increasing value of developers has meant that, like traditional SaaS buyers before them, they also better intuit the value of their time and increasingly prefer businesses that can help alleviate the hassles of procurement, integration, management, and operations. Developer needs to address those hassles are specialized.

They are looking to deeply integrate products into their own applications and to do so, they need access to an Application Programming Interface, or API. Best practices for API onboarding include technical documentation, examples, and sandbox environments to test.

APIs tend to also offer metered billing upfront. For these and other reasons, APIs are a distinct subset of SaaS.

For fast-moving developers building on a global-scale, APIs are no longer a stop-gap to the future—they’re a critical part of their strategy. Why would you dedicate precious resources to recreating something in-house that’s done better elsewhere when you can instead focus your efforts on creating a differentiated product?

Thanks to this mindset shift, APIs are on track to create another SaaS-sized impact across all industries and at a much faster pace. By exposing often complex services as simplified code, API-first products are far more extensible, easier for customers to integrate into, and have the ability to foster a greater community around potential use cases. 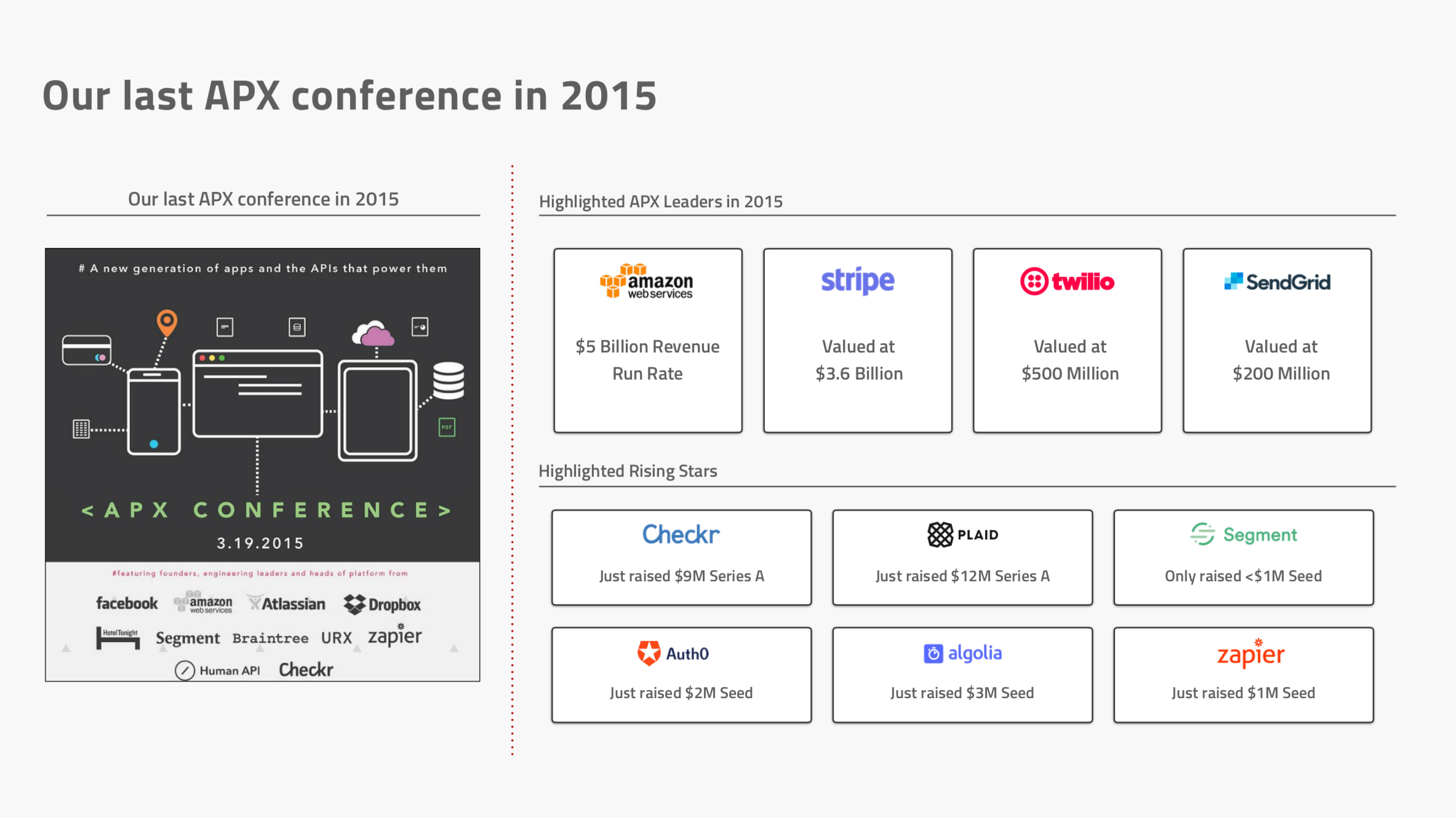 Whether you realize it or not, chances are that your favorite consumer and enterprise apps—Uber, Airbnb, PayPal, and countless more—have a number of third-party APIs and developer services running in the background. Just like most modern enterprises have invested in SaaS technologies for all the above reasons, many of today’s multi-billion dollar companies have built their businesses on the backs of these scalable developer services that let them abstract everything from SMS and email to payments, location-based data, search and more.

Simultaneously, the entrepreneurs behind these API-first companies like Twilio, Segment, Scale and many others are building sustainable, independent—and big—businesses.

Valued today at over $22 billion, Stripe is the biggest independent API-first company. Stripe took off because of its initial laser-focus on the developer experience setting up and taking payments. It was even initially known as /dev/payments!

Stripe spent extra time building the right, idiomatic SDKs for each language platform and beautiful documentation. But it wasn’t just those things, they rebuilt an entire business process around being API-first.

Companies using Stripe didn’t need to fill out a PDF and set up a separate merchant account before getting started. Once sign-up was complete, users could immediately test the API with a sandbox and integrate it directly into their application. Even pricing was different.

Stripe chose to simplify pricing dramatically by starting with a single, simple price for all cards and not breaking out cards by type even though the costs for AmEx cards versus Visa can differ. Stripe also did away with a monthly minimum fee that competitors had.

Many competitors used the monthly minimum to offset the high cost of support for new customers who weren’t necessarily processing payments yet. Stripe flipped that on its head. Developers integrate Stripe earlier than they integrated payments before, and while it costs Stripe a lot in setup and support costs, it pays off in brand and loyalty.

Checkr is another excellent example of an API-first company vastly simplifying a massive yet slow-moving industry. Very little had changed over the last few decades in how businesses ran background checks on their employees and contractors, involving manual paperwork and the help of 3rd party services that spent days verifying an individual.

Checkr’s API gives companies immediate access to a variety of disparate verification sources and allows these companies to plug Checkr into their existing on-boarding and HR workflows. It’s used today by more than 10,000 businesses including Uber, Instacart, Zenefits and more.

Like Checkr and Stripe, Plaid provides a similar value prop to applications in need of banking data and connections, abstracting away banking relationships and complexities brought upon by a lack of tech in a category dominated by hundred-year-old banks. Plaid has shown an incredible ramp these past three years, from closing a $12 million Series A in 2015 to reaching a valuation over $2.5 billion this year.

Today the company is fueling an entire generation of financial applications, all on the back of their well-built API. 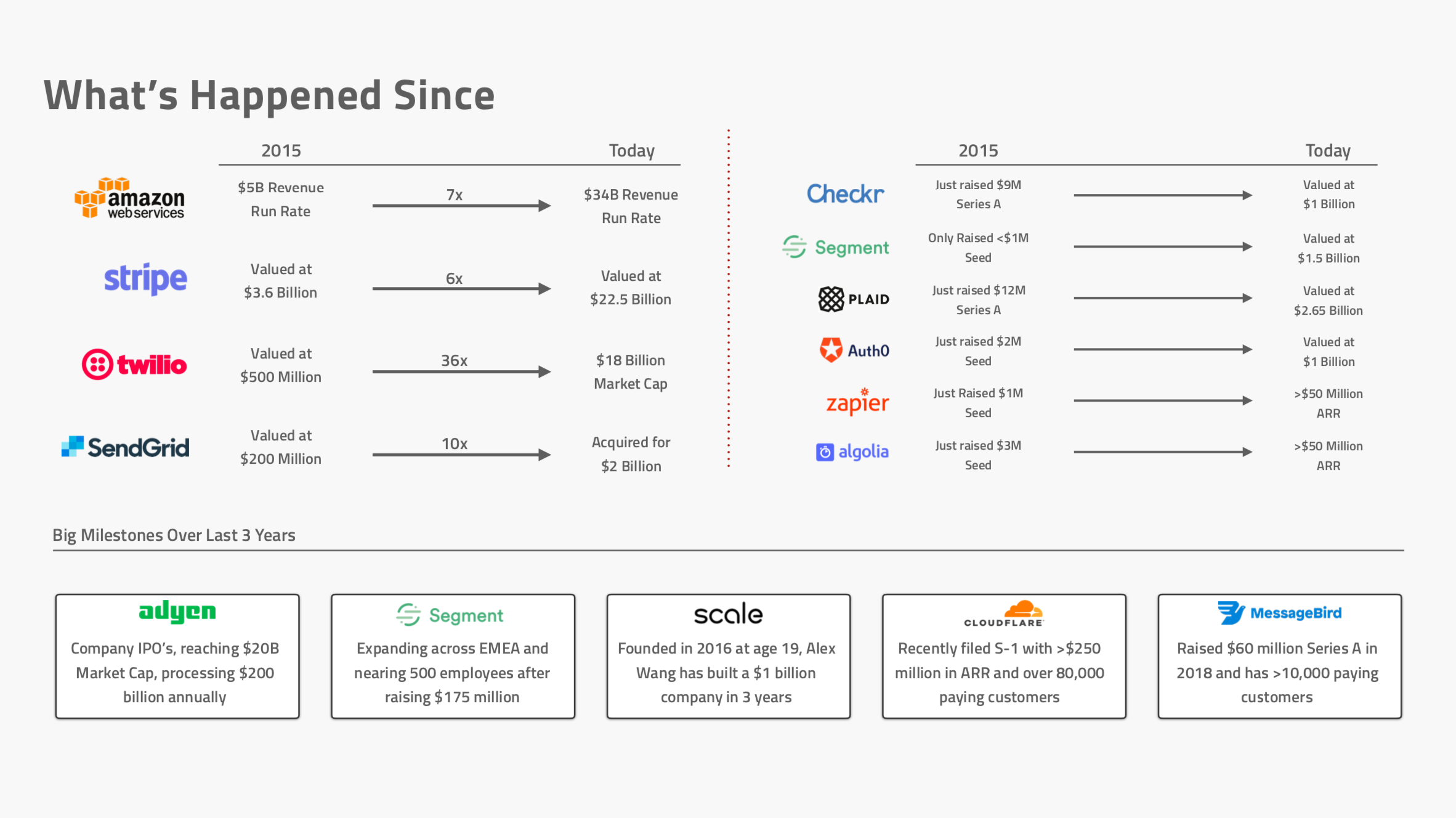 Accel’s first API investment was in Braintree, a mobile and web payment systems for e-commerce companies, in 2011. Braintree eventually sold to, and became an integral part of, PayPal as it spun out from eBay and grew to be worth more than $100 billion. Unsurprisingly, it was shortly thereafter that our team decided to it was time to go big on the category. By the end of 2014 we had led the Series As in Segment and Checkr and followed those investments with our first APX conference in 2015.

Plaid, Segment, Auth0, and Checkr had only raised Seed or Series A financings! And we are even more excited and bullish on the space. To convey just how much API-first businesses have grown in such a short period of time, we thought it would be useful perspective to share some metrics over the past five years, which we’ve broken out in the two visuals included above in this article.

While SaaS may have pioneered the idea that the best way to do business isn’t to actually build everything in-house, today we’re seeing APIs amplify this theme. At Accel, we firmly believe that APIs are the next big SaaS wave — having as much if not more impact as its predecessor thanks to developers at today’s fastest-growing startups and their preference for API-first products. We’ve actively continued to invest in the space (in companies like, Scale, mentioned above).

And much like how a robust ecosystem developed around SaaS, we believe that one will continue to develop around APIs. Given the amount of progress that has happened in just a few short years, Accel is hosting our second APX conference to once again bring together this remarkable community and continue to facilitate discussion and innovation. 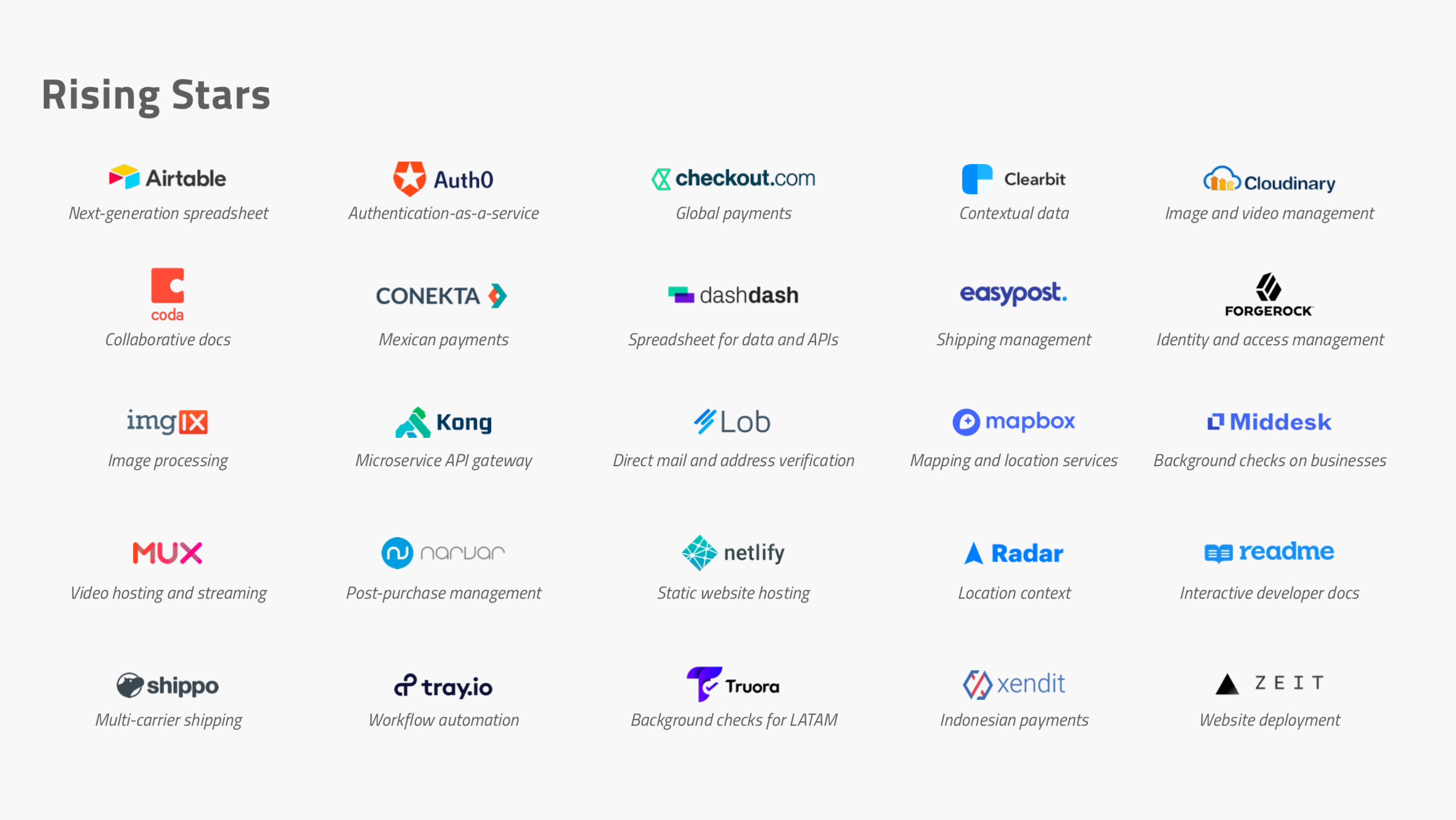