Last year, Roku entered the speaker business with the debut of the Roku TV Wireless Speakers. Today, it’s expanding its portfolio of audio products with the launch of two new products: the Roku Smart Soundbar and Roku Wireless Subwoofer, both at $180 each. Like the wireless speakers, the soundbar and subwoofer are meant to give consumers a way to improve their overall streaming experience by upgrading their sound. But unlike last year’s speakers, the products will work with any TV — not just Roku’s own brand.

“We have these fantastic, new 4K giant TVs that don’t really have space for good speakers,” explained Roku VP of Product Management Mark Ely, as to why Roku wanted to expand further into audio. “And that’s compounded by audio volume levels that have been all over the map, from loud commercials to really quiet dialog passages in movies. That has people constantly hitting the volume controls on the remote.”

Roku has been trying to address these issues by investing in smart audio solutions, like its easy-to-pair speakers offering premium sound and its Automatic Volume Leveling technology that lowers the sound for you in loud scenes and raises it when it gets too quiet.

With the Roku Smart Soundbar, the company is offering a similar feature set in a different form factor.

The new device itself is also powered by Roku OS, offers simple setup and includes four premium drivers to provide better clarity and depth and dynamic bass response, says Roku. With Night Mode, the soundbar lowers the volume for louder scenes and boosts it for quiet ones. Speech Clarity boosts the voice frequencies to make it easier to hear the dialog.

It also supports Dolby Audio and can connect by way of an HDMI ARC port or HDMI and optical audio input. And it offers a Bluetooth connection, so you can stream music, podcasts and other audio programs from a Bluetooth-compatible device.

The “smart” part of the speaker also has to do with its ability to listen and respond to voice commands, which lets you do things like launch channels or entertainment, turn on or off the captions, replay scenes and more, when using the included Roku Voice Remote. It additionally supports connections with either the Google Assistant or Amazon Alexa, if you use their smart devices in your home.

This is either a perk of using Roku over Amazon Fire TV or a drawback, depending on your point of view.

On the one hand, the option to integrate with either of the top smart voice assistants is useful. But on the other hand, Roku’s own voice tech is not as advanced as Alexa or Google Assistant, as it’s focused more on the TV experience and related commands. That can lead to a wonky experience when you try to use Roku via Alexa, for instance, and the poor reviews for Roku’s Alexa skill demonstrate the downside of this sort of integration. 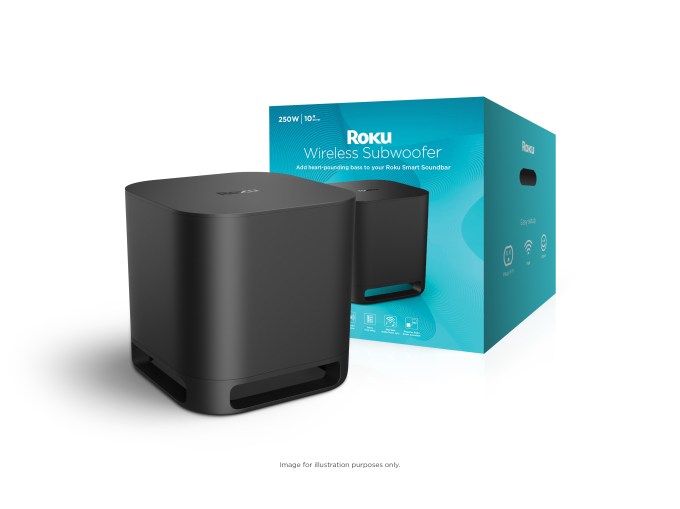 The second new product, the Roku Wireless Subwoofer, is designed for people who want a more theater-like experience at home.

Like the speakers, the setup is simple and involves just holding down the home button to pair the device and get up-and-running. Currently, it works with the brand-new Wireless Soundbar, but the Roku Wireless Speakers will get an update in the next few months to add compatibility with the subwoofer.

The company believes the soundbar will be a good alternative for non-Roku TV customers as well as those who don’t have space for the bookshelf-style wireless speakers it previously sold. Meanwhile, the subwoofer will better cater to those looking for a home theater-type experience at a reasonable price point.

More broadly, the new hardware significantly expands Roku’s entry into premium audio, and its investment in the hardware side of its business.

This is no longer the area that delivers the majority of the company’s revenue. Instead, Roku’s platform business, led by advertising, has out-earned hardware sales for the past five quarters. In Q2, Roku beat on earnings with $250.1 million in revenue, versus $224.4 million expected, and it was advertising that drove that rise.

That said, Roku’s hardware is performing well, in terms of consumer acceptance. Roku is now the top streaming platform in the U.S., and more than 1 in 3 smart TVs in the U.S. are Roku TVs.

Neither of the new devices were offered for testing, but they are available for pre-order starting today from Roku.com, with plans to ship by October. They’ll also be available for purchase at Best Buy at that time. Both are priced at $179.99 MSRP. (For comparison’s sake, the Wireless Speakers are $199.).

Full specs are below.