The NFL and social video app TikTok today announced a multi-year partnership to bring NFL content to worldwide fans, just ahead of the NFL’s 100th season kickoff on September 5. The partnership includes the launch of an official NFL account on the video platform, as well as a series of NFL-themed hashtag challenges and other marketing opportunities for brands around the NFL content.

The first hashtag challenge, #WeReady, starts today and runs through Thursday. It encourages fans to show pride for their favorite NFL team while using the #WeReady hashtag. Several popular TikTok creators and NFL clubs will join the fans in the challenge.

TikTok will also have a presence at Soldier Field in Chicago for the September 5 kickoff, where TikTok fans will be about to create videos and show their love for teams and players in an NFL-themed experience.

At launch, the NFL’s TikTok account already features several videos, ranging from behind-the-scenes action to highlights, to funny memes and even inspirational content. 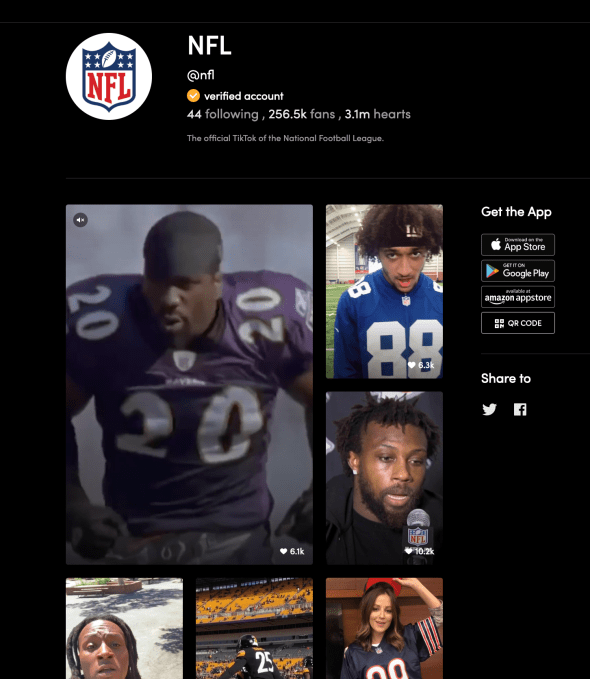 “We’re thrilled to partner with a powerhouse in the sports industry like the NFL to bring new life and a fresh perspective to the sports entertainment experience,” said Mayan Scharf, Global Partnerships, TikTok. “TikTok is a destination where fans can feel like they are a part of the team and we look forward to showcasing content from the NFL that is exciting, authentic and surprising to TikTok community,” she said.

While TikTok is better known for its meme-like, short-form videos featuring lip-syncing, displays of talent like dance, cosplay, comedy, art and more, the company says that sports content is also a popular category on its service.

The NFL, meanwhile, is not averse to jumping on early with emerging platforms — whether that’s live-streaming video on Twitter, being the first sports league on Snapchat Discover or launching an Alexa voice app, for example.

In addition, the NFL looks for opportunities that give it the ability to reach international fans, like when it distributed game highlights and recaps on Facebook. This is of particular importance at a time when ratings have become more of a concern for the sports league. Though it finally recovered last season from a multi-year ratings slump, the NFL knows that fans outside the U.S. are also worth courting as they can be just as loyal and engaged.

“Partnering with TikTok is a natural extension of our media strategy,” said Blake Stuchin, vice president, Digital Media Business Development for the NFL, in a statement. “The platform reaches a fast-growing global audience of NFL fans and future fans. The NFL programming and hashtag challenges are a perfect way to kick off the NFL’s 100th season – with fun, new content that will entertain fans and invites them to celebrate and experience their NFL fandom in a way that’s authentic to the unique experience of TikTok,” he said.