OpenGov, the firm co-founded by Palantir’s Joe Lonsdale that helps government and other civic organizations organise, analyse and present financial and other data using cloud-based architecture, has raised another big round of funding to continue expanding its business. The startup has picked up an additional $51 million in a Series D round led by Weatherford Capital and 8VC (Lonsdale’s investment firm), with participation from existing investor Andreessen Horowitz.

The funding brings the total raised by the company to $140 million, with previous investors in the firm including JC2 Ventures, Emerson Collective, Founders Fund and a number of others. The company is not disclosing its valuation — although we are asking — but for some context, PitchBook noted it was around $190 million in its last disclosed round — although that was in 2017 and has likely increased in the interim, not least because of the startup’s links in high places, and its growth.

And in terms of its growth, OpenGov says today it counts more than 2,000 governments as customers, with recent additions to the list including the State of West Virginia, the State of Oklahoma, the Idaho State Controller’s Office, the City of Minneapolis MN, and Suffolk County NY. For comparison, when we wrote in 2017 about the boost the company had seen since Trump’s election (which has apparently seen a push for more transparency and security of data), the company noted 1,400 government customers.

Government data is generally associated with legacy systems and cripplingly slow bureaucratic processes, and that has spelled opportunity to some startups, who are leveraging the growth of cloud services to present solutions tailored to the needs of civic organizations and the people who work in them, from city planners to finance specialists. In the case of OpenGov, it packages its services in a platform it calls the OpenGov Cloud.

“OpenGov’s mission to power more effective and accountable government is driving innovation and transformation for the public sector at high speed,” said OpenGov CEO Zac Bookman in a statement. “This new investment validates OpenGov’s position as the leader in enterprise cloud solutions for government, and it fuels our ability to build, sell, and deploy new mission-critical technology that is the safe and trusted choice for government executives.” 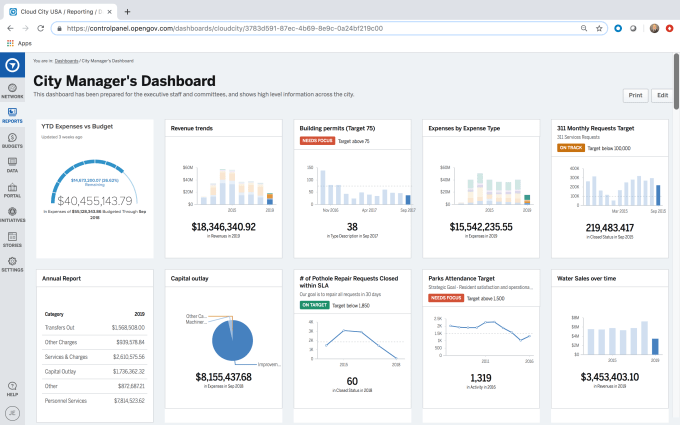 It’s also, it seems, a trusted choice for government executives who have left public service and moved into investing, leveraging some of the links they still have into those who manage procurement for public services. Weatherford Capital, one of the lead investors, is led in part by managing partner Will Weatherford, who is the former Speaker of the House for the State of Florida.

“OpenGov’s innovative technology, accomplished personnel, market leadership, and mission-first approach precisely address the growing challenges inherent in public administration,” he said in a statement. “We are thrilled at the opportunity to partner with OpenGov to accelerate its growth and continue modernizing how this important sector operates.”

It will be interesting to see how and if the company uses the funding to consolidate in its particular area of enterprise technology. There are other firms like LiveStories that have also been building services to help better present civic data to the public that you could see as complementary to what OpenGov is doing. OpenGov has made acquisitions in the past, such as Ontodia to bring more open-source data and technology into its platform.