The traditional world of publishing has been challenged hard by the digital revolution. Reading as a pastime has been in significant decline, in part because of the proliferation of screens and options for what to watch and do on them. On the other hand, Amazon has led the charge in changing the economics of publishing: the returns on book sales, and profits to publishers and writers, have all seen margins squeezed in the e-reader universe.

A Berlin-based startup called Inkitt has built a crowdsourced publishing platform to buck those trends. It believes that there is still a place for reading in our modern world, if it’s presented in the right way (more on that below), and today it is announcing a $16 million round of funding that underscores its success to date — the Inkitt community today has 1.6 million readers and 110,000 writers with some 350,000 uploaded stories, with a run-rate of $6 million from a new “bite-sized”, immersive reading app it launched earlier this year called Galatea — and its ambitions going forward.

How big are those ambitions? Ali Albazaz, Inkitt’s founder and CEO, said the mission is to build the “Disney of the 21st century.” Digital novels are just the beginning, in his view: plans include a move into audio, TV, games and film, “and maybe even theme parks.”

But before we ride a rollercoaster based on The Millennium Wolves — one of the best sellers on the platform, with $1 million in sales in the first six months of its release; 24-year-old author Sapir Englard is using her royalties to finance her jazz studies at Berklee in Boston, Massachusetts — Inkitt is starting small.

In addition to continuing to search for authors that might make good Galatea fodder, it’s going to add 10 new languages in addition to English, along with more data science to improve readership and connecting audiences with the stories that are most engaging to them. The company has sourced some of its most successful works from places like India and Israel, so the thinking is that it’s time to make sure non-English readers in those countries are also getting a look in.

“It’s a long plan, and we’re working on it step by step,” Albazaz said in an interview this week. “We are looking for the best talents and the best stories, wherever they are being told. We want to find them, unearth them and turn them into globally successful franchises.”

The Series A is being led by Kleiner Perkins, with participation also from HV Holtzbrinck Ventures, angel investor Itai Tsiddon, Xploration Capital, Redalpine Capital, Speedinvest, and Earlybird. Inkitt is not disclosing its valuation, but it had raised $5 million before this (including this seed round led by Redalpine).

Fiction for the people

Inkitt got its start several years ago with a very basic idea: an app for people (usually unsigned authors) to upload excerpts of fictional works in progress, or entire fiction manuscripts — novels specifically — to connect them with readers to provide feedback. It would gather data that it collected from these readers to provide more insights into what people wanted to read, to feed its algorithm, and to give feedback to the writers.

It was a simple concept that competed with a plethora of other places where unpublished writers can get their work out there (including Kindle).

But then, six months ago, that concept of data-based, crowdsourced writing and reading took an interesting turn with the launch of Galatea.

With this, Inkitt selects the stories that perform the best on its first app — most readers, most often completed reading, best feedback, most recommended, and so on — and its in-house team of editors and developers reformat them for Galatea as short-form, bite-sized “mini episodes” that come with specific effects attuned to each page you read to make the experience more immersive.

This includes features like sound, haptic effects like the phone vibrating with crashes and heartbeats, fire spreading across the screen in a burning moment, and a requirement for users to swipe to proceed to the next section. (It’s a fitting name for the app: Galatea was the ivory statue that Pygmalion carved that came to life.) 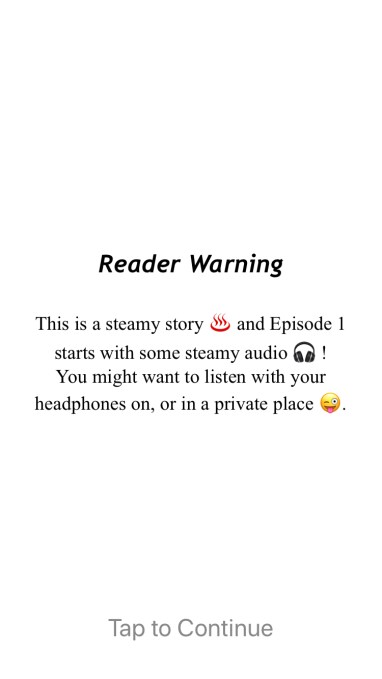 As Albazaz describes it, Galatea was created as a response to the generation of consumers whose attention is constantly being diverted through notifications, and who have become used to getting information in short bursts.

“Nowadays you have Snapchat, Instagram and the rest, and they all send you notifications, but when you read you need a lot of attention,” he said.

So the solution was to cut down the page size to a paragraph at a time.

“Instead of flipping pages as you would on an e-reading app, you flip paragraphs.” These take up no more than about 20% of the screen, he said.

A reader gets one “episode” (about 15 minutes of reading, with several pages of text) free every day, so in theory you could read books on Galatea without paying anything, but typically people buy credits to continue reading a bit more than that each day, and it works out on average to about $12 per book in revenue. Inkitt is now adding multiple thousands of users (installs) each day across its two apps.

In addition to making this about tailoring a reading app to what consumers are most likely to do on a screen today, it’s about rethinking the model for how to source literature to disseminate in the first place.

“We all love stories and the way we create and consume them is evolving continuously,” said KP partner Ilya Fushman. “Inkitt’s rich and dynamic story format is rapidly capturing the imagination of a new generation of readers. Their content marketplace is connecting consumers with authors around the globe to entertain and democratize publishing.”

To date, the focus has very much been on original content that Inkitt has sourced itself. The basic model leaves a lot on the table, though. For one, what about all of the literature that has already been published in the world that either hasn’t really hit the right chord yet with readers, or classics, or popular works that might just be a little more interesting with the Galatea treatment?

On the other hand, the Galatea model seems to be inherently biased towards the most obvious “hits” — page turners that are engaging from the get-go, or are written on themes that have already proven to be popular. What about the wider body of literature that might not be accessible page-turners but are definitely worthwhile reading, stories that might one day become a part of the literary canon. For every Harry Potter series, some still want and need a Finnegan’s Wake or Milkman.

Albazaz has an answer for both of those: he says that his startup has already been approached by a number of publishers to work on ways of using its platform for their own works, and so that is something you might imagine will get turned on down the line. And he acknowledged the blockbuster element of the work on the platform now, but said that as it grows and scales its audience, it will be looking for works that appeal to a wider range of tastes.

The company’s business is a veritable David to Amazon’s Goliath, but one thing Inkitt has going for it is that it offers those who will take a chance on its platform a promise of making a good return.

Albazaz claims that the average writer on Galatea earns 30 to 50 times more than what would be earned via Amazon, which he calls “a horrible partner to work with as a publisher.” He wouldn’t comment exactly on the royalties split is on Inkitt, or whether that higher figure is due to more readers or a better cut (or both), except that he said that there are simply “more readers” of your work, “making you more money.”

It’s also a more flexible platform in another regard: if you want to publish elsewhere at the same time, you can. “No one is locked in,” he said. “Our mission statement, which we have across the wall in our office, is to be the fairest and most objective publisher. That’s the only way you will discover hidden talents.”