A number of Uber and Lyft drivers are protesting outside Uber’s San Francisco headquarters today to demand the passage of Assembly Bill 5 and the right to unionize.

“What do we want? AB-5! When do we want it? Now!” That was one of the phrases drivers chanted outside Uber’s HQ this afternoon.

This was part of a three-day caravan across California organized by Gig Workers Rising and Mobile Workers Alliance. As part of the protest, hundreds of drivers circled the blocks around Uber’s HQ honking their horns and sporting signs that say “AB5 + a union.”

Adan, an Uber and Lyft driver, took the microphone to remind the companies and the California state legislature that people matter, they are not machines and should not be “chained to an app,” he said at the protest.

“They say that these technology companies are the future of the American workforce,” Buttigieg said. “I think that might be right. So do we want a future where there are no protections, no unions and workers are not treated as workers or do we want a future with justice?”

The aim of the caravan is to rally drivers throughout California to advocate for their collective rights and make it clear to legislators they want AB-5 to pass. AB-5 seeks to codify the ruling established in Dynamex Operations West, Inc. v Superior Court of Los Angeles. In that case, the court applied the ABC test and decided Dynamex wrongfully classified its workers as independent contractors based on the presumption that “a worker who performs services for a hirer is an employee for purposes of claims for wages and benefits…” 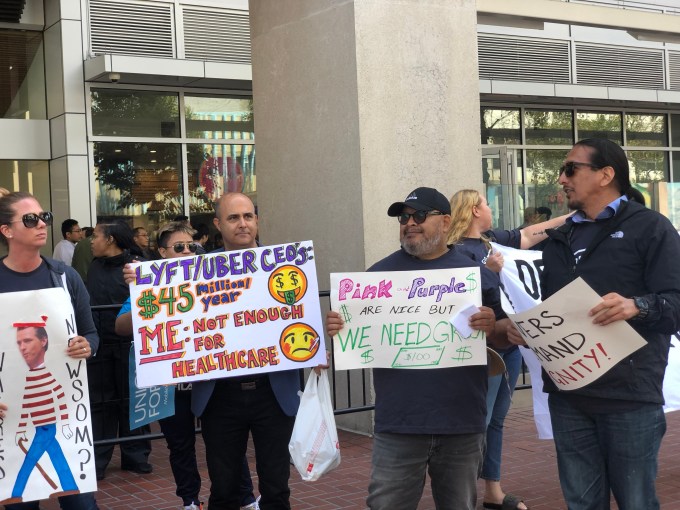 Those who work as 1099 contractors can set their own schedules, and decide when, where and how much they want to work. For employers, bringing on 1099 contractors means they can avoid paying payroll taxes, overtime pay, benefits and workers’ compensation.

According to the ABC test, in order for a hiring entity to legally classify a worker as an independent contractor, it must prove the worker is free from the control and direction of the hiring entity, performs work outside the scope of the entity’s business and is regularly engaged in an “independently established trade, occupation, or business of the same nature as the work performed.”

In short, AB-5, which has already passed in the California State Assembly, would ensure gig economy workers are entitled to minimum wage, workers’ compensation and other benefits. 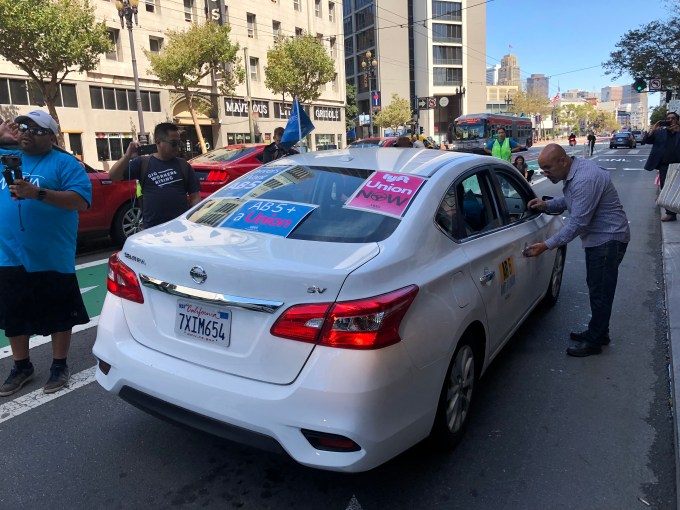 Today represents the third protest at Uber’s HQ since May, when drivers protested ahead of Uber’s IPO. Their demands have remained consistent, asking for better wages, benefits, transparent policies, a voice and the right to form a union. The protest also comes shortly after Jalopnik found discrepancies between how much Uber and Lyft say they pay their drivers versus how much they actually do.

But neither Lyft nor Uber wants AB-5 pass. Uber says drivers tell the company what they value most is the flexibility to work whenever, wherever and for whomever they want.

“We believe that independent, on-demand workers should not have to sacrifice security to enjoy that flexibility,” an Uber spokesperson told TechCrunch. “That’s why we’ve been working with stakeholders to find a path forward that provides a minimum earnings guarantee for drivers; a robust package of portable benefits they can access no matter which rideshare company they drive for; and meaningful representation that gives them a say on matters affecting their lives and livelihood.”

Similarly, Lyft says it’s advocating for an approach that is in line with the interests of its drivers, which would entail flexibility and benefits.

“That’s why we’ve been working with lawmakers and labor leaders on a different solution, so drivers can continue to control where, when, and how long they drive, while also having some basic protections like a minimum earnings floor, a system of worker-directed portable benefits, and representation,” the spokesperson said.

It’s worth noting that Gig Workers Rising and Mobile Workers Alliance do not represent all drivers. Lyft has shared thousands of messages it says drivers have sent to legislators demanding they protect their flexibility. However, as driver and protest organizer Annette Rivero previously told TechCrunch’s Greg Epstein, “AB5 doesn’t take away anybody’s flexibility, it’s the companies that take away the flexibility. Because I know that that’s something that everyone’s stuck on right now, and it’s a lie. There’s no truth to it.”