The global smart speaker market grew 55.4% in the second quarter to reach 26.1 million shipments, according to a new report from Canalys. Amazon continued to lead the race, accounting for 6.6 million units shipped in the quarter. Google, however, fell to the third spot as China’s Baidu surged ahead. Baidu in Q2 grew a sizable 3,700% to reach 4.5 million units, overtaking Google’s 4.3 million units shipped.

China’s market overall doubled its quarterly shipments to 12.6 million units, or more than twice the U.S.’s 6.1 million total. The latter represents a slight (2.4%) decline since the prior quarter.

Baidu’s growth in the quarter was attributed to aggressive marketing and go-to-market campaigns. It was particularly successful in terms of smart displays, which accounted for 45% of the products it shipped.

Meanwhile, Google was challenged by the Nest rebranding in Q2, the analyst firm said.

The report also suggested that Google should introduce a revamped smart speaker portfolio to rekindle consumer interest. The Google Home device hasn’t been updated since launch — still sporting the air freshener-style looks it had back in 2016. And the Google Home mini hasn’t received much more than a color change.

Instead, Google’s attention as of late has been on making it easier for device manufacturers to integrate with Google Assistant technology, in addition to its increased focus on smart displays.

Amazon, by comparison, has updated its Echo line of speakers several times while expanding Alexa to devices with screens like the Echo Spot and Show, and to those without like the Echo Plus, Echo Dot, Echo Auto and others — even clocks and microwaves — as sort of public experiments in voice computing. 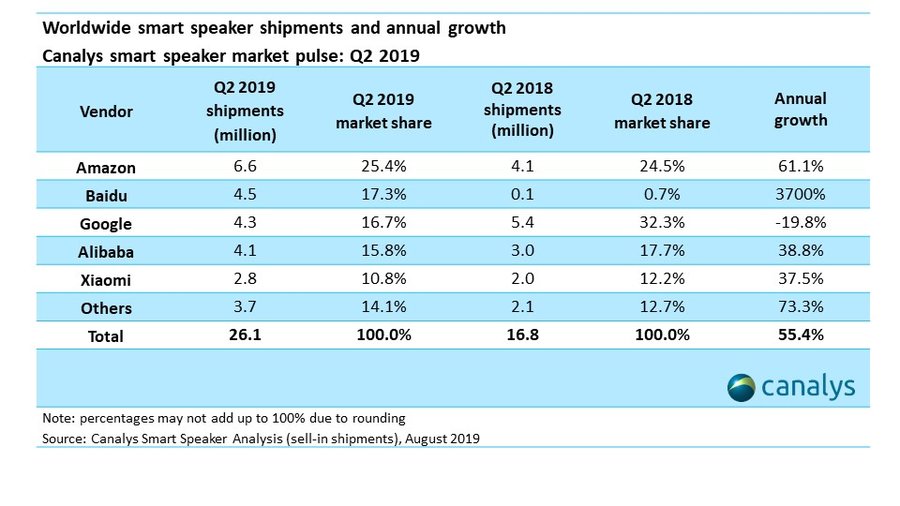 Beyond the top 3 — Amazon, Baidu and now No. 3 Google — the remaining top five included Alibaba and Xiaomi, with 4.1 million and 2.8 million units shipped in Q2, respectively.

The rest of the market, which would also include Apple’s HomePod, totaled 3.7 million units.