Sphero and littleBits have long been kindred spirits in the world of entertaining STEM toys, and soon they’ll be one and the same. Sphero this morning announced plans to buy the New York-based electronic building block company.

Founded in 2010 and 2011 respectively, Sphero (nee Orbotix) and littleBits took separate approaches, but ultimately ended up in similar spaces. Sphero first brought to life a smartphone-controlled 3D-printed ball that debuted at CES in 2011. That same year, Ayah Bdeir’s electronics kit side project became a serious business under the littleBits banner.

Both companies were alumni of Disney’s accelerator. Sphero leveraged that connection in the breakout Star Wars: The Force Awakens toy, a remote control BB-8. Ultimately, however, it flew too close to the sun with its licensed products, creating R2-D2, Lightning McQueen and talking Spider-Man toys. Early last year, the Colorado-based company ended the Disney deal, laid off dozens and announced that it was moving full time into educational toys.

After several of its own Marvel and Star Wars licensing deals under the Disney IP banner, littleBits faced similar difficulties earlier this year. In a statement to TechCrunch, the site noted that it, too, would be experiencing layoffs as it shifted its focus to K-12. “As you can imagine, the education market’s needs are vastly different than that of retail,” the company said at the time. Given this, we had to re-shape our internal structure, which ultimately led to a reduction in staff.”

Per Crunchbase, littleBits and Sphero have raised $62.3 million and $120.3 million respectively. LittleBits notably made its own acquisition almost exactly a year ago, bringing DIY.org under its banner to add a subscription-based education element to the company’s offerings. Two months prior, Sphero purchased fellow Colorado startup Specdrums, and has since begun to offer the company’s music educational products under its banner. 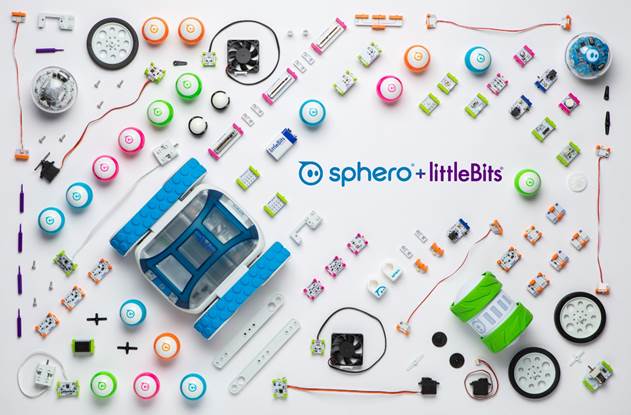 “We’re thrilled to bring littleBits into the fold here at Sphero,” CEO Paul Berberian told TechCrunch ahead of the acquisition. “Teachers need proven solutions that enhance learning for their students, and kids want technology that allows them to have epic experiences. Now, Sphero is better poised to introduce the best coding tools and hands-on STEAM tools like littleBits to even more classrooms around the world.”

The deal will help Sphero expand its office footprint into New York. Bdeir, however, will be moving on to other projects after nearly a decade at the helm of littleBits.

“When I studied engineering, it was top down, test-based,” she said in a statement offered to the press. “I hated it and wanted to quit every semester. Then I got exposed to the pedagogy of learning through play and my life changed; no one could peel me away from learning, inventing, creating. Together, littleBits and Sphero are now bringing this experience to kids everywhere.”

No word on how many littleBits employees will remain under the Sphero banner, though the aforementioned layoffs have certainly decreased the likelihood of redundancy between the two companies. With littleBits under its wing, Sphero now holds 140 patents in the fields of robotics, electronics, software and IOT. It remains to be seen how or if the lines will work together, or whether they’ll remain independent under the Sphero banner much as Specdrums has thus far.

Between the two brands, however, there’s some solid classroom outreach and goodwill here. And both despite and because of its own struggles, Sphero makes sense as a home for the company. Both have experienced solid growth into beloved brands in a similar time frame, even while getting ground through the sometimes unforgiving startup grind. Hardware is hard, and both Sphero and littleBits have the war wounds to prove it.

The deal bodes well for the companies in terms of positioning. Sphero has made some serious headway into schools (a notoriously difficult market to crack) and littleBits has been delivering a good and innovative product for a number of years that would fit well alongside it in a STEM curriculum. The combination could prove a solid one-two punch.