Oh hey, y’all, it’s Friday! It’s August! Which means it’s a great day for Facebook to drop a little news it would prefer you don’t notice. News that you won’t find a link to on the homepage of Facebook’s Newsroom — which is replete with colorfully illustrated items it does want you to read (like the puffed up claim that “Now You Can See and Control the Data That Apps and Websites Share With Facebook”).

The blog post Facebook would really prefer you didn’t notice is tucked away in a News sub-section of this website — where it’s been confusingly entitled: Document Holds the Potential for Confusion. And has an unenticing grey image of a document icon to further put you off — just in case you happened to stumble on it after all. It’s almost as if Facebook is saying “definitely don’t click here“… 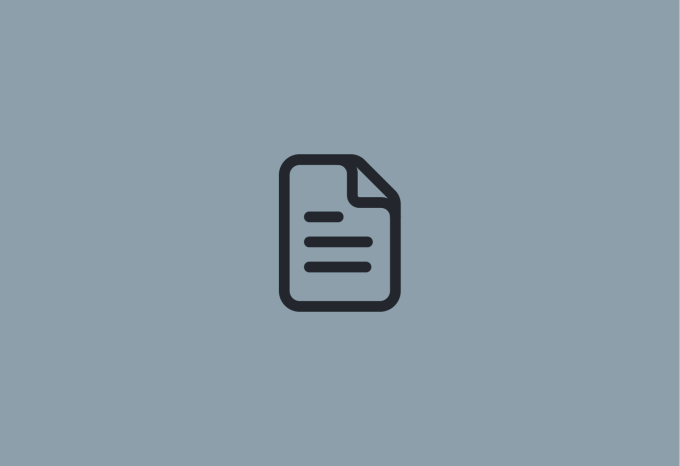 So what is Facebook trying to bury in the horse latitudes of summer?

An internal email chain, starting September 2015, which shows a glimpse of what Facebook’s own staff knew about the activity of Cambridge Analytica prior to The Guardian’s December 2015 scoop — when the newspaper broke the story that the controversial (and now defunct) data analytics firm, then working for Ted Cruz’s presidential campaign, had harvested data on millions of Facebook users without their knowledge and/or consent, and was using psychological insights gleaned from the data to target voters.

Facebook founder Mark Zuckerberg’s official timeline of events about what he knew when vis-à-vis the Cambridge Analytica story has always been that his knowledge of the matter dates to December 2015 — when The Guardian published its story.

This chimes with previous (more partial) releases of internal correspondence pertaining to Cambridge Analytica  — which have also come out as a result of legal actions (and which we’ve reported on previously here and here).

If you click to download the latest release, which Facebook suggests it “agreed” with the District of Columbia Attorney General to “jointly make public,” you’ll find a redacted thread of emails in which Facebook staffers raise a number of platform policy violation concerns related to the “political partner space,” writing September 29, 2015, that “many companies seem to be on the edge- possibly over.”

Cambridge Analytica is first identified by name — when it’s described by a Facebook employee as “a sketchy (to say the least) data modelling company that has penetrated our market deeply” — on September 22, 2015, per this email thread. It is one of many companies the staffer writes are suspected of scraping user data — but is also described as “the largest and most aggressive on the conservative side.” 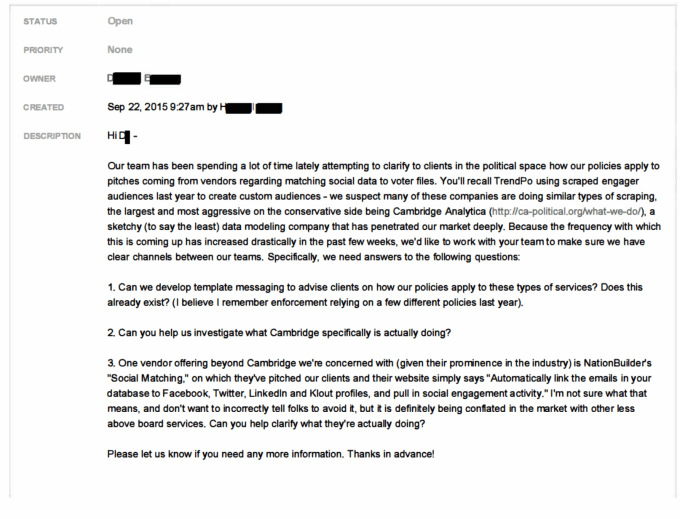 On September 30, 2015, a Facebook staffer responds to this, asking for App IDs and app names for the apps engaging in scraping user data — before writing: “My hunch is that these apps’ data-scraping is likely non-compliant.”

“It would be very difficult to engage in data-scraping activity as you described while still being compliant with FPPs [Facebook Platform Policies],” this person adds.

Cambridge Analytica gets another direct mention (“the Cambridge app”) on the same day. A different Facebook staffer then chips in with a view that “it’s very likely these companies are not in violation of any of our terms” — before asking for “concrete examples” and warning against calling them to ask questions unless “red flags” have been confirmed.

On October 13, a Facebook employee chips back into the thread with the view that “there are likely a few data policy violations here.”

On December 11 another Facebook staffer writes to ask for an expedited review of Cambridge Analytica — saying it’s “unfortunately… now a PR issue,” i.e. as a result of The Guardian publishing its article.

The same day a Facebook employee emails to say Cambridge Analytica “is hi pri at this point,” adding: “We need to sort this out ASAP” — a month and a half after the initial concern was raised.

Also on December 11 a staffer writes that they had not heard of GSR, the Cambridge-based developer CA hired to extract Facebook user data, before The Guardian article named it. But other Facebook staffers chip in to reveal personal knowledge of the psychographic profiling techniques deployed by Cambridge Analytica and GSR’s Dr Aleksandr Kogan, with one writing that Kogan was their post-doc supervisor at Cambridge University.

Another says they are friends with Michal Kosinski, the lead author of a personality modeling paper that underpins the technique used by CA to try to manipulate voters — which they described as “solid science.”

A different staffer also flags the possibility that Facebook has worked with Kogan — ironically enough “on research on the Protect & Care team” — citing the “Wait, What” thread and another email, neither of which appear to have been released by Facebook in this “Exhibit 1” bundle.

So we can only speculate on whether Facebook’s decision — around September 2015 — to hire Kogan’s GSR co-founder, Joseph Chancellor, appears as a discussion item in the “Wait, What” thread…

Putting its own spin on the release of these internal emails in a blog post, Facebook sticks to its prior line that “unconfirmed reports of scraping” and “policy violations by Aleksandr Kogan” are two separate issues, writing:

We believe this document has the potential to confuse two different events surrounding our knowledge of Cambridge Analytica. There is no substantively new information in this document and the issues have been previously reported. As we have said many times, including last week to a British parliamentary committee, these are two distinct issues. One involved unconfirmed reports of scraping — accessing or collecting public data from our products using automated means — and the other involved policy violations by Aleksandr Kogan, an app developer who sold user data to Cambridge Analytica. This document proves the issues are separate; conflating them has the potential to mislead people.

It has previously also referred to the internal concerns raised about CA as “rumors.”

“Facebook was not aware that Kogan sold data to Cambridge Analytica until December 2015. That is a fact that we have testified to under oath, that we have described to our core regulators, and that we stand by today,” it adds now.

It also claims that after an engineer responded to concerns that CA was scraping data and looked into it they were not able to find any such evidence. “Even if such a report had been confirmed, such incidents would not naturally indicate the scale of the misconduct that Kogan had engaged in,” Facebook adds.

The company has sought to dismiss the privacy litigation brought against it by the District of Columbia which is related to the Cambridge Analytica scandal — but has been unsuccessful in derailing the case thus far.

The DC complaint alleges that Facebook allowed third-party developers to access consumers’ personal data, including information on their online behavior, in order to offer apps on its platform, and that it failed to effectively oversee and enforce its platform policies by not taking reasonable steps to protect consumer data and privacy. It also alleges Facebook failed to inform users of the CA breach.

Facebook has also failed to block another similar lawsuit that’s been filed in Washington, DC by Attorney General Karl Racine — which has alleged lax oversight and misleading privacy standards.