Walmart’s relationship with Instacart deepened today with an expansion of their partnership across Canada for grocery delivery. Walmart Canada had previously run a 17-store pilot program with Instacart, starting last September, in both the Greater Toronto area and Winnipeg. With the expansion, Walmart Canada will offer same-day grocery delivery from nearly 200 Walmart stores nationwide.

Canadian Walmart shoppers can now shop online via Instacart’s website or mobile app, select their city and store, then add items to a grocery cart, check out and choose their delivery window. The delivery can arrive in as fast as one hour, or it can be scheduled as much as five days in advance. 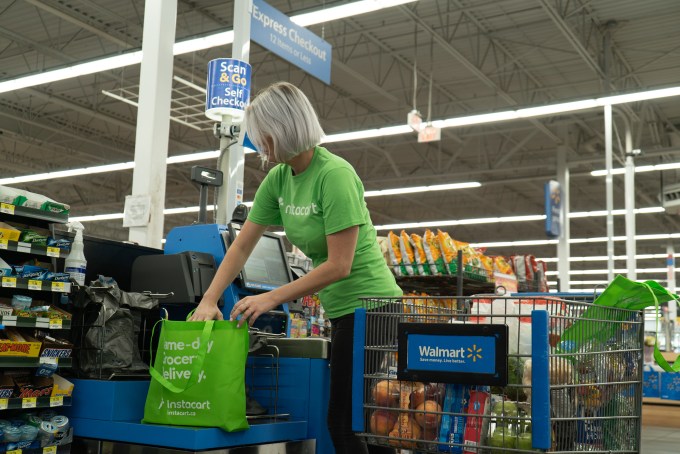 Walmart in the U.S. also offers an online grocery service, but has chosen to work with other delivery providers, including Point Pickup, Skipcart, AxleHire, Roadie and Postmates, after ending relationships with Uber, Lyft and Deliv. According to reports, Walmart didn’t want to work with Instacart in the U.S. because it only wants to use the provider for last-mile deliveries — and Instacart wanted to list Walmart inventory in its app.

In Canada, however, that arrangement seems to be working out.

It’s not the only option for Walmart’s online grocery in Canada, though.

“Canadian families are busy. By introducing more online shopping options at Walmart, we’re helping make life easier and more convenient for them,” said Lee Tappenden, president and CEO of Walmart Canada, in a statement released today. “Expanding our relationship with Instacart provides our customers with even more time-saving ways to shop at Walmart in their community.”

To kick off the deal, the code WMTCOAST2COAST can be used at checkout for $10 off a first-time customer’s order of $35 or more.