New numbers out of Canalys show strong continued growth for the North America wearables market for Q2. The market hit $2 billion value for the quarter, according to the firm, marking a 38% year over year growth.

It’s not exactly earth-shattering, but it’s steady for a category that felt almost dead in the water a year or two back. Growth for the quarter was led by Apple and Samsung, which marked 32% and 121% growth, coming in at first and third place, respectively — at 2.2 million and 400,000 units.

Fitbit, meanwhile, retained its No. 2 position. The company showed a modest 18% growth, owing the slowdown to fewer smartwatches (versus fitness bands) shipped. That tracks with the company’s disappointing quarterly results as the new Versa Lite failed to hit the mark. The move marks a misstep for the Versa brand, which has otherwise contributed well to Fitbit’s bounce back. 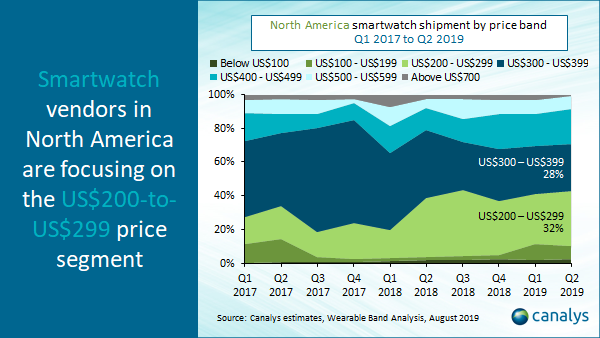 Interestingly, while North America is the No. 2 wearables market in terms of units shipped, it continues to be the most valuable. That’s likely due to higher unit prices, with the Apple Watch leading the pack, versus Xiaomi’s super-cheap fitness bands, which have a much stronger foothold in their native China.