Dave McCool, senior product manager at Procore, says that for years architects and engineers have been working with 3D models of complex buildings on desktop computers and laptops, but these models never made it into the hands of the tradespeople actually working on the building. This forced them to make trips to the job site office to see the big picture whenever they ran into issues, a process that was inefficient and costly.

Procore has created a 3D model that corresponds to a virtual version of the 2D floor plan and runs on an iOS device. Touching a space on the floor plan opens a corresponding spot in the 3D model. What’s more, Procore has created a video game-like experience, so that contractors can use a virtual joystick to move around a 3D representation of the building, or they can use gestures to move around the rendering. 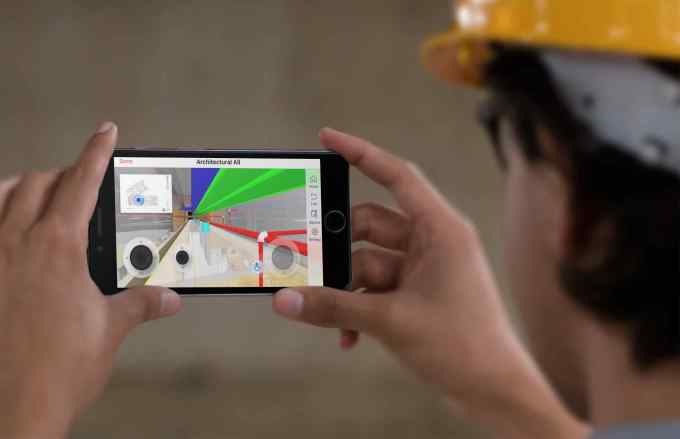 The app has been designed so that it can run on an iPhone 7, but for optimal performance, Procore recommends using an iPad Pro. The software takes advantage of Apple Metal, which gives developers “near direct” access to the GPU running on these devices. This ability to tap into GPU power speeds up performance and allows this level of sophisticated rendering quickly on iOS devices.

McCool says that this enables tradespeople to find the particular area on the drawing where their part of the project needs to go much more easily and intuitively, whether it’s wiring, duct work or plumbing. As he pointed out, it can get crowded in the space above a ceiling or inside a utility room, and the various teams need to work together to make sure they are putting their parts in the correct spot. Working with this tool helps make that placement crystal clear.

It’s essentially been designed to gamify the experience in order to help tradespeople who aren’t necessarily technically savvy operate the tool themselves and find their way around a drawing in 3D, while reducing the number of trips to the office to have a discussion with the architects or engineers to resolve issues.

This is the latest tool from a company that has been producing construction software since 2002. As a company spokesperson said, early on the company founder had to wire routers on the site to allow workers to use the earliest versions. Today, it offers a range of construction software to track financials, project, labor and safety management information.

Procore BIM will be available starting next month.