Sleeper is looking to take on fantasy league apps from major players like ESPN and has amassed venture funding from Silicon Valley investors to take them down.

The Bay Area startup is aiming to treat a fantasy football league more like a social platform than a loose jumble of league mechanics, distinguishing itself as a simple and free, ad-free option.

Sleeper has done limited press as it has been ramping up its app over the past two seasons, but the team has been courting the interest of investors to scale the product, raising more than $7 million from VCs to date. The company closed a $5.3 million Series A late last year led by General Catalyst. In early 2017, the startup also closed a $2 million seed led by Birchmere Ventures with participation from Uber co-founder Garrett Camp’s startup studio, Expa.

There isn’t much in terms of monetization options at the moment. CEO Nan Wang tells TechCrunch that the focus right now is “amassing a large base of users and making it the stickiest and highest engagement product in the category.”

Wang says the app’s users spend 50 minutes per day on average during the season, numbers he calls “Instagram-like.” The main contributor to that number seems to be that chat is always a swipe away and that all of the actions that are happening during the season show up inside chats to encourage engagement.

This unifies the experience for users, many of whom have had to piecemeal their experience by using a WhatsApp or GroupMe group in addition to the other fantasy league apps that they’ve been using. Sleeper’s more differentiated UI seems to be largely popular among early vocal users as well as the up-to-the-minute notifications that deliver league updates. 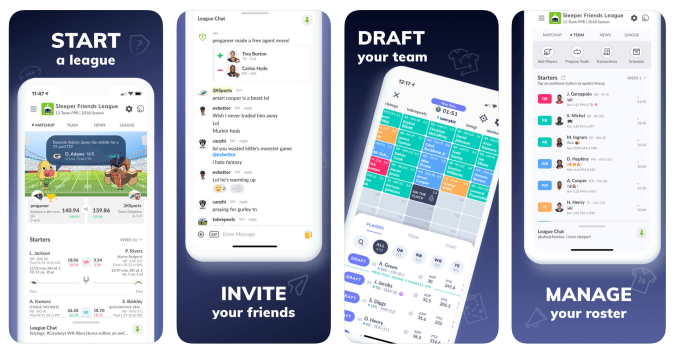 Poaching users from other platforms is definitely a priority, but Wang says the team has really been looking at how to nab users who have stayed away from the convoluted confusion of fantasy leagues as well. Taking on the leading apps from ESPN, Yahoo and NFL can be daunting; another stress for the younger startup is just how tight the user acquisition window is, though things compound quickly if you can create one loyal user that brings their entire league to the platform.

“The user acquisition window for fantasy football leagues is strongest from the second week of August until the first week of September. Historically, we’ve seen that about 70% of users create their leagues in that three-week window,” Wang tells me.

The funding has been used to build out its team, which is still just 10 full-time employees, as well as expand their ambitions beyond fantasy football alone into other sports, including basketball and soccer.