Walmart is dominating the U.S. online grocery market, according to new research out this week from the analysts at Second Measure. The nationwide retailer today offers grocery pickup and delivery in nearly every U.S. state, and had 62% more customers in June than its next nearest rival. And no, in this case, that rival is not Amazon — it’s Instacart.

Like Walmart, Instacart also operates across the U.S., offering both pickup and delivery services.

The same is true for Amazon Prime Now and Peapod, while other competitors are limited to delivery only — like Target-owned Shipt and FreshDirect. Meanwhile, AmazonFresh offers delivery, plus pickup in Seattle. 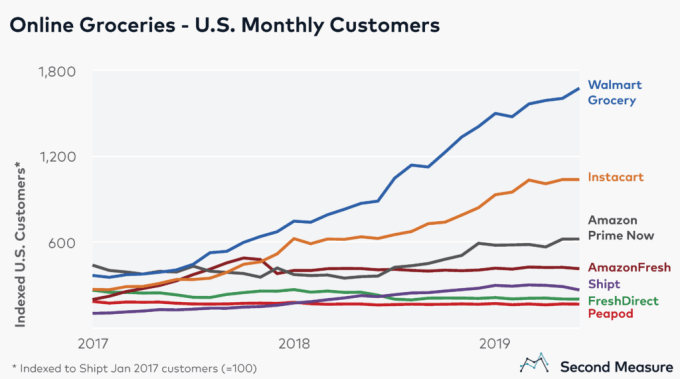 While Walmart has been steadily capitalizing on its existing brick-and-mortar footprint and proximity to its customer base, Amazon’s strategy in the online grocery space appears to be one of confusion. The retailer is competing against itself by offering two services — Amazon Prime Now and AmazonFresh. The latter, an older service operated before Amazon’s Whole Foods acquisition, is actually one of the few online grocery businesses in decline during this time period, the report discovered. Founded more than a decade ago, AmazonFresh has only grown to 15 U.S. cities and shut down in some zips while opening in others.

This June, AmazonFresh sales were down by 19% year-over-year — the worst sales change in the new research report, the analysts noted.

[Amazon disputes the report’s findings as “factually inaccurate,” with a spokesperson saying that “AmazonFresh sales have increased.”]

Prime Now, on the other hand, is booming. Year-over-year sales nearly tripled in June. This is not only due to Whole Foods, whose assortment was added in February 2018, and is now a big driver for orders. Consumers also likely opt for Prime Now because it’s offered as part of their annual Amazon Prime subscription, while AmazonFresh is an additional $14.99 per month.

Prime Now has also been expanding to more U.S. markets, and is on track to reach even more as Amazon invests in building additional Whole Foods locations and possibly other non-Whole Foods stores.

The new research also notes that Target’s Shipt could be doing better than its estimates indicate.

Since Shipt’s acquisition by Target in December 2017, Shipt’s customer base has grown by 69%. While a membership is required to shop the various grocers and stores offered in the app, Target deliveries don’t require a subscription.

In June, Target launched a dedicated online grocery shopping site on Target.com, powered by Shipt. Second Measure says it cannot distinguish any grocery orders that originate in the Target app or website, so Shipt’s customer counts may be higher than it’s able to determine.

Another question the report answers is to what extent Instacart has been impacted by the loss of Whole Foods.

Following its 2017 acquisition by Amazon, Whole Foods ended its relationship with its first and older delivery partner last year. The company recently claimed, however, that Whole Foods was only 5% of sales. Second Measure seems to back this up, finding that Instacart had 23% more customers in June than it had when the partnership ended in December 2018. 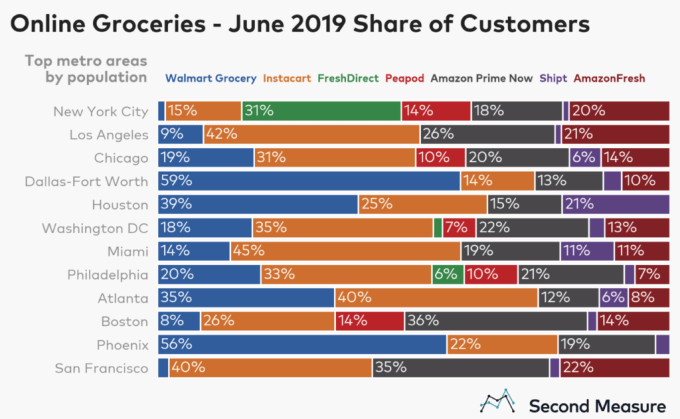 Meanwhile, one exception to Walmart’s dominance in online grocery is in the unique urban metro that is New York. Here, locally headquartered FreshDirect has 31% of the NYC customer base for online grocery. (Note that Second Measure counts customers at each company they use — so customers who shop from more than one are counted twice.) Walmart only has 2% of the NYC metro, by comparison.

It also has small percentages in several other big metros, including San Francisco (2%), Boston (8%) and Los Angeles (9%). Walmart is huge in both Dallas and Phoenix, on the other hand — but both have been early markets for online grocery. 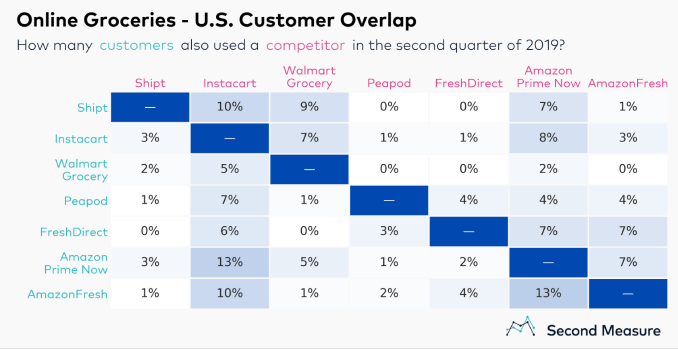 The report additionally found there’s strong loyalty among online grocery shoppers. Unlike with meal delivery services, no grocery delivery company shared more than 9% of another company’s customer base in the second quarter of 2019.

The market still has room to grow, as well. Only 12% of U.S. consumers have tried at least one of the grocery services the report analyzed, up from 9% in June 2018.

Second Measure’s data comes from a panel is made up of millions of anonymized U.S. consumers, and it analyzes billions of debit and credit card purchases to form its estimates. The company doesn’t scale up its samples to forecast the true numbers of U.S. customers or total sales dollars.