Aaron Rasmussen, co-founder and former creative director of MasterClass, has a new startup called Outlier.org. Like MasterClass, Outlier is bringing education online, but with a key difference — these are college classes offering real college credit.

The startup is launching a pilot version of its first two courses, Calculus I and Introduction to Psychology, for the coming fall semester. Each course is available for $400. (That covers all costs, including textbooks.)

Despite the .org name and address, Rasmussen said Outlier is very much a for-profit company, but he added, “We do want to make it clear that our goal is social impact. I believe in market solutions to problems. Coming up with a market solution to education, rather just relying on people’s charity, is far more durable.”

The problem in question is the cost of higher education. Rasmussen said that each year, 1 million students take a college-level Calculus I course in the United States, at an average cost of $2,500. And then 40% of them fail.

“That means we’re wasting $1 billion per year,” he said — and that’s just on a single class. 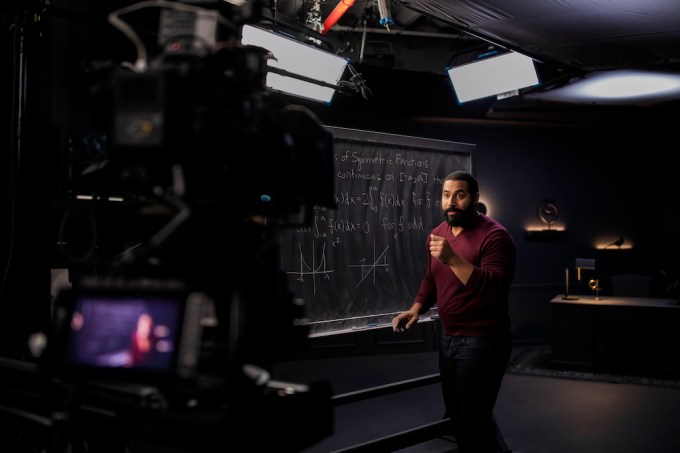 Rasmussen is hardly the first to point out the problem, which is one of the main factors in the growing push for online learning. But he also argued that there’s not “a great online college” yet, due to four main factors.

First, there’s the issue of prestige, which he’s trying to solve by partnering with the University of Pittsburgh — students who pass Outlier’s classes will receive transferable credits from the university (though you’ll want to check whether specific institutions will accept those credits).

Next, there’s the actual content and learning environment. Rather than simply filming classroom lectures (“which can be pretty tedious to watch”) and posting PDFs of the homework and tests, Outlier is shooting classes specifically for online presentation, with instructors speaking directly to the camera, and it’s also dynamically generating the problem sets and offering one-on-one tutoring.

In addition, students can choose from different instructors (the teachers for Calculus I, for example, include Hannah Fry of University College London, Tim Chartier of Davidson College and John Urschel of MIT), or even switch between them mid-semester. And there are smaller touches, like the fact that the website was created in dark mode, so Rasmussen said it doesn’t feel like you’re “staring into a lightbulb” as you’re learning.

Third, there’s the element of social interaction, which is why Outlier will break classes up into smaller study groups of four to five students who can connect over video chat. When I suggested that this may be the hardest part of the college experience to replicate online, Rasmussen said the startup will be trying different approaches (which he wasn’t ready to specify), but he added, “Part of our approach to this is trying to stay nimble.”

Lastly, there’s the cost. Again, Outlier is charging an introductory price of $400, and while it sounds like the exact number could change, Rasmussen is committed to keeping the price tag at around this level.

He also said that the company is “flipping the philosophy of education” by offering refunds to any student who doesn’t pass. That means Outlier has an incentive to ensure each student’s success — but does it also create an incentive to simply let everyone pass?

“The real stopgap there is that we are overseen by the accrediting partner university,” Rasmussen said. “They literally have checked our midterms and finals and things like that … That puts a bit of a fail-safe there.”

While Outlier is only offering two pilot courses this fall, the obvious goal is to add more classes over time. Students might take these classes during their summer break, or as a supplement to their in-person classes, or as a way to get college credit when life circumstances make it difficult for them to attend a residential university.

Even as it grows, Rasmussen suggested that Outlier will remain focused on “the first 25 college-level courses,” rather than recreating an entire college curriculum.

“As far as the next couple years of college after that, there’s just a lot of benefit to going to a residential college for those upper-level courses,” he said. “We’re really focused on these first couple years, [where we can] hack down a bunch of the student debt.”