Starting a new venture fund is extremely challenging. In addition to just the monstrous task of fundraising — which can take as long as two years in some cases to lock down all the limited partners (LPs) on the same terms — the economics for a debut fund are often just terrible.

Take a sort of starter $20 million seed fund with two general partners using the industry’s oft-quoted (but not really all that common) “2 & 20” compensation model. This hypothetical fund rakes in $400,000 a year in management fees (2% of $20 million) to cover all costs of the fund: office rent, staff costs, legal fees, tax preparation and accounting services in addition to the travel and entertainment costs of trying to woo founders. Whatever remains is split between those two GPs as their salaries. It’s not uncommon for new partners to make $50,000 — or even nothing — in the early years of a new firm, which is one reason the industry is stacked with ultra-wealthy individuals.

For young financiers looking to break into the industry, the situation is bleak, which is one reason why fund managers have gotten very creative around how to structure their management fees in order to bootstrap a venture firm in its early years.

These sorts of fund details are often kept tight-lipped, but thanks to the Mike Rothenberg case, we now actually have real data from a new firm and how it structured its fees for asset growth. From discussions with others in the industry, the models that Rothenberg Ventures used are reasonably available for investment managers looking to build new franchises.

All data for this analysis comes from Exhibit A — the Expert Report of Gerald T. Fujimoto, a forensic accountant who evaluated Rothenberg Ventures as part of the SEC’s lawsuit against Mike Rothenberg (Case No. 3:18-cv-05080). The exhibit was filed July 29, 2019. TechCrunch did not attempt to verify the work of the forensic accountant, since this analysis makes no claims about Rothenberg Ventures, but uses the data for illustrating how funds are structured in today’s work.

Below is a recreation of the fund structures as reported in the SEC’s case against Mike Rothenberg. Rothenberg Ventures raised a series of four venture funds with fee structures that vary widely from the traditional 2 & 20 model, which assumes a 2% annual management fee for each of the 10 years of a fund’s life (further extensions beyond 10 years don’t usually offer significant fees, although every fund is structured differently). That equation means that management fees generally represent 20% of a fund’s committed capital. 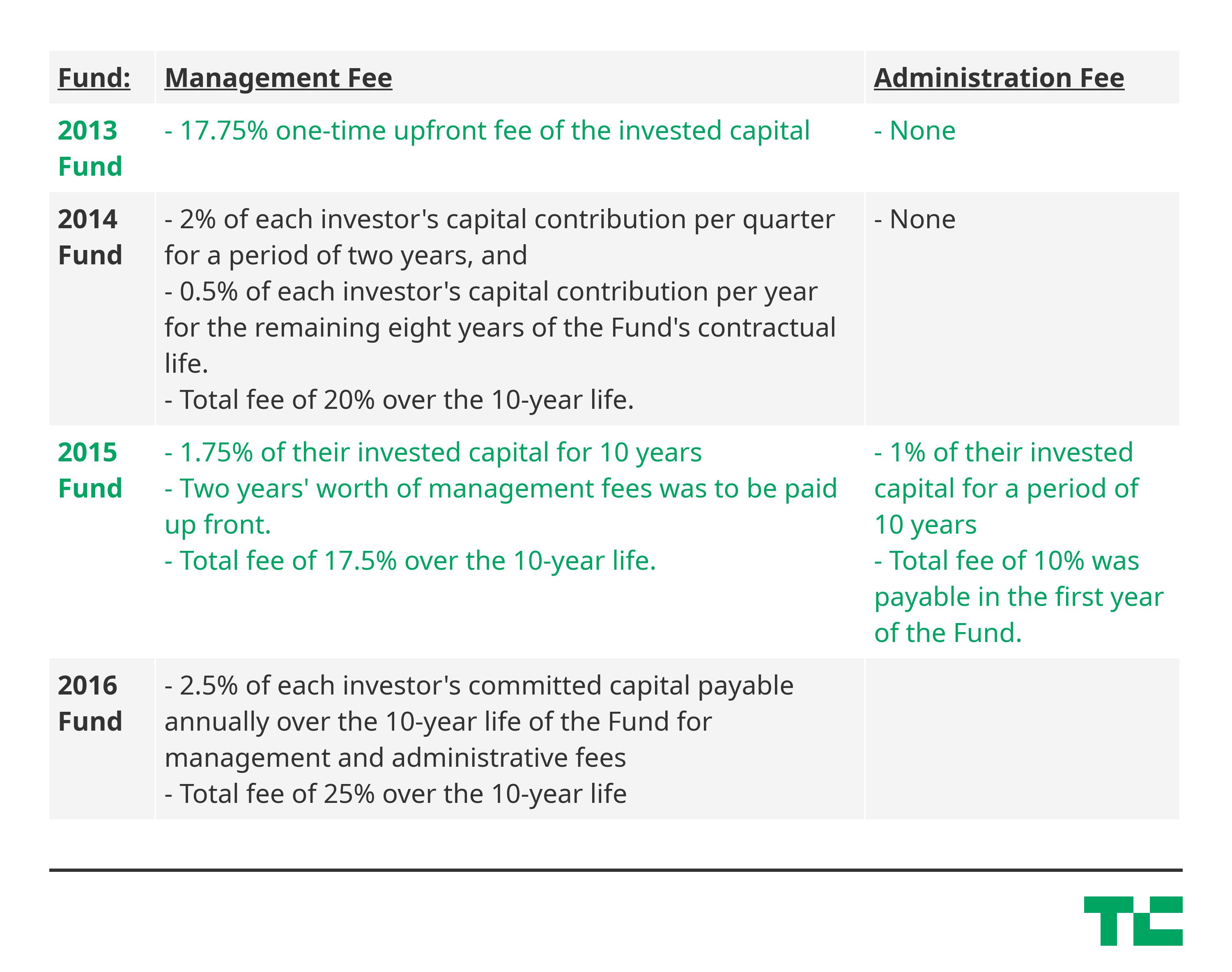 For the firm’s debut fund, Rothenberg entirely eliminated the slow and orderly parceling out of fees in lieu of a one-time 17.75% fee upon the closing of the $2.6 million fund. That meant an immediate infusion of about $470,000 into the firm, but no continual fees thereafter. This sort of heavy upfront payment is not uncommon in the industry, although it is less common to have literally the sum total of management fees for a 10-year fund paid out entirely on its first day.

From an LP perspective, this sort of fee structure indicates that the firm almost certainly would have had to raise additional funds almost as soon as the first one closed, since the fees of future venture funds would be needed to cover the management costs of the first fund in its later years.

In short: This is what a bootstrap looks like in venture capital.

Now, continuing to the second fund (2014), we see a bit more of a traditional parceling out of fees over the course of the fund, although still with a heavy upfront skew. The fund pays out the typical 20% of invested capital in total, but 80% of that amount was paid out in the first two years. Again, the implicit assumption with this sort of bootstrap is that the firm will succeed and raise additional capital (and therefore management fees) to keep the operation going.

We then see the same pattern in the 2015 fund, with fees having a normal structure, but then with more aggressive upfront payouts required. So while the fund had a flat payout every year for its management fee, two years of that fee was to be paid out immediately upon close. Similarly, the administrative fee was flat — but paid out entirely in the first year of the firm’s operation.

Finally, the fourth fund (2016) returns to a more typical, flat fee structure at 2.5% per year with no provisions for upfront payment.

Why does this all matter? Let’s go through a back-of-the-napkin exercise of what these numbers really meant for the operations of the fund: 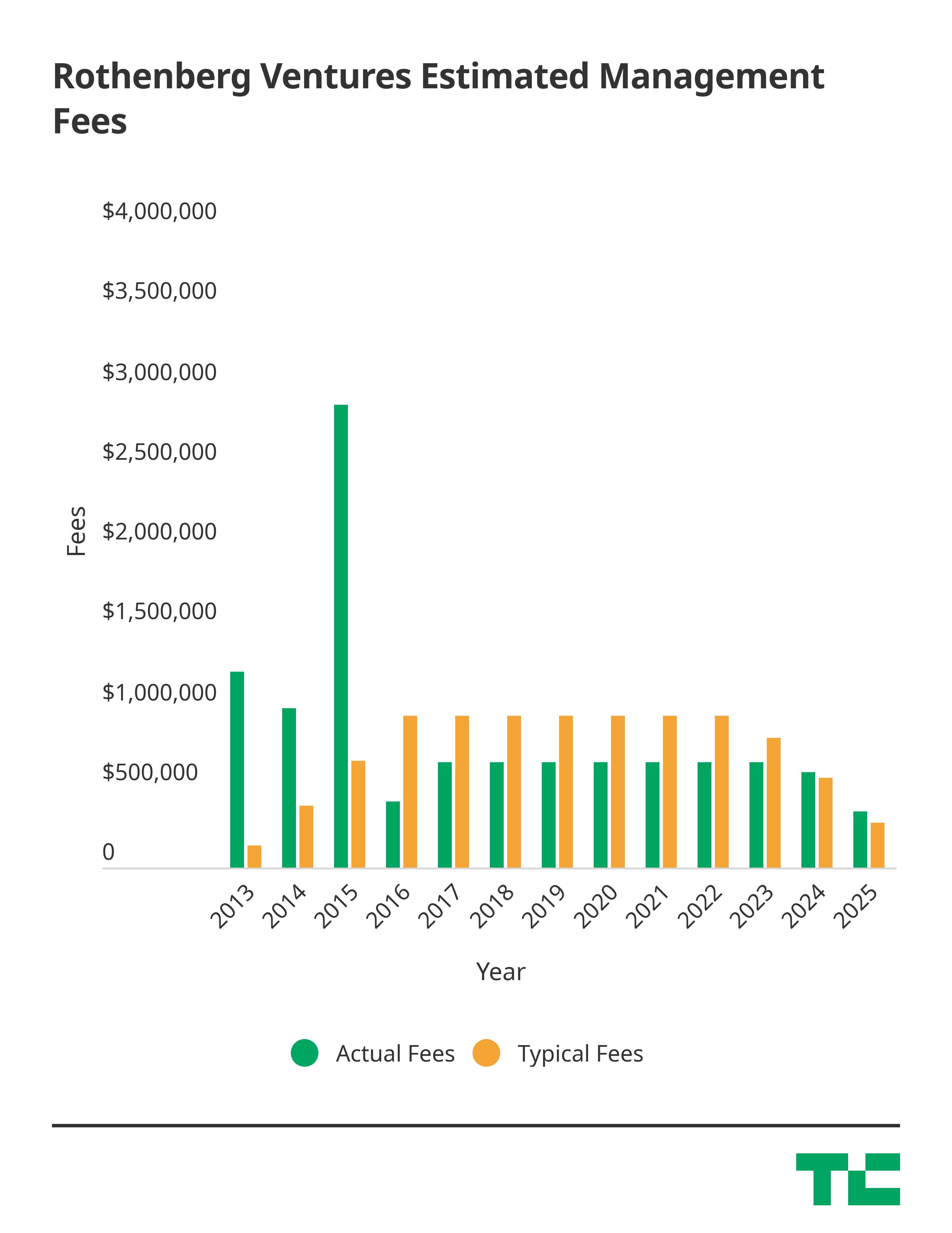 Data from SEC Case, Exhibit A

As we can clearly see here, all of those management fees upfront really did give the firm far more resources in the early years than it might have otherwise had. Over the first three years, the firm had access to roughly $5.1 million in fees, whereas with a traditional 2% annual structure, the firm would have had access to just $1.2 million. Of course, that bootstrap comes at a cost in the later years, when the firm would have more resources to manage the fund.

Nonetheless, those upfront payments helped the firm tremendously punch above its own weight. With its $1.2 million of fees in year one, it essentially had the resources of a $60 million fund — yet it had only raised $6.7 million. It similarly punched above its weight the next few years as it raised new funds with aggressive upfront fee schedules as well.

Of course, there’s a heavy burden with this approach — it’s a bet-it-all strategy that leaves little room for error (such as a series of failed investments) that might make future fundraising hard. It’s a rocket with no ejection seat, but when it works, it can compress the time to venture fund leader dramatically — maybe even by as much as a decade.

The death of once high-flying VC funds

Ultimately, VCs like to bet, and they certainly like to bet on themselves, which is why these sorts of cash-flow optimizations are prevalent for new firms. No one assumes that their firm is going to fail. Plus, these sorts of management fee structures are also among the few tools a non-wealthy individual can use to even get a new fund underway. For new fund managers and for others considering jumping into the VC industry, a nuanced understanding of the risks and opportunities of mortgaging future dollars for present spend is critical — not only for one’s integrity and stress levels, but hopefully to avoid those SEC investigators and forensic accountants, as well.