By-the-minute car rental service Car2go is raising its rates for short trips under the guise of variable pricing, the company announced to its users today. As we’ve seen with other variably priced services like delivery and ride hailing, in practice this means you never really know what it will cost but will have little choice but to pay.

In an email to users of its service, Car2go said that as a result of “constantly evaluating our product, packages, and pricing strategies” it had arrived at the new system, under which price will depend on time, location and day. The new cost structure takes effect next month.

For Car2go users, this will generally mean paying more. The company highlighted a new cheaper possible per-minute rate of 35 cents, significantly lower than the current $0.45 rate. But it’s easy to guess when that lower rate will be available: “times, locations and days” that no one is using the service. Meanwhile, it’s also possible to encounter a new higher per-minute rate of up to 49 cents when cars are in demand or in a high-use location.

Blocks of time from half an hour to four hours are all increasing in price: The current flat rates are now floor rates, with the possibility you’ll be paying as much as a third more than before. For example, a two-hour block currently costs $29; soon it will cost somewhere between $30 and $39. Again, you won’t know until you open the app to check it out, at which point you’re probably already committed.

Day-length packages are actually cheaper under the new system, but no longer include miles, so while a 24-hour pass used to be $79, now it’s $70 — but at 19 cents per mile, you’ll be in the red after less than 50 miles. And the price only goes up from there. Still, it’s conceivable you’ll pay less for a two or three-day rental if you’re not actually going anywhere distant, but just need a car for the weekend.

A newly instituted zone-based charge and refund system punishes drivers for leaving the city center and rewards those at the periphery for driving back toward heavy usage areas. There’s a $5 charge if you leave the central zone, and $5 refund — or the price of the trip, if less — if you bring a car in from the outer one. (Consult your local Car2go to see what the zones are in your city.)

Count the cards here and you can see the house always wins. If you’re going out, the full $5 fee always applies. If you’re coming in, it will be very difficult to nail that $5 ride — go under and Car2go is reimbursing less than the $5 (and thus comes out ahead), go over and you end up paying money anyway. It’s just one of those clever little traps businesses set up.

You can see the full changes in the chart below: 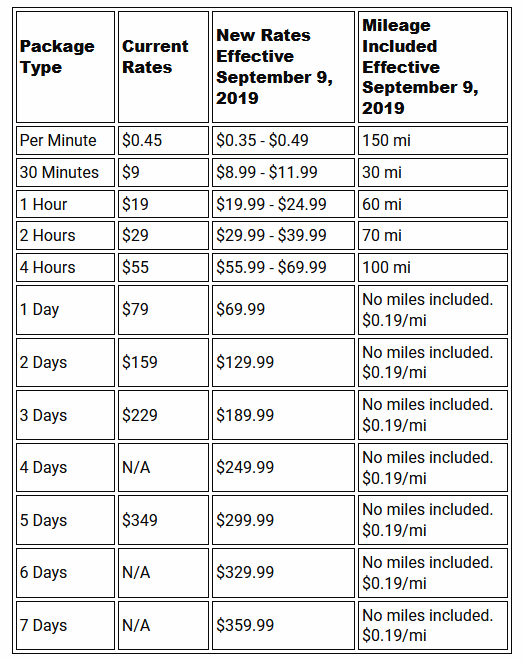 Oh, and your first 200 trips this calendar year have an additional $1 fee. You’re welcome!

In case you can’t tell, this is bad news for consumers, though it would be too much to expect that these prices would stay stable for years. But variable pricing is fundamentally anti-consumer because of a lack of transparency under which the companies controlling it can pull all kinds of shenanigans. Sadly, that makes it a great choice for the bottom line.

These unwelcome changes come six months after Car2go joined the BMW-Daimler joint venture Share Now, which has a variety of car-share services around the world it intends to unify under a single brand soon (it already killed ReachNow, rather abruptly). Apparently larger scale and reduced competition don’t actually lead to lower prices — unfortunate for their customers. But overall the floating car-share services are an important one. Just not as cheap as they used to be.