Apple Music launched its data dashboard for musicians more than a year ago. Today, the company is taking that product — Apple Music for Artists — out of beta, and adding some new features in the process.

For one thing, it’s no longer a web-only product, because Apple is releasing an iPhone app. On both web and iOS, Apple Music for Artists allows musicians and their teams to see how often a song has been played, how many listeners it’s reaching and how many times it’s been purchased.

There’s also an “insights” section designed to highlight noteworthy data at any given moment, like how the first week of a new song compares to the first weeks of previous songs, or when the popularity of a song is spiking, or if they’ve hit a big milestone like 1 million plays.

Apple also is introducing data from Shazam, the music-recognition app it acquired last year. The idea is to capture listener behavior that’s very different from seeking out an artist or a specific song — it’s more about a moment of spontaneous connection, when you hear a song and think, “Whoa, what’s this?” (This also provides a window to behavior beyond Apple Music listeners.) 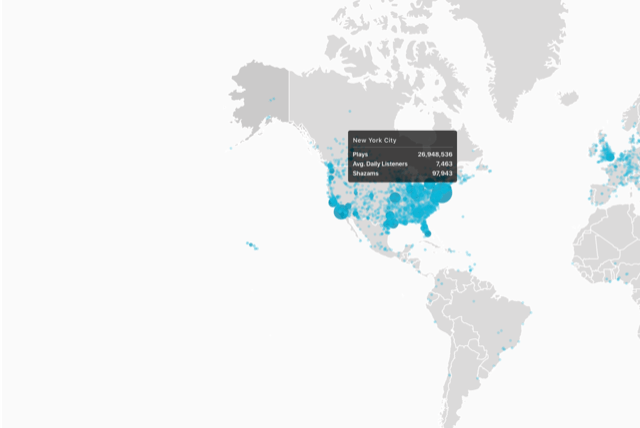 One of the goals is to give musicians the data they need to actually guide their decisions. For example, they might see that a song doesn’t have many plays compared to their big singles, but it’s doing surprisingly well on Shazam — so maybe it’s time to shift promotion.

And the data is also browsable by city, on a map. So if someone’s planning a tour, they can use this to data to choose which cities to visit, or to find the correct venue size in a given market.

Apple says all the data (including Shazam data) goes back to the launch of Apple Music in 2015. Any artist can claim their account for free.