When we go online to communicate, hang out or play, we’re typically logging on to platforms conceived of and built by men.

Mark Zuckerberg famously created Facebook in his Harvard dorm room. Evan Spiegel and his frat brother Bobby Murphy devised a plan for the ephemeral messaging app Snapchat while the pair were still students at Stanford. Working out of a co-working space, Kevin Systrom and Mike Krieger built Instagram and yes, they also went to Stanford.

Seldom have social tools created by women climbed the ladder to mainstream success. Instead, women and girls have battled the lion’s share of digital harassment on popular social platforms — most of which failed early-on to incorporate security features tailored to minority user’s needs — and struggled to find a protected corner of the internet.

Squad, an app that allows you to video chat and share your phone screen with a friend in real time, has tapped into a demographic clamoring for a safe space to gather online. Without any marketing, the startup has collected 450,000 registered users in eight months, 70% of which are teenage girls. So far this year, users have clocked in 1 million hours inside Squad calls. 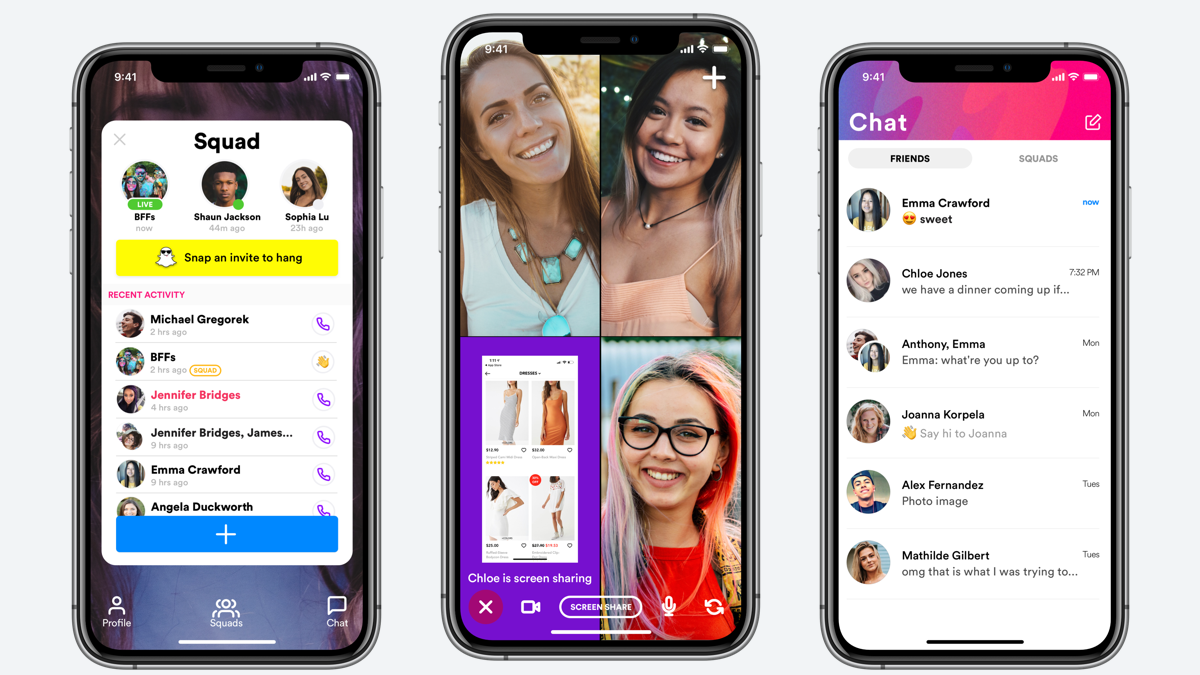 Squad, the social screen-sharing and group video chat app, has pulled together a $5 million investment led by First Round Capital

Learn from the best but get rid of the shit

A remote team of six people led by Crawford, who’s a graduate of Oregon State University, Squad’s compelling founding story and organic growth helped them close a $5 million seed round led by First Round Capital general partner Hayley Barna, the only female partner at the historically all-male early-stage investment fund known for being the first institutional check in Uber.

“We want to be a place where girls can come and hang out,” – Squad co-founder and CEO Esther Crawford.

Crawford describes Squad, which she’s built alongside her co-founder and chief technology officer Ethan Sutin, as the “anti-bro startup.” Not only because it’s led by a woman and boasts a cap table that’s 30% women and 30% people of color, but because she’s completely rewriting the consumer social startup playbook.

“We are trying to learn from the best in what they did but get rid of the shit,” Crawford said, referring to Snap, WhatsApp, Twitch and others. Twitch, a live-streaming platform for gamers, has become a social gathering place for Gen Z, she explains, but like many other communities on the internet, it’s failed its female users.

“Girls have been completely pushed off of Twitch,” she said. “The Twitch community didn’t want them there and they weren’t friendly to them. For boys, there are places you can go to consume content with other people, like Fortnite, but for girls there hasn’t been a place that’s really broken out. We want to be a place where girls can come and hang out.”

What Crawford and the small team at Squad have realized is that you don’t have to sacrifice growth for user safety and comfort. From the beginning, Squad has made sure users could easily block and report inappropriate behaviors and users, a feature that was an afterthought on many other social tools. They also made users unsearchable unless another user knows their exact username. By prioritizing the security of its primarily female audience, Squad is betting girls will continue coming back to the app and telling their friends about it.

“It’s possible to make girls feel safe and still have growth as a consumer product,” she said. “If people don’t feel safe on your app, they won’t stick around long-term.”

Squad quietly launched in January after pivoting away from building an information-sharing tool called Molly, which was backed with $1.5 million from BBG, Betaworks, CrunchFund and Halogen Ventures. Crawford’s now 14-year-old daughter unintentionally inspired the transition, when she proposed her mom create an app where she could peer into her best friends’ phones from afar.

Using Squad, people can browse memes, pore through DMs, plan a trip on Airbnb, peruse Tinder or a photo album with a friend via its video chat and screen-share features. As Crawford describes it, it’s all the stuff you don’t want to post to Snap or Instagram but want to show your best friends. An app that may seem frivolous or non-essential seems to have quickly become a space online where girls are opting to spend hours intimately engaged with their friends — without fear of stumbling into a troll.

“People can use this digital tech to hang out together instead of it being so performative,” Crawford said.

The downside of Squad’s screen-sharing capabilities is a user can view another user’s Facebook friend’s profile, even if, say, they themselves were blocked from viewing that content. Most apps are available for viewing through screen share aside from premium video streaming apps like Netflix or Amazon Prime Video, so it’s entirely possible someone could use Squad solely for the purpose of viewing social content they are otherwise barred from seeing. In response to this possibility, Crawford says they are considering alerting users when their Squad chat’s been screen-shotted. To avoid additional privacy issues, Squad users can’t record or save anything from their calls or replay what happened on Squad.

Like many early-stage startups, the company isn’t making any money yet because the app is free and without ads. As soon as next year, however, Squad plans to monetize the product with in-app purchasing, scraping another rule from the consumer social playbook that has long encouraged companies to expand their user base first before trying to profit off users at all (see: The Snapchat Monetization Problem).

Crawford, a product marketing veteran, grew up in a cult in Oregon where girls were barred from wearing makeup and from watching television or listening to music. But because the internet was so early, the dangers of it were yet to be discovered and miraculously, she was allowed to go online. Quickly, she made connections with people all over the world thanks to everyone’s favorite messaging tool at the time, AOL Instant Messenger.

The experience planted in her a deep love for the internet and a desire to share her life online. After developing a community through AIM, Crawford became one of the very first original content creators on YouTube and garnered millions of views on her videos. Without trying, she became an influencer, long before the term entered the zeitgeist.

She used her newfound digital prowess to launch one of the first social marketing agencies, where her clients included Weight Watchers and Kmart, legacy brands that had no idea how to tap into her native digital communities. Ultimately, Crawford landed in the tech startup world, hopping from Series A startup to Series A startup, offering up her product marketing skills before her daughter’s idea prompted her to go into business on her own again.

“I’m a techno-optimist and yet, so many of these tech companies we thought were going to connect people turned out to have accidentally made people more lonely,” she said. “With a different lens and approach, I thought there could be an app that built bridges.”

Now with a new bout of funding, Squad can implement strategic marketing campaigns, continue adding integrations with complementary platforms (the startup has just announced a new integration with YouTube) and hire product designers. The next few years will be critical to Squad’s success as it looks to young people to give them a permanent spot on their home screen.

For Crawford, what’s most important, aside from the growing group of teenagers using Squad, is to make sure only good people see a big payday thanks to her great idea: “I am ready to do everything I can to make Squad successful and make sure our success has a positive downstream effect so that we have great people on our team that get rich off our success.”