The growing popularity of 3D printing machines and companies like Thingiverse and Shapeways have given previously unimaginable powers to makers, enabling them to create everything from cosplay accessories to replacement parts. But even though 3D printing has launched a new world of customized objects, most of us are still buying clothes off the rack. Now researchers at MIT are working on software that will allow anyone to customize or design their own knitwear, even if they have never picked up a ball of yarn.

A team of researchers at MIT’s Computer Science and Artificial Intelligence Laboratory (CSAIL), led by computer scientist Alexandre Kaspar, today released two new papers describing the software. One is about a system called InverseKnit that automatically creates patterns from photos of knitted items. The other introduces new design software, called CADKnit, that allows people with no knitting or design experience to quickly customize templates, adjusting the size, final shape and decorative details (like the gloves shown below).

The final patterns can be used with a knitting machine, which has been available to home knitters for years, but still require a fair amount of technical knowledge in order to design patterns for. 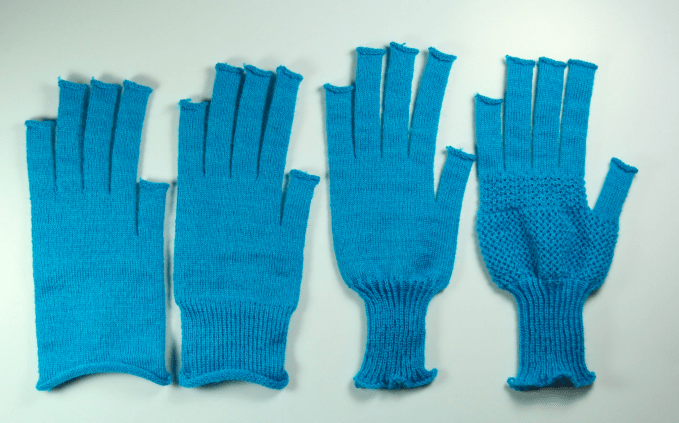 Both CADKnit and InverseKnit want to make designing and making machine-knitted garments as accessible as 3D printing is now. Once the software is commercialized, Kaspar envisions “knitting as a service” for consumers who want to order customized garments. It also can enable clothing designers to spend less time learning how to write knitwear patterns for machines and reduce waste in the prototyping and manufacturing process. Another target audience for the software are hand-knitters who want to try a new way of working with yarn.

“If you think about it like 3D printing, a lot of people have been using 3D printers or hacking 3D printers, so they are great potential users for our system, because they can do that with knitting,” says Kaspar.

One potential partner for CADKnit and InverseKnit is Kniterate, a company that makes a digital knitting machine for hobbyists, maker spaces and small businesses. Kaspar says he has been talking to Kniterate’s team about making knitwear customization more accessible.

CADKnit combines 2D images with CAD (computer-aided design) and photo-editing software to create customizable templates. It was tested with knitting newbies, who, despite having little machine knitting experience, were still able to create relatively complex garments, like gloves, and effects, including lace motifs and color patterns.

To develop InverseKnit, researchers first created a data set of knitting patterns with matching images that were used to train a deep neural network to generate machine knitting patterns. The team says that during InverseKnit’s testing, the system produced accurate instructions 94% of the time. There is still work to do before InverseKnit can be commercialized. For example, the machine was tested using one specific type of acrylic yarn, so it needs to be trained to work with other fibers.

“3D printing took a while before people were comfortable enough to think they could do something with it,” says Kaspar. “It will be the same thing with what we do.”