Starting early next year Google will present Android users in Europe with a search engine choice screen when handsets bundle its own search service by default.

In a blog post announcing the latest change to flow from the European Union’s record-breaking $5 billion antitrust enforcement against Android last year, when the Commission found Google had imposed illegal restrictions on device makers (OEMs) and carriers using its dominant smartphone platform, it says new Android phones will be shown the choice screen once during set-up (or again after any factory reset).

The screen will display a selection of three rival search engines alongside its own.

OEMs will still be able to offer Android devices in Europe that bundle a non-Google search engine by default (though per Google’s reworked licensing terms they have to pay it to do so). In those instances Google said the choice screen will not be displayed.

Google says rival search engines will be selected for display on the default choice screen, per market, via a fixed-price sealed bid annual auction — with any winners (and/or eligible search providers) being displayed in a random order alongside its own.

Search engines that win the auction will secure one of three open slots on the choice screen, with Google’s own search engine always occupying one of the four total slots.

If there aren’t enough bids to surface three winners per auction then Google says it will randomly select from a pool of eligible search providers, which it is also inviting to apply to participate in the choice screen. (Eligibility criteria can be found here.)

“Next year, we’ll introduce a new way for Android users to select a search provider to power a search box on their home screen and as the default in Chrome (if installed),” it writes. “Search providers can apply to be part of the new choice screen, which will appear when someone is setting up a new Android smartphone or tablet in Europe.”

“As always, people can continue to customize and personalize their devices at any time after set up. This includes selecting which apps to download, changing how apps are arranged on the screen, and switching the default search provider in apps like Google Chrome,” it adds.

Google’s blog post makes no mention of whether the choice screen will be pushed to the installed base of Android devices. But a spokeswoman told us the implementation requires technical changes that means it can only be supported on new devices.

Default selections on a dominant platform are of course hugely important for gaining or sustaining market share. And it’s only since competition authorities dialed up their scrutiny that the company has started to make some shifts in how it bundles its own services in dominant products such as Android and Chrome.

Earlier this year Google quietly added rival pro-privacy search engine DuckDuckGo as one of the default choices offered by its Chrome browser, for example.

In April it also began rolling out choice screens to both new and existing Android users in Europe — offering a prompt to download additional search apps and browsers.

In the latter case, each screen shows five apps in total, including whatever search and browser is already installed. Apps not already installed are included based on their market popularity and shown in a random order. 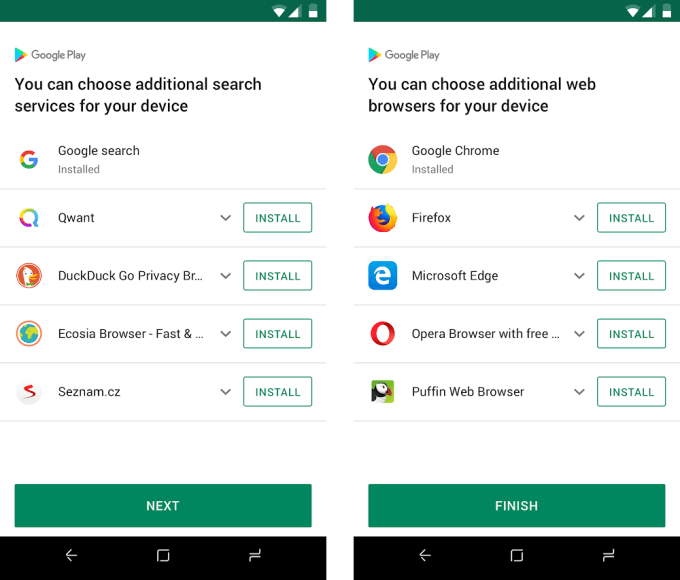 French pro-privacy search engine Qwant told us that since the rollout of the app service choice screen to Android devices the share of Qwant users using its search engine on mobile has leapt up from around 2% to more than a quarter (26%) of its total user base.

Qwant co-founder and CEO Eric Léandri said the app choice screen shows that competing against Google on search is possible — but only “thanks to the European Commission” stepping in and forcing the unbundling.

However, he raised serious concerns about the sealed bid auction structure that Google has announced for the default search choice — pointing out that many of the bidders for the slots will also be using Google advertising and technology; while the sealed structure of the auction means no-one outside Google will know what prices are being submitted as bids, making it impossible for rivals to know whether the selections Google makes are fair.

Even Google’s own FAQ swings abruptly from claims of the auction it has devised being “a fair and objective method” for determining which search providers get slots, to a flat “no” and “no” on any transparency on bid amounts or the number of providers it deems eligible per market…

“Even if Google is Google some people can choose something else if they have the choice. But now that Google knows it, it wants to stop the process,” Léandri told TechCrunch.

“It is not up to Google to now charge its competitors for its faulty behavior and the amount of the fine, through an auction system that will benefit neither European consumers nor free competition, which should not be distorted by such process,” Qwant added in an emailed press statement. “The proposed bidding process would be open to so-called search engines that derive their results and revenues from Google, thereby creating an unacceptable distortion and a high risk of manipulation, inequity or disloyalty of the auction.”

“The decision of the European Commission must benefit European consumers by ensuring the conditions of a freedom of choice based on the intrinsic merits of each engine and the expectations of citizens, especially regarding the protection of their personal data, and not on their ability to fund Google or to be financed by it,” it also said.

In a further complaint, Léandri said Google is requiring bidders in the choice screen auction to sign an NDA in order to participate — which Qwant argues would throw a legal obstacle in the way of it being able to participate, considering it is a complainant in the EU’s antitrust case (ongoing because Google is appealing).

“Qwant cannot accept that the auction process is subject to a non-disclosure agreement as imposed by Google while its complaint is still pending,” it writes. “Such a confidentiality agreement has no other possible justification than the desire to silence its competitors on the anomalies they would see. This, again, is an unacceptable abuse of its dominant position.”

We’ve reached out to the Commission with questions about Google’s choice screen auction. Update: A Commission spokesperson told us:

The decision provides rival search providers the possibility to strike exclusive pre-installation deals with smartphone and tablet manufacturers. This was not possible before.

We will be closely monitoring the implementation of the choice screen mechanism, including listening to relevant feedback from the market, in particular in relation to the presentation and mechanics of the choice screen and to the selection mechanism of rival search providers. The Commission is committed to a full and effective implementation of the decision.

DuckDuckGo founder Gabriel Weinberg has also been quick to point to flaws in the auction structure — writing on Twitter: “A ‘ballot box’ screen could be an excellent way to increase meaningful consumer choice if designed properly. Unfortunately, Google’s announcement today will not meaningfully deliver consumer choice.

“A pay-to-play auction with only 4 slots means consumers won’t get all the choices they deserve, and Google will profit at the expense of the competition. We encourage regulators to work with directly with Google, us, and others to ensure the best system for consumers.”