Yesterday, Tyler “Ninja” Blevins announced that he’s leaving Twitch, moving his streaming career over to Microsoft’s Mixer platform. This morning, Mixer has shot to the top of the App Store’s free app charts.

Microsoft acquired Mixer in 2016, back when it was called Beam, and has been trying to grow the platform since. However, Mixer has had a tough go of it with competition from the industry leader, Twitch, as well as other tech giants like Google (YouTube) and Facebook.

In fact, Mixer represented just 3% of game streaming viewership hours in the last quarter, according to StreamElements.

Microsoft had this to say about Ninja’s move: 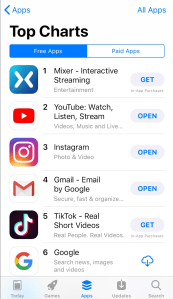 Ninja announced the news with a video, which didn’t offer much by way of reasons for the move. It’s highly likely that Microsoft paid a pretty penny for it, though that hasn’t been officially confirmed.

In less than 24 hours, his new Mixer channel has picked up more than 250,000 followers, and Mixer has risen to the top of the App Store charts.

It’s early days for the switch, but it’s still a long way to go to get back to the 14 million followers Ninja enjoyed on Twitch.