Spotify added 8 million subscribers in the quarter that ended in June, slightly below the estimated 8.5 million figure, the streaming giant reported today.

“We missed on subs… That’s on us,” the company said.

Paying subscribers include users who are enjoying the 30-day trial Spotify offers. Additionally, Spotify recently kickstarted a biannual campaign, which offered customers access to the premium service for $1.

This, among other factors, has pushed its average revenue per user to €4.86 ($5.42) — down 1% since last quarter — the company said, adding that it expects the decline to continue in the low single digits for the rest of the year. 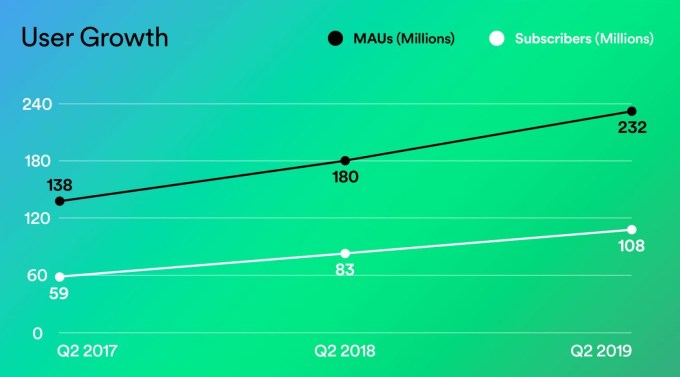 In comparison, Apple Music had 60 million paying subscribers as of June this year. (This also includes users who are part of Apple Music’s three-month free trial.)

On the business side, Spotify said its quarterly revenue rose 31% from the same period last year to $1.86 billion, while operating expenses increased 4%. Its operating loss narrowed to $3.34 million, the company said — better than estimations of analysts who expected Spotify to lose about $62 million on sales of $1.83 billion.

Additionally, Spotify revealed that it has reached an agreement with two of the four major record labels for licenses and is in active talks with the other two. It did not identify the labels.

Spotify’s future profits — and losses — will depend on how its existing margins change during the negotiations with the music labels. The bulk of the revenue Spotify generates goes to the music labels. Every few years, they all meet to renew their agreements.

The music streaming service, which has ramped up its podcast offerings with the acquisition of Gimlet Media, Anchor and Parcast, said its podcast audience is up 50% since the last quarter. Barry McCarthy, CFO of Spotify, said the company is still open to acquiring more podcasting businesses.

Spotify, which earlier this year filed a complaint in Europe accusing Apple of stifling competition, did not talk about the iPhone-maker today. (Apple has refuted the accusation.) The company also did not speak much about India, where it launched its music streaming service in February. In late April, Spotify said it had amassed 2 million users in India. “Our newest market, India, performed well and in line with expectations,” it said today.

Spotify Lite for Android gets an official launch in 36 countries