Lobbying, whether we like it or not, is an effective way to enact political change. But it has historically only been available to special interest groups and corporations with hoards of cash on hand. CrowdLobby, a non-partisan organization that launched this month, hopes to change that.

Last year, corporations and special interest firms spent $3.5 billion on lobbying, according to The Center for Responsive Politics. Through CrowdLobby, the aim is to help everyday people crowdfund to hire lobbyists of their own.

“Lobbyists do have a huge effect on current legislative processes,” CrowdLobby co-founder and CEO Heidi Drauschak (pictured above on right), a lawyer with experience in the lobbying industry, told TechCrunch. “Until we can totally change the whole structure, we have to play the game. It’s not that the game is a horrible game, but it’s just that not everyone gets a chance to play.”

CrowdLobby works by featuring campaigns around issues that its community has deemed to be important. From there, anyone can contribute to the campaign — which generally seeks $50,000. The team landed on that amount after having conversations with lobbyists regarding what it would take to make a change on a state level. CrowdLobby only charges you if the campaign hits its target.

“If enough funds are raised around a specific issue, we facilitate that aggregation and the hiring of the lobbyist itself,” Drauschak said.

In order to make money, CrowdLobby charges a processing fee. The startup is still experimenting with what to charge, but currently has a 25% processing fee in place. That’s undoubtedly higher than processing fees to which people are generally accustomed, but Drauschak stressed that CrowdLobby is a two-sided marketplace that facilitates the entire lobbying process. That means aggregating the funds, figuring out which lobbyist to hire and then engaging in ongoing communications with the lobbyist.

“We want to give people the exact same benefits that someone who normally hires a lobbyist would get,” Drauschak said.

CrowdLobby officially launched this month with three featured campaigns focused on education, cannabis decriminalization and autism in the state of Virginia, which is where the company is headquartered. 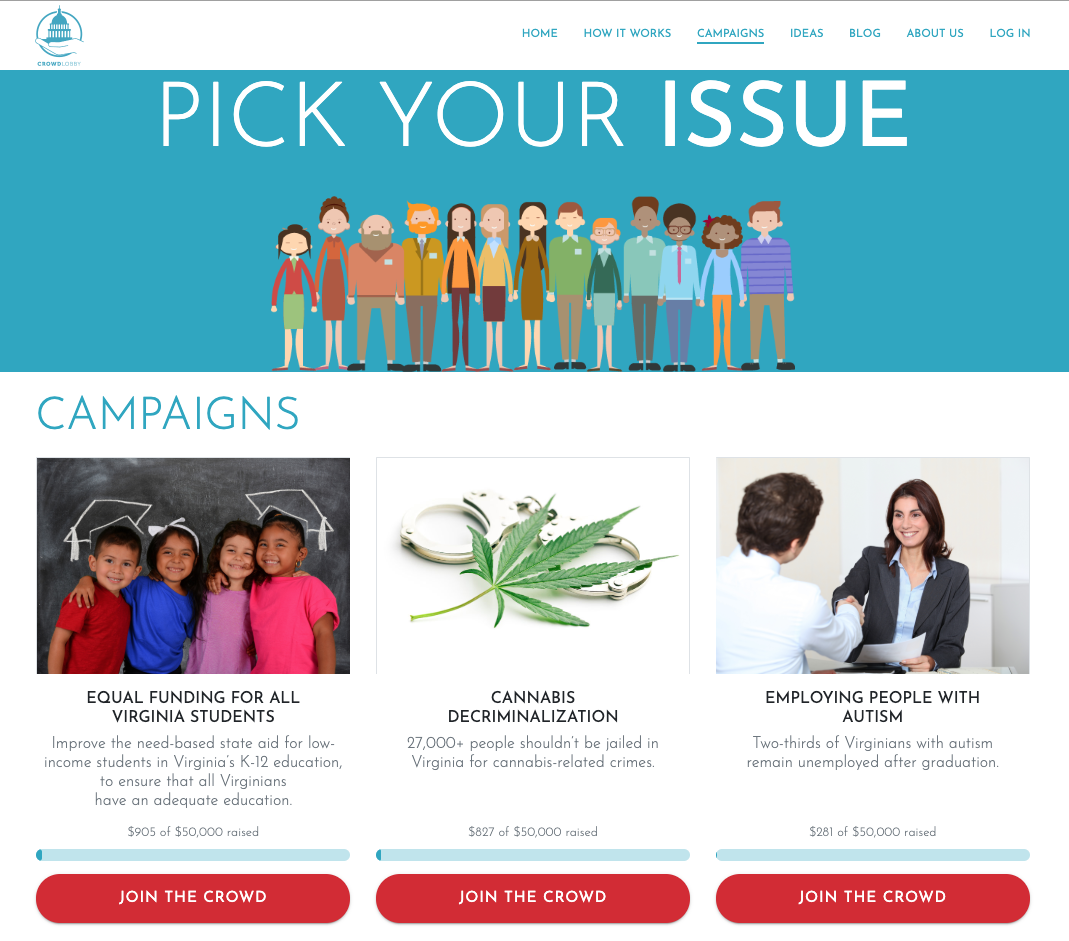 “The community can determine if a campaign goes live,” CrowdLobby co-founder and COO Sam Biggio (pictured above on left) told TechCrunch. “We try to stay out of that process as much as possible and be the objective tool for whatever the people want.”

Currently, CrowdLobby is working with a handful of lobbyists. But the ideal number of lobbyists depends on how many campaigns CrowdLobby has going at any given time. Right now, the goal is to build a team of lobbyists that demonstrates the credibility of the platform, Drauschak said.

CrowdLobby plans to offer campaigns in additional states by next year, at the latest, as well as get some additional campaigns off the ground. CrowdLobby does not have traditional venture funding, but raised $35,000 in a Kickstarter campaign and is currently participating in the Lighthouse Labs accelerator in Richmond, Va., where they received additional funding.

“Anything political is always going to be dicey,” Drauschak said. “But we’ve been setting ourselves up to take [the venture funding] route when we’re ready.”