Cann, a Los Angeles-based purveyor of CBD and THC-infused intoxicants, is rolling out its first major distribution through the venture-backed delivery service Eaze as it begins to hit the streets in California.

The company, founded by two former Bain consultants, is the latest to take on the growing market for non-alcoholic intoxicants that use a combination of chemicals traditionally found in the marijuana plant to make their drinks.

First dreamed up by Jake Bullock while attending business school at Stanford, Cann launched earlier this month at MedMen and is now selling its $30 multi-flavor six-packs both in stores and through Eaze.

The beverages come with a 2 milligram dose of THC and 5 milligrams of CBD per can.

Bullock and his partner Luke Anderson met while both men were at Bain Consulting — and both have a background in consumer retail businesses. Bullock initially worked at the investment bank Allen & Co. before moving over to Bain for consulting and finally settling in to a job at Bain Capital investing in the firm’s San Francisco-based private equity shop.

Anderson remained at Bain Consulting until Bullock pulled him away to start Cann.

Combining low doses of THC and CBD isn’t a new concept. K-Zen Beverages has raised $5 million from the investment firm DCM to roll out its line of intoxicants and California Dreamin’ is a Y Combinator-backed intoxicant containing a whopping 10 milligrams of THC.

Bullock graduated from Stanford in 2018 and convinced Anderson to quit his job; the company raised cash through the fall and collected a cool $1.5 million for their venture.

Unlike other brands that are going for more fruity flavored beverages, Bullock and Anderson chose more herbaceous and floral flavors for their drinks — grapefuit and rosemary, lemon and lavender and blood orange and cardamom (honestly, it seems they’d go well with alcohol rather than replace it).

“We’re really proud of it being an innovative flavor profile and really interesting with the microdose on THC,” says Anderson.

For Eaze, which has stayed away from cannabis beverages, Cann seems to be a literal gateway for consumers who have been unwilling to try higher-dosage drinks. 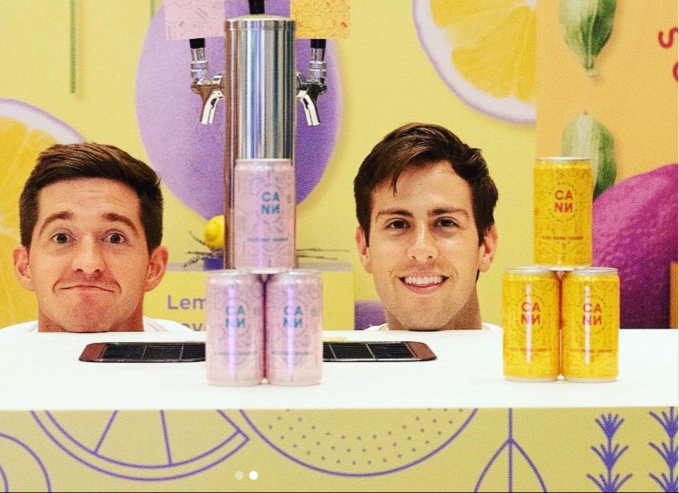 “They see this big blue ocean of future cannabis users that they haven’t accessed yet,” says Bullock.

Younger consumers seem more willing to experiment with intoxicants other than traditional spirits these days, and venture capital firms are buzzed by the possibility of returns like the ones reaped by the George Clooney-founded spirit company Casamigos (which sold for $1 billion).

Kin Euphorics, backed by KBW Ventures, Canaan and Fifty Years is using chemicals other than cannabis to get that buzz, but most investors are looking at cannabis for the high and euphoria of intoxicating returns.

Cann, did a soft launch in June with a limited release across four MedMen stores in Los Angeles. “You start really small and notice what people are purchasing and what’s driving repurchasing,” says Anderson. “We had this fortunate problem of it flying off of the shelf with its packaging and flavor differentiation.”

And the company’s founders are also aware of the blatant injustice inherent in their ability to launch a drug distribution and delivery business in 2019 in Los Angeles when the city’s minority communities have been ravaged by the criminal justice system for doing the same thing.

So far, the company has taken the step of reaching out to 4thMVMT, the organization founded by Karim Webb to bring entrepreneurialism and investment to communities that have been damaged by the “War on Drugs.”

“We talk to them pretty frequently,” says Bullock. “We’re hoping that their first class will take over all their dispensaries… But we have a standing offer for anyone who they send over to us.”

For both Bullock and Anderson, their involvement in the cannabis industry also ties in to their own identities as gay men. “The role that cannabis played in the AIDS crisis, when the process to decriminalize was driven by the real need for that medicine,” says Anderson. “We’re early and it’s young, but part of the reason we launched the business was to make an impact in communities with our company.”