Hours after receiving a record $5 billion FTC fine on privacy violations, Facebook delivered a Q2 earnings beat with revenue of $16.9 billion with $1.99 adjusted EPS compared to the Zacks Consensus Estimate of $1.90 EPS on revenue of $16.45 billion.

Facebook reported it has 1.59 billion DAUs and 2.1 billion daily active users of its family of apps. The U.S. & Canada and Asia-Pacific contingents continued to see nearly flat growth while the company saw quicker growth in its European and “Rest of World” sectors. 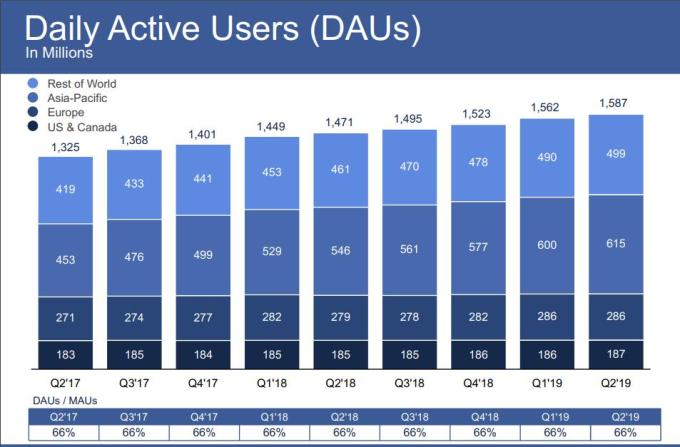 The company’s stock was up around 3% in after-hours trading.

Facebook detailed that it will be paying a $5 billion FTC fine and submitting to certain stipulations, as was confirmed this morning, but for those hoping this agreement signaled the end of Facebook’s FTC troubles, the earnings report detailed that may not be the case. The release disclosed that last month the FTC opened an antitrust investigation of Facebook; this news follows reports of a DOJ investigation into the company — among others — as well.

“The online technology industry and our company have received increased regulatory scrutiny in the past quarter,” the earnings release reads. “In June 2019, we were informed by the FTC that it had opened an antitrust investigation of our company. In addition, in July 2019, the Department of Justice announced that it will begin an antitrust review of market-leading online platforms.”