Take a moment to imagine the most successful salesperson you know.

Is it someone you respect? Probably not. That, precisely, is the problem Bravado — a startup emerging from stealth today with $12 million in backing from Redpoint Ventures, Freestyle Capital, Precursor Ventures, Village Global and Kindred Ventures — is working to solve.

Sahil Mansuri, Bravado founder and chief executive officer, got his start in sales. A gifted student, his father’s health issues forced him to land a job straight out of college that would make him a lot of money, and fast. When his career counselor suggested he search for an opportunity in sales, he envisioned a crowded office packed with obnoxious telemarketers, not a lucrative position in B2B sales in his hometown of San Francisco.

Mansuri grew to adore sales so much he built a company focused on evangelizing the profession. Before diving head-first into his own venture, Mansuri served as a vice president at SalesPredict, an eBay-acquired business that uses data to predict customer buying behavior and sales conversion. Before that, he worked his way up at Glassdoor, becoming the top-performing sales representative at the platform for submitting anonymous company reviews.

Although Mansuri’s parents, Indian immigrants, were initially horrified by their son’s career choice, they’ve since come around. His hope now is to help the general public develop a more favorable view of the sales profession, too.

“Sales has been transformative for my family,” Mansuri tells TechCrunch. “But when I say sales has a negative stigma, I know because I’ve lived it. That’s my life story.”

“Sales isn’t a profession that’s celebrated,” he added. “You can think of all these great engineers and product managers but you can’t think of any great people in sales.” 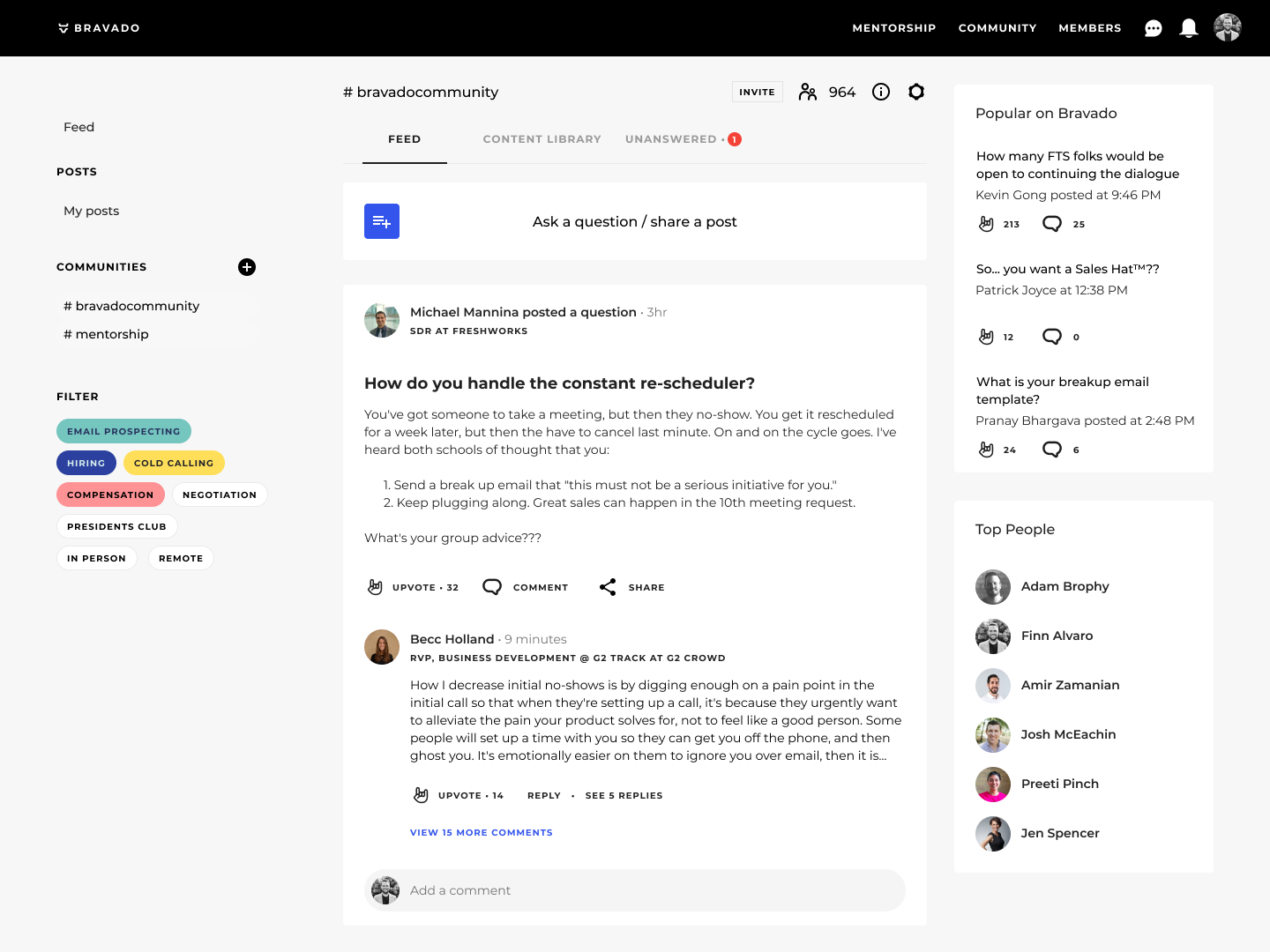 Bravado, yet to monetize its platform in any fashion, is focusing its efforts on building out its network. Currently, sales professionals can use the platform to develop credibility through the Bravado Credibility Score, which is based on customer testimonials recorded directly on a sales professional’s Bravado profile. The company is also helping sales workers develop their careers through networking events and workshops.

Fostering the next generation of sales professionals is the final piece of the Bravado business. Mansuri pointed out that none of the top 100 universities in the U.S. have sales majors, making it rather impossible for students to dream of becoming sales experts. Through Bravado’s sales mentorship program, students are provided sales curricula, the opportunity to be placed at companies in sales roles and a growing network of sales professionals. It’s a “mini pre-professional path to sales,” says Mansuri.

Diversity is important to the team, too. There’s a reason sales has a fratty reputation; it’s a predominately white and male field with fewer than 25% women and a serious lack of minorities and LGBTQ folks. Bravado is putting forth a content strategy in an attempt to highlight these issues and invite new faces into the sales community.

“We want to build a world in which the best talent, no matter what they look like, is like ‘I really want to be in sales because that’s an awesome career,’ ” Mansuri explained.

Bravado’s community includes 50,000 members and 1,000 sales teams from Salesforce, LinkedIn, Microsoft, Slack, WeWork, Uber, Oracle, IBM and others. The startup recently attracted an $8.5 million Series A led by Redpoint Ventures’ Alex Bard and Annie Kadavy, a majority of which will be used to expand its membership base. When it comes time to make money, the company says it will attract dollars through a suite of to-be-developed “premium products.”

For Bravado to accomplish its goals, it must inspire the public to reimagine the salesperson stereotype, as well as encourage students across the U.S. to enter and redefine the sales field.

“Sales is perceived as a career for the leftovers,” Mansuri said. “We want to bring respect and credibility to the sales profession and share why it is that sales is a wonderful career.”

Showpad, a sales enablement platform for presentations and other collateral, raises $70M