Axis is selling its first product, the Axis Gear, on Amazon and direct from its own website, but that’s a relatively recent development for the four-year-old company. The idea for Gear, which is a $249.00 ($179.00 as of this writing thanks to a sale) aftermarket conversion gadget to turn almost any cord-pull blinds into automated smart blinds, actually came to co-founder and CEO Trung Pham in 2014, but development didn’t begin until early the next year, and the maxim that “hardware is hard” once again proved more than valid.

Pham, whose background is actually in business but who always had a penchant for tech and gadgets, originally set out to scratch his own itch and arrived upon the idea for his company as a result. He was actually in the market for smart blinds when he moved into his first condo in Toronto, but after all the budget got eaten up on essentials like a couch, a bed and a TV, there wasn’t much left in the bank for luxuries like smart shades — especially after he actually found out how much they cost.

“Even though I was a techie, and I wanted automated shades, I couldn’t afford it,” Pham told me in an interview. “I went to the designer and got quoted for some really nice Hunter Douglas. And they quoted me just over $1,000 a window with the motorization option. So I opted just for manual shades. A couple of months later, when it’s really hot and sunny, I’m just really noticing the heat so I go back to the designer and ask him ‘Hey can I actually get my shades motorized now, I have a little bit more money, I just want to do my living room.’ And that’s when I learned that once you have your shades installed, you actually can’t motorize them, you have to replace them with brand new shades.”

With his finance background, Pham saw an opportunity in the market that was ignored by the big legacy players, and potentially relatively easy to address with tech that wasn’t all that difficult to develop, including a relatively simple motor and the kind of wireless connectivity that’s much more readily available thanks to the smartphone component supply chain. And the market demand was there, Pham says — especially with younger homeowners spending more on their property purchases (or just renting) and having less to spare on expensive upgrades like motorized shades. 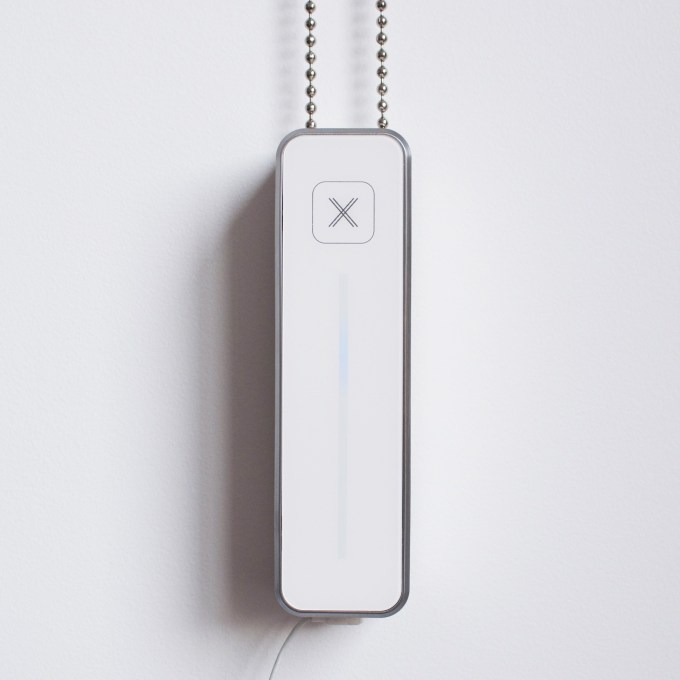 The Axis solution is relatively affordable (though its regular asking price of $249 per unit can add up, depending on how many windows you’re looking to retrofit) and also doesn’t require you to replace your entire existing shades or blinds, so long as you have the type with which the Gear is compatible (which includes quite a lot of commonly available shades). There are a couple of power options, including an AC adapter for a regular outlet, or a solar bar with back-up from AA batteries in case there’s no outlet handy.

Pham explained how in early investor meetings, he would cite Dyson as an inspiration, because that company took something that was standard and considered central to their very staid industry and just removed it altogether — specifically referring to their bagless design. He sees Axis as taking a similar approach in the smart blind market, which has too much to gain from maintaining its status quo to tackle Axis’ approach to the market. Plus, Pham notes, Axis has six patents filed and three granted for its specific technical approach.

“We want to own the idea of smart shades to the end consumer,” he told me. “And that’s where the focus really is. It’s a big opportunity, because you’re not just buying one doorbell or one thermostat – you’re buying multiple units. We have customers that buy one or two right away, come back and buy more, and we have customers that buy 20 right away. So our ability to sell volume to each household is very beneficial for us as a business.”

Which isn’t to say Axis isn’t interested in larger-scale commercial deployment — Pham says that there are “a lot of [commercial] players and hotels testing it,” and notes that they also “did a project in the U.S. with one of the largest developers in the country.” So far, however, the company is laser-focused on its consumer product and looking at commercial opportunities as they come inbound, with plans to tackle the harder work of building a proper commercial sales team. But it could afford Axis a lot of future opportunity, especially because their product can help building managers get compliant with measures like the Americans with Disabilities Act to outfit properties with the requisite amount of units featuring motorized shades.

To date, Axis has been funded entirely via angel investors, along with family and friends, and through a crowdfunding project on Indiegogo, which secured its first orders. Pham says revenue and sales, along with year-over-year growth, have all been strong so far, and that they’ve managed to ship “quite a few units so far” — though he declined to share specifics. The startup is about to close a small bridge round and then will be looking to pin down its Series A funding as it looks to expand its product line — with a focus on greater window coverings style compatibility as top priority.