As the ways we consume content multiply and change, media creators are hard-pressed to adapt their methods to take advantage. Short-form audio and video news is one growing but labor-intensive niche — and Agolo aims to help automate the process, pulling in the AP as a client and Microsoft, Google and Tensility as investors.

Agolo is an AI startup focused on natural language processing; specifically, how to take a long article, like this one, and boil it down to its most important parts (assuming there are any). Summarization is the name of the process, as it is when you or I do it, and other bots and services do it, as well. Agolo’s claim is to be able to summarize quickly and accurately, producing something of a quality worthy of broadcast or official documentation. Its deal with the AP provides an interesting example of how this works, and why it isn’t as simple as picking a few representative sentences. 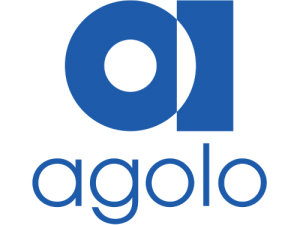 The AP is, of course, a huge news organization, and a fast-moving one. But its stories, while spare as a rule, are rarely concise enough to be read aloud by a virtual assistant when its user asks “what’s the big news this morning?” As a result, AP editors and writers manually put together scores or hundreds of short versions of stories every day specifically for audio consumption and other short-form contexts.

Because this isn’t a situation where creative input is necessarily required, and it must be done quickly and systematically, it’s a good fit for an AI agent trained in natural language. Even so, it isn’t as easy as it sounds, explained Agolo co-founder and CEO Sage Wohns.

“The way that we have things read to us is different from the way we read them. So the algorithm understanding that and reproducing it is important,” he said. And that’s without reckoning with the AP’s famous style guide.

“This is one of the most important points that we worked on with them,” Wohns said. “The AP has their style bible, and it’s a brick. We have a hybrid model that has algorithms pointed at each of those rules. We never want to change the language, but we can shorten the sentence.” 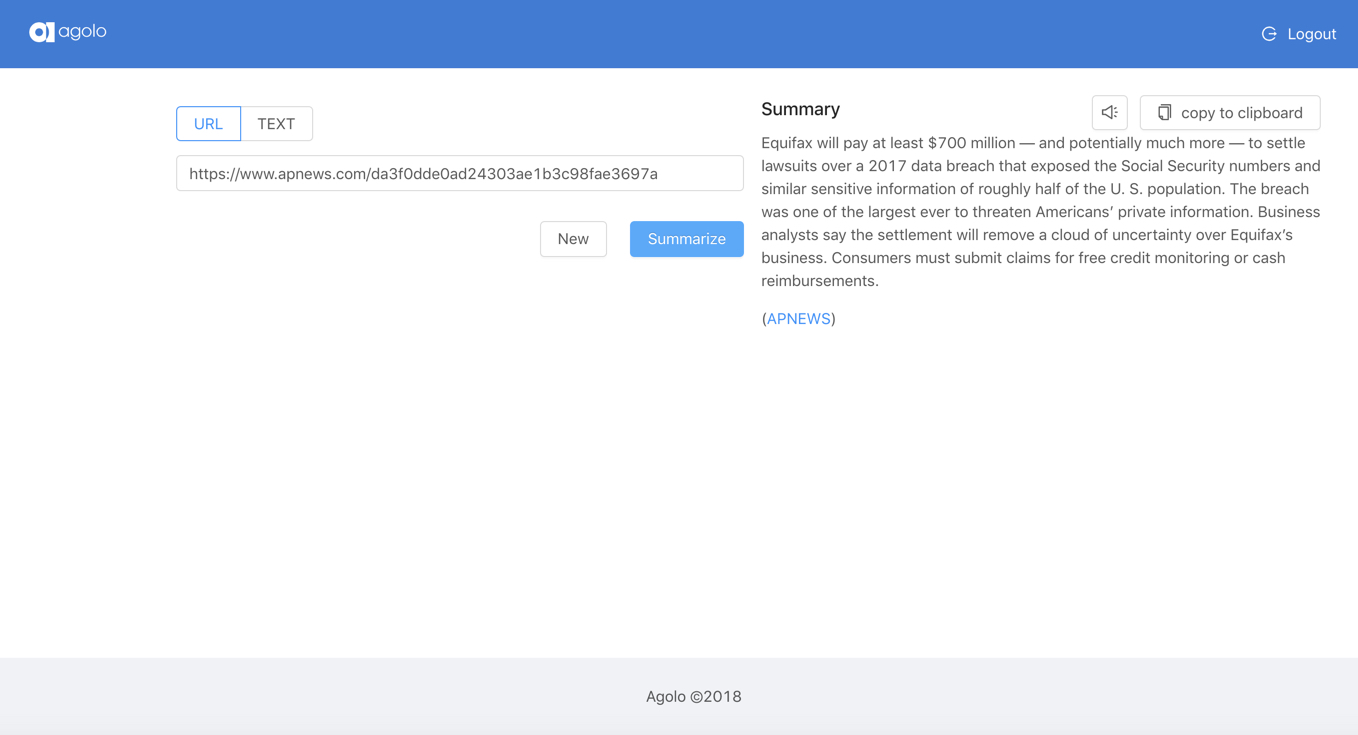 That’s a risk with algorithmic summarizing, of course: that in “summarizing” a sentence you change its meaning. That’s incredibly important in the news, where the difference between a simple statement of fact and an egregious error can easily be in a single word or phrase. So the system is careful to preserve meaning if not necessarily the exact wording.

While the AP may not be given, as I am, to circumlocutions, it may still be beneficial to shift things a bit, though. Agolo worked closely with the news organization to figure out what’s acceptable and what’s not. A simple example would be changing something like “Statement,” said the source to The source said “Statement.” That doesn’t save any space, but you get the idea: essentially lossless compression of language.

If the AP team can trust the algorithm to produce a well-worded summary that follows their rules and only takes a quick polish by an editor, they could serve and even grow the demand for short-form content. “The goal is to enable them to create more content than was humanly possible before,” said Wohns.

The investment from and collaboration with Google falls along these lines as well, though not as laser-focused on turning news stories into sound bites.

“What we’re working on with them is making the web listenable,” said Wohns. “Right now you can ask Google a question, but it often doesn’t have an answer it can read back to you.”

It’s primarily a bid to extend the company’s Assistant product as it continues its combat with Alexa and Siri, but may also have the extremely desirable side effect of making the data Google indexes more accessible to blind users.

The scope of Google’s data (Agolo is probably now getting the full firehose of Google News, among other things) means that the AI model being used has to be lightweight and quick. Even if it takes only 10 seconds to summarize every article, that gets multiplied thousands of times in the complex workings of sorting and displaying news all over the world. So Agolo has been very focused on improving the performance of its models until they are able to turn things around very quickly and enable an essentially real-time summary service. 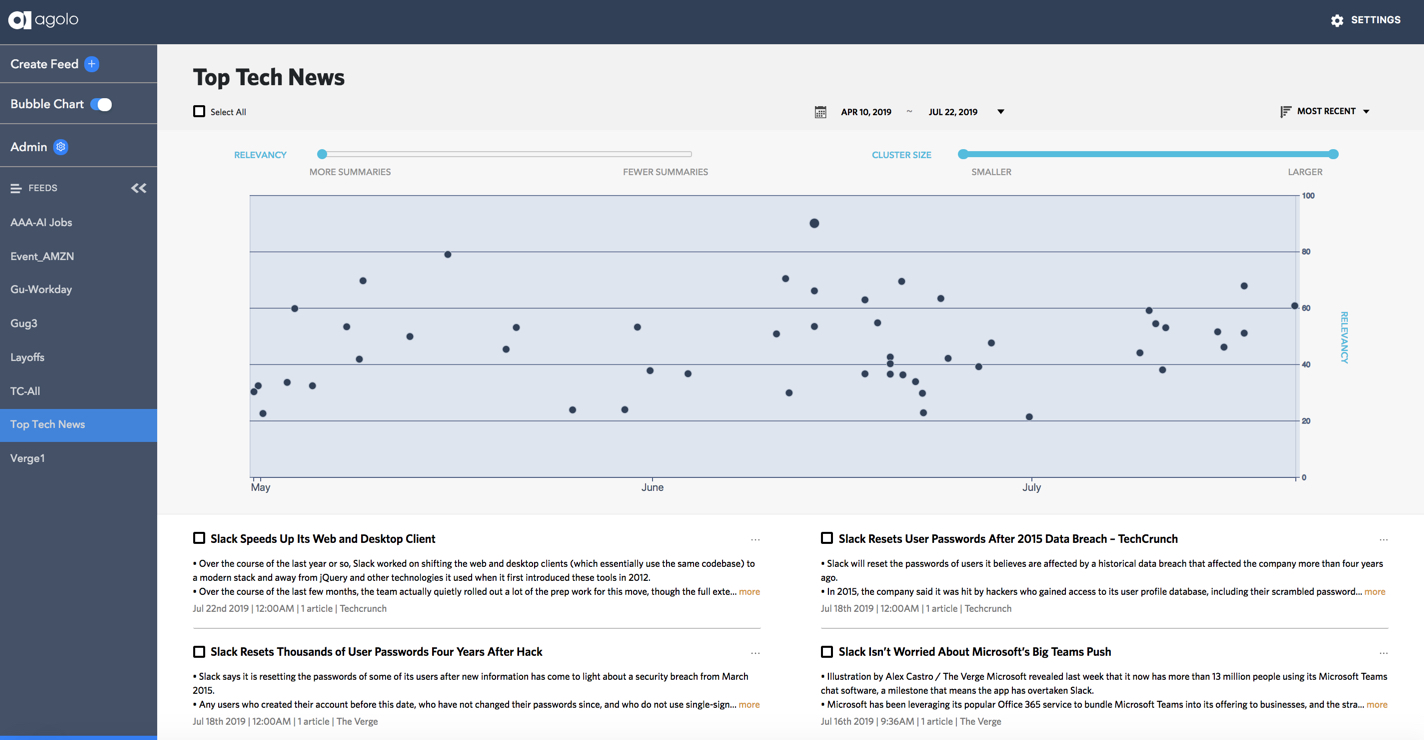 This has a secondary application in large enterprises and companies with large backlogs of data like documentation and analysis. Microsoft is a good example of this: After decades of running an immense software and services empire, the number of support docs, studies, how-tos and so on are likely choking its intranet and search may or may not be effective on such a corpus.

NLP-based agents are useful for summarizing, but part of that process is, in a way, understanding the content. So the agent should be able to produce a shorter version of something, but also tell you that it’s by this person (useful for attribution); it’s about this topic; it’s from this date range; it applies to these version numbers; its main findings are these; and so on and so forth.

Not all this information is useful in all cases, of course, but it sure is if you want to digest 30 years of internal documentation and be able to search and sort it efficiently. This is what Microsoft is using it for internally, and no doubt what it intends to apply it to as part of future product offerings or partnerships. (Semantic Scholar has applied a similar approach to journals and academic papers.)

It would also be helpful for, say, an investment bank analyst or other researcher, who can use Agolo’s timeline to assemble all the relevant documents in order, grouped by author or topic, with the salient information surfaced and glanceable. One pictures this as useful for Google News, as well, in browsing coverage of a specific event or developing story.

The new (undisclosed amount of) funding has Microsoft (M12 specifically) returning, with Google (Assistant Investment Group specifically) and Tensility Venture Partners joining for the first time. The cash will be used in the expected fashion of a growing startup: chasing sales and a few key hires.

“It’s about building out the go-to-market side, and the core NLP abilities of the team, specifically in New York and Cairo,” said Wohns. “Right now we’re about a 90% technical team, so we need to build out the sales side.”

Agolo’s service seems like a useful tool for many an application — anywhere you have to reduce a large amount of written content to a smaller amount. Certainly that’s common enough — but Agolo will need to prove that it can do so as non-destructively and accurately as it claims with a wide variety of data sets, and that this process contributes to the bottom line more than the time-tested method of hiring another intern or grad student to perform the drudgery.