Serverless development has largely been a lonely pursuit until recently, but Serverless, Inc. has been offering a free framework for intrepid programmers since 2015. At first, that involved development, deployment and testing, but today the company announced it is expanding into monitoring and security to make it an end-to-end tool — and it’s available for free.

Serverless computing isn’t actually server-free, but it’s a form of computing that provides a way to use only the computing resources you need to carry out a given function — and no more. When the process is complete, the resources effectively go away. That has the potential to be more cost-effective than having a server that’s always on, regardless of whether you’re using it or not. That requires a new way of thinking about how developers write code.

Company founder and CEO Austen Collins says that he has been thinking a lot about what developers need to develop and deploy serverless programs, and talking to customers. He says that they really craved a more integrated approach to serverless development than has been available until now.

“What we’re trying to do is build this perfectly integrated solution for developers and developer teams because we want to enable them to innovate as much as possible and be as autonomous as possible,” Collins told TechCrunch. He says at the same time, he recognizes that operations need to connect to other tools, and the Serverless Framework provides hooks into other systems, as well. 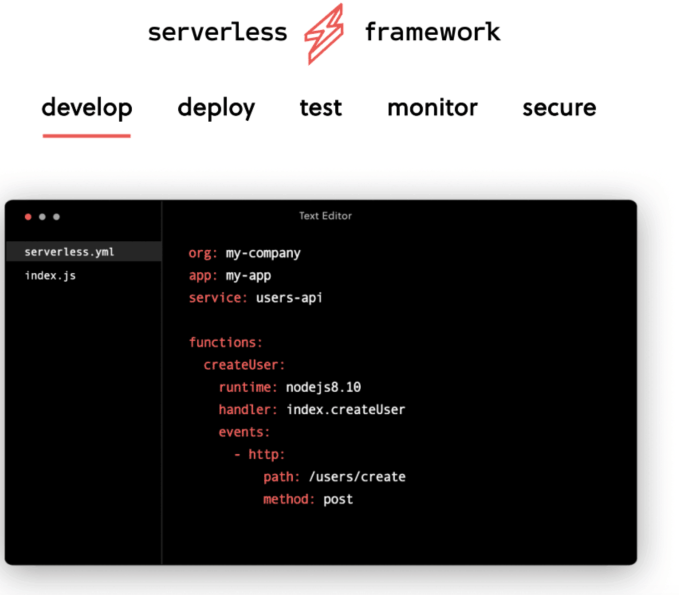 The new tooling includes an integrated environment, so that once you deploy, you can simply click an error or security event and drill down to a dashboard for more information about the issue. You can click for further detail to see the exact spot in the code where the issue occurred, which should make it easier to resolve more quickly.

While no tool is 100% comprehensive, and most large organizations, and even individual developers, will have a set of tools they prefer to use, this is an attempt to build a one-stop solution for serverless developers for the first time. That in itself is significant, as serverless moves beyond early adopters and begins to become more of a mainstream kind of programming and deployment option. People starting now probably won’t want to cobble together their own toolkits, and the Serverless, Inc. Framerwork gives them a good starting point.

Serverless, Inc. was founded by Collins in 2015 out of a need for serverless computing tooling. He has raised more than $13.5 million since inception.

Serverless and containers: Two great technologies that work better together