VCRs didn’t really exist when the first men walked on the moon, but NASA was ahead of the curve and recorded the event for posterity on videotapes — which just sold at auction for $1.8 million. The Hasselblads may have captured more detail, but there’s nothing else in the world quite like these tapes.

On July 20, 1969, Buzz Aldrin and Neil Armstrong stepped out of the Lunar Module and onto the surface of the Moon, under the watchful eye of a camera custom-made by Westinghouse for the purpose. It was mounted just outside the hatch so Aldrin could turn it on and establish a connection before he and Armstrong performed their famous descent of the LM ladder.

The camera, which was later detached and set on a tripod to capture the other surface activities, was transmitting 10 frames per second over the LM’s high-gain antenna back to Parkes Observatory in Australia. There they were recorded onto a set of large-format reel-to-reel videotape, then retransmitted to Houston, where they were recorded to 2-inch Quadruplex videotape on an Ampex VR-660B. Of course it was then formatted for TV and sent out to the world, as well.

Sadly, the original Australian slow-scan tapes were apparently later reused for other purposes, in probably the most egregious taping-over incident of all time. That means the Ampex tapes were the best known motion picture recording of Apollo 11’s lunar EVAs.

Sadly again, those original tapes were sold for $217.77 at a government surplus auction in 1976 as part of a lot of over a thousand other reels of Ampex videotape obviously thought to be no longer needed. The purchaser, Gary George, was an intern at NASA’s Johnson Space Center, and he had bought the tapes because he thought he could make a bit of scratch re-selling them to TV stations. 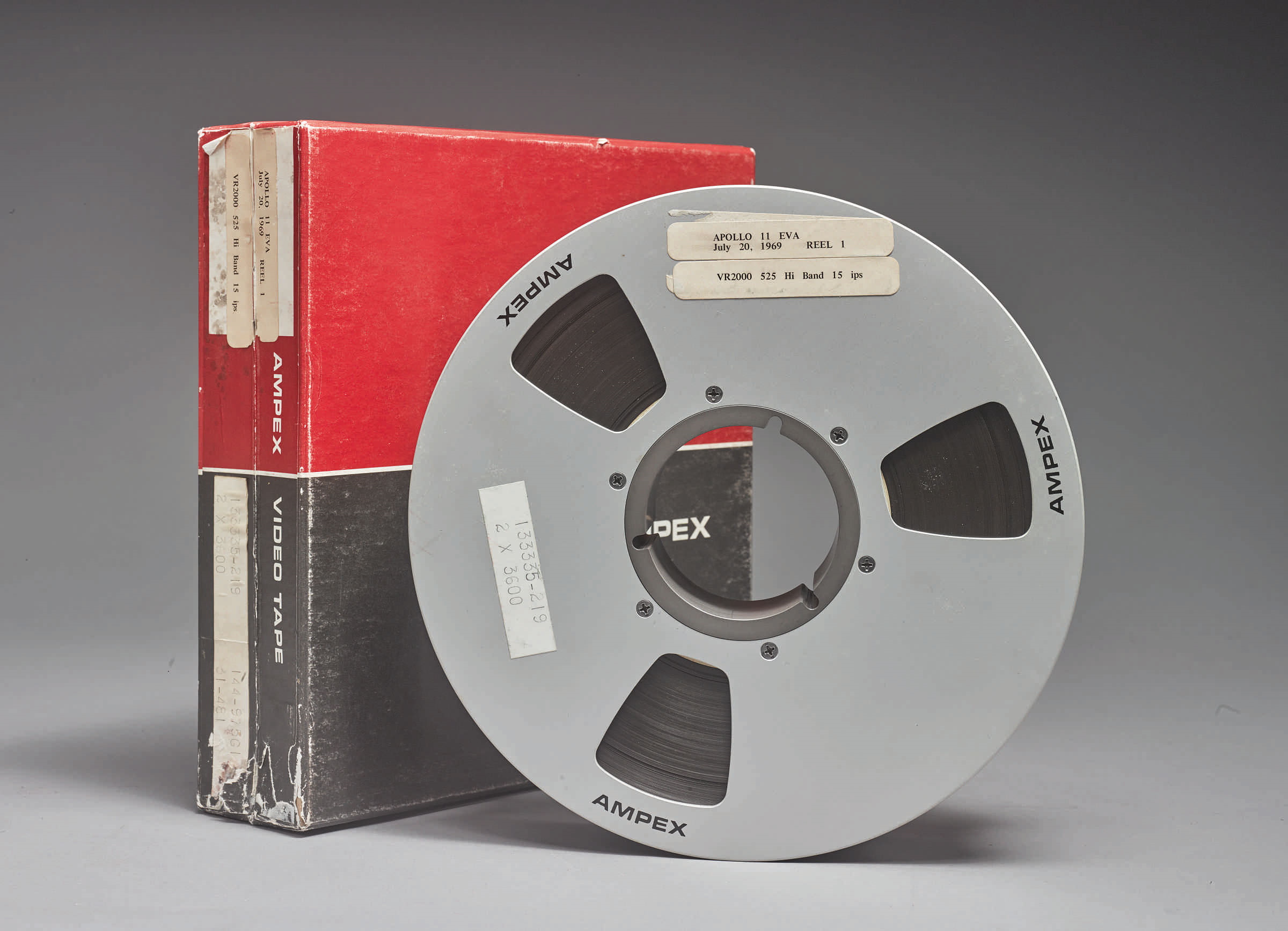 Fortunately for everyone, George noticed that three of the tapes had labels reading “APOLLO 11 EVA | July 20, 1969.” These, he reasoned, might be worth keeping. Turns out they were more than two hours of raw footage, including “One small step for man” and everything else that the world saw transpire live, but in better quality than any other copy on Earth. As Sotheby’s puts it:

The present videotapes are the only surviving first-generation recordings of the historic moon walk, and are sharper and more distinct than the few tapes that have survived from the contemporary network television broadcasts – all of which endured some loss of video and audio quality with each successive transmission from microwave tower to microwave tower.

#AuctionUpdate Unrestored, unenhanced, and unremastered, the videotapes represent the earliest, sharpest, and most accurate surviving video images of man’s first steps on the moon #Apollo50th pic.twitter.com/f2ulCpIHqz

Fast-forward 30 years and the tapes were finally brought out of storage for Apollo 11’s 40th anniversary, where they were shown for only the second time since he bought them in 1976, and digitized for posterity. They were played one more time by Sotheby’s experts while verifying these artifacts for auction over the weekend.

Tape is by no means indestructible, and it’s amazing that these are in such great condition; that and the fervor surrounding all things Moon these days must have contributed to the tapes finally going for $1.82 million, nearly four times the half-million that the auction house had predicted. Gary George made out pretty well on that surplus buy.

Of course, the purchaser has not yet revealed themselves, but perhaps in the near future we will find that it is one of the many billionaires afflicted with space madness who wanted to add this unique piece of media to their collection. And perhaps they will be generous enough to share it for public viewing — though honestly, the digital copy should be nearly indistinguishable.

Other items sold at auction for a total of hundreds of thousands more dollars are some signed Apollo 11 memorabilia, some original Apollo control panels from Kennedy’s Firing Room 1 and the first and last pages from the actual Apollo 11 flight plan that flew on the mission, which sold for about $300K by themselves. With luck, those of us without disposable income in the seven-figure range will be able to view these as well.