Online storytelling community Wattpad, also now a content feeder for streaming services and other media companies, is taking its two consumer-facing paid products global. Wattpad Premium, the ad-free subscription tier, first launched in 2017 and has only been available in a handful of countries to date. It’s now available to Wattpad’s 70 million-plus worldwide users, as of today. In addition, Wattpad’s Paid Stories, which offers exclusive, paywalled content to readers, is also now available to the global user base.

This product launched last November into beta testing, when it was then called Wattpad Next. It was initially available in the U.S. with plans for a global launch planned for this year.

Technically speaking, Wattpad quietly launched Paid Stories globally last week, but it has now completed its rollout to all users, the company says. The stories give readers another way to support their favorite writers as they can purchase the serialized content either when the story is finished, or as it’s still being written. This past month, readers spend more than 5.5 million minutes on Paid Stories, the company says.

Users purchase access to the stories using Wattpad’s virtual currency, Coins. These Coins are sold in packs that start at $0.99 for 9 Coins, and go as high as $7.99 for 230 Coins.

With the global expansion, the two products are also being better integrated. 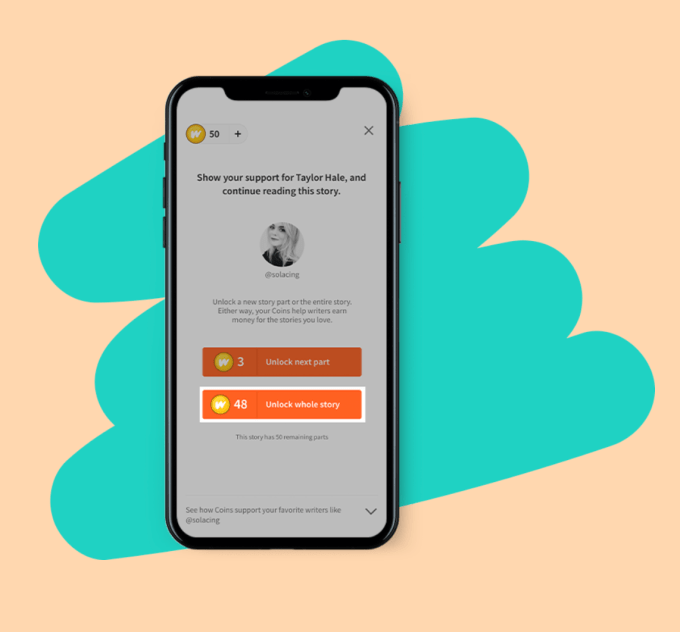 Now, Wattpad Premium subscribers will receive discounted Coins to buy the Paid Stories. They also receive bonus Coins — up to 66% more free Coins, the company says — every time they buy a Coin package to unlock a Paid Story.

“Our vision at Wattpad is to entertain and connect the world through stories, creating the best platform and community on the planet for every type of reader and writer,” said Wattpad general manager, Jeanne Lam. “Every innovation and initiative at Wattpad supports that vision while improving the experience for users. Wattpad Premium and Wattpad Paid Stories give users everywhere more control over their Wattpad experience and options to enjoy the platform in new ways — whether it’s uninterrupted, ad-free reading or the chance to support the writers who make those stories possible.”

The products do generate some revenue for the company — Wattpad is the No. 11 Top Grossing app in the Books category on the App Store and No. 8 on Google Play. However, the company’s bigger business these days is its content deals. Wattpad earlier this year inked a first-look deal with Sony Pictures Television, and has a development deal with Universal Cable Productions, among others. Internationally, it’s working with iflix, Bavaria Fiction, Huayi Brothers Korea, Penguin Random House India, Mediaset, NL Film, Mediacorp and eOne.

Wattpad’s stories have been turned into feature films, as well as movies and TV shows for streaming services like Netflix (The Kissing Booth) and Hulu (Light as a Feather).

It now has its own print publishing arm, too, with Wattpad Books.

These broader efforts capitalize on Wattpad’s generally younger and devoted fan base.

For example, one of the more popular Wattpad Books titles, The QB Bad Boy & Me by Tay Marley, was read more than 26.3 million times on Wattpad, and will become available in book form on August 20, 2019.