Haus, a startup aiming to make home ownership more affordable and flexible, is announcing that it has raised $7.1 million in new funding.

Haus was created by Uber co-founder Garrett Camp as part of his startup studio Expa. When it launched in 2016, it was focused on digitizing and bringing more transparency to the home-buying process. Since then, former Trulia executive Jonathan McNulty joined as CEO, and he’s introduced that co-investment model, where Haus helps to finance a purchase by buying equity in the home.

The idea is that instead of taking on debt, the homeowner is sharing with Haus both the risks and the rewards of changing home values. And instead of paying off a mortgage, the homeowner makes monthly payments to Haus that both purchases more equity and pays the startup and its investors.

The company estimates that these payments are, on average, 30% lower than a traditional mortgage payment. In an email, McNulty said that Haus caps the “option” portion of the payment so that homeowners are always purchasing as much equity as they did with their first payment, even if the home’s value increases. 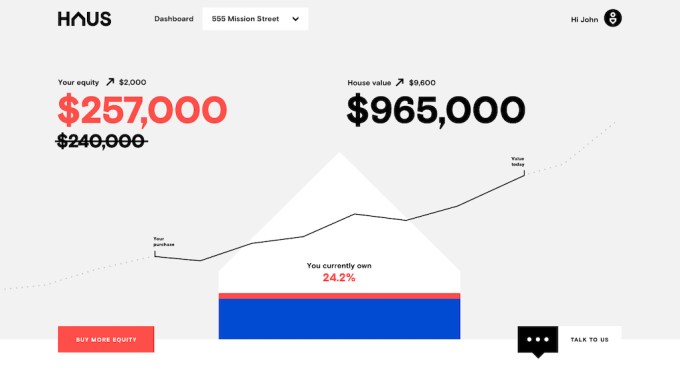 “From a consumer perspective, there have historically only been two ownership options, pay cash for your home, or borrow money from a bank or lender with a mortgage,” he said. “With Haus, we replace that mortgage relationship and create a direct partnership with the consumer to create an entirely new way of financing a home.”

Haus can also work with existing homeowners to replace part or all of their mortgage — McNulty noted that in some cases, it may make sense “to keep some mortgage debt active for tax purposes.”

When asked about how consumers have responded so far, McNulty declined to provide specific numbers, but he said the service is active in Washington, California and Oregon, and that “the early demand is significant, which makes sense given the affordability challenges we see in these western states.”

Other new investors include RIT Capital Partners and Tim Ferriss. McNulty said the funding will allow the company to expand its team, particularly to do more marketing and to enter new geographies.

“The current real estate model has been broken for a long time,” Montage Ventures partner Matt Murphy said in a statement. “Homeownership … for people ages 25 to 34 is much lower than it should be. We are excited to partner with Haus to bring much needed relief to current homeowners and prospective buyers alike.”