Glade Brook Capital, a late-stage fund based in Greenwich, Conn., led this round, with participation from prior investors like Index Ventures, CRV, Thrive Capital, Initialized and DFJ Growth. This totals $165 million in funding that Patreon has raised since its founding in 2013.

In February, I published a five-part series analyzing Patreon’s founding story, product evolution, business, competition and overarching vision. The company has prioritized established creators who can generate $1,000+ per month in membership revenue as its core customer and is focused on being the underlying platform they use to manage relationships with superfans through a CRM, payment processing and gating of exclusive access to content and discussion groups.

It makes money by taking a cut of each creator’s monthly revenue earned from their fans’ Patreon memberships.

Co-founder and CEO Jack Conte shared news of the Series D via a blog post, and tells me the new funds will contribute toward these priorities:

When I asked Conte whether he plans to use this new funding to make more acquisitions — Patreon acquired the white-label membership management platform Memberful last summer — he responded that there are no deals currently in the pipeline, but M&A is certainly on the table if they identify the right opportunity:

It’s been a few years that we have been seeing the ‘Patreon for X’ trend of startups focused on a specific niche like podcasting. We’re looking at those companies and always open to joining forces if the mission is aligned and product is great.

As it announced in January, Patreon expects to surpass $500 million in payments processed during 2019, passing the milestone of more than $1 billion paid out to creators since founding. Roughly 40% of those payments are international and the overall monthly spend of fans who use Patreon is $12 on average. 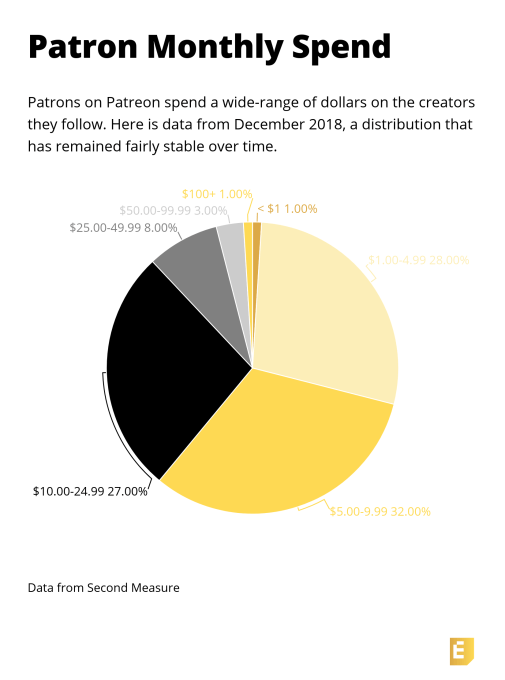 Glade Brook Capital’s managing partner, Paul Hudson, who originally founded the firm as a hedge fund, shared a statement with TechCrunch on why he invested in Patreon:

Too many talented creators struggle to monetize their efforts in the digital era. Patreon is growing so fast because creators recognize the value in building recurring fan-based revenue streams and improving engagement with their most passionate fans.

Conte also revealed that a handful of artists, including musician Serj Tankian and comedian Hannibal Buress, invested in Patreon as part of this new round. He hopes that the Pro and Premium tiers will draw more creators who don’t already use Patreon and support existing customers who need a more advanced toolset given the size of their fan base.

Correction: An earlier version of this article stated Patreon has a new office in Dublin. It has created a legal entity registered in Dublin but has not opened an office there.