You can get access to Uber’s controversial Quiet Ride button that lets you ask your driver for silence if you’ll pay a 20% to 40% premium atop the UberX price. Today the Uber Comfort tier launches in 43 cities and smaller states in the U.S. plus Ottawa, offering those willing to pay the premium access to newer mid-size cars with more legroom, higher-rated drivers and Rider Preferences for requesting specific climate control or no talking.

Before users hail an Uber Comfort car, they can request “quiet preferred,” “happy to chat” or leave the default of “no preference,” as well as warmer or colder temperature settings. These Rider Preferences launched in May as part of Uber’s pricier Black and SUV cars alongside a way to request help with luggage, but now they’re becoming more affordable.

The move allows Uber to charge more for slightly better vehicles and higher-rated drivers that used to be lumped in with its budget UberX tier. This also lets Uber compensate drivers better if they’re willing to forgo the small talk or crank the air conditioning. “Uber Comfort should result in fares for drivers that are at least 20% higher than UberX (not including surge or promotions) for a trip with the same time and distance,” an Uber spokesperson tells me.

Some critics consider the Quiet Ride button an affront to the dignity of Uber’s contractors, saying it makes them act like robots when their jobs will soon be threatened by self-driving vehicles. But others just see it as enhanced customer service that’s reasonable to request, given riders are paying for a driver’s professional services.

“The reception to Quiet Mode has been generally positive among drivers and riders,” an Uber spokesperson tells me. “Riders appreciate the consistency and control they have over the type of their travel; business travelers in particular have shared how rider preferences have helped them be more productive en route to the airport, important meetings, or other work-related destinations. Drivers have shared how these new rider preferences have helped take the guesswork out of riders’ expectations, and helped them provide the best service possible.” They also noted that Quiet Mode is described in app as a “conversation preference” rather than a firm mandate to be silent. 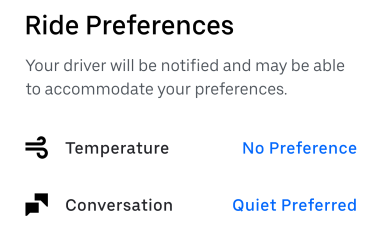 To qualify for Uber Comfort, drivers need a car that meets higher and consistent vehicle make, model, year and legroom requirements, like the Toyota Camry, Honda Odyssey or Chevy Tahoe. They also must maintain a 4.85 or higher rating to be eligible. If these drivers don’t want to receive Rider Preferences requests, they can opt out of being classified as Uber Comfort.

Here’s the breakdown of Uber’s tiers from cheapest to most expensive: 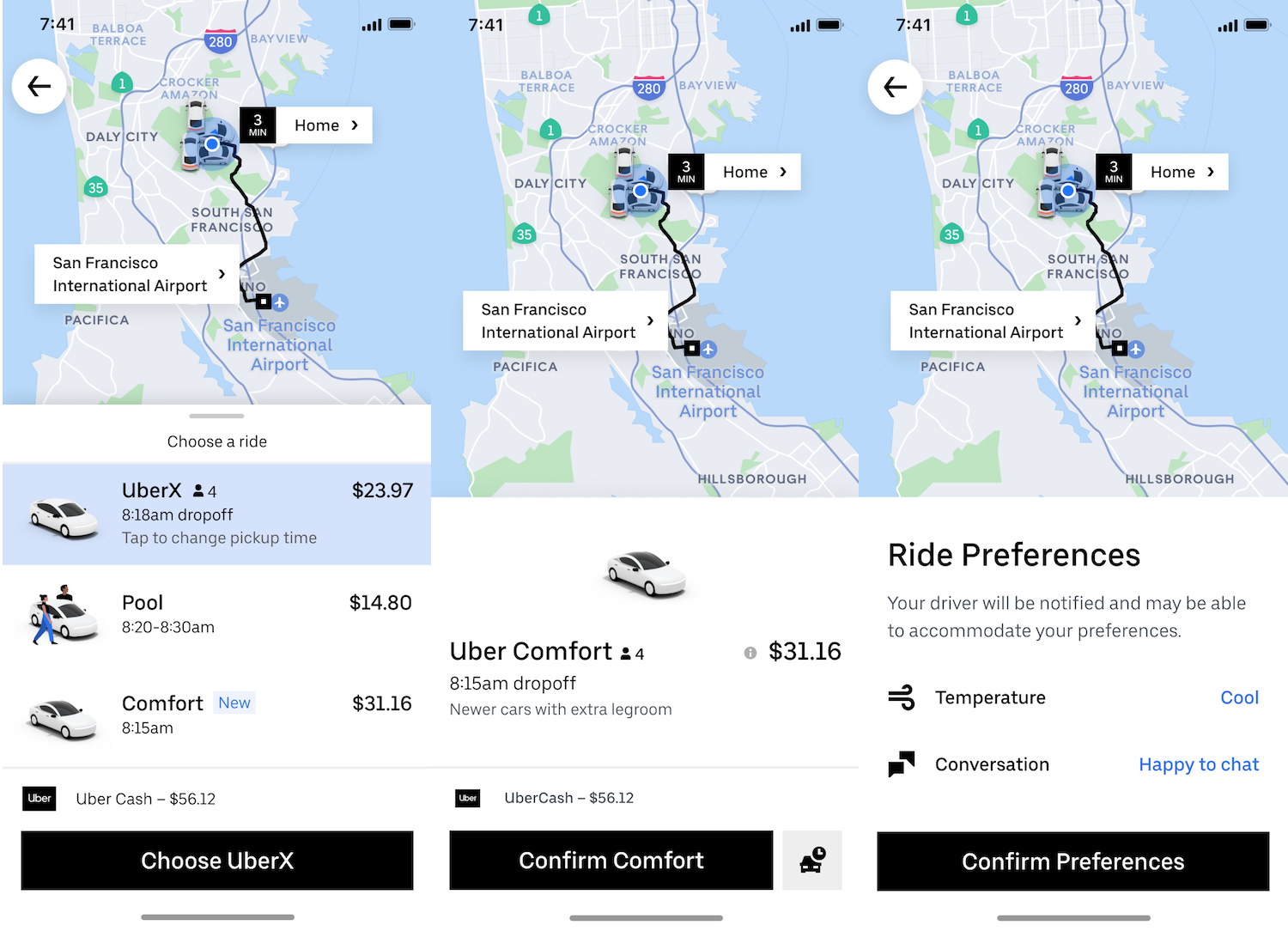 Back in December, I recommended Uber add a Quiet Ride option that can be nice if you’re trying to work or rest during your trip. Users told me it was awkward having to ask drivers mid-ride for quiet, as some would become offended or even hostile.

That’s especially problematic for women, some who said their male drivers’ probing questions would escalate to unwanted flirtation. Uber needs to do better at training drivers that this is unacceptable and weed them out of the system. But the reactive approach of waiting for negative ratings to come in after drivers have annoyed passengers can be augmented by allowing riders to ask for quiet ahead of time.

Bringing Rider Preferences to a wider swath of its vehicles could help Uber differentiate itself from competitors like Lyft and squeeze more cash out of passengers by training them to use its upgraded tiers as it tries to maintain momentum in the public market. Two months after its IPO, it’s finally recovered and exceeded its opening price.