CEO Merrill Brown says he founded The News Project to address one of the big problems in the journalism business: “It costs too much to launch and operate news sites.”

It’s an issue that Brown knows well — he’s a former journalist, journalism executive and educator who served as the founding editor in chief of MSNBC.com. He announced earlier this year that The News Project has raised a six-figure investment from WordPress VIP, and now it’s actually launching with its first customer, the nonprofit site CALmatters, which offers news and analysis around California politics.

Last week, Brown and The News Project’s product lead Miguel Ferrer walked me through what the company does, both for CALmatters and more generally. The company’s pitch, in a nutshell, is to provide a “news business in a box.”

Ferrer explained, “Not only is it what you need for a news business in a box, it’s also understood to be more than a technical toolset, more than a CMS, even as the CMS is ultimately the core of everything.”

Put another way: The News Project has stitched together a publishing platform by working with a number of different partners, offering content management and hosting from WordPress VIP, website development by 10up, reader engagement tools from Piano, design by Charming Robot and ads by Google Ad Manager. (TechCrunch works with a number of these companies, including WordPress VIP, 10up and Piano.) 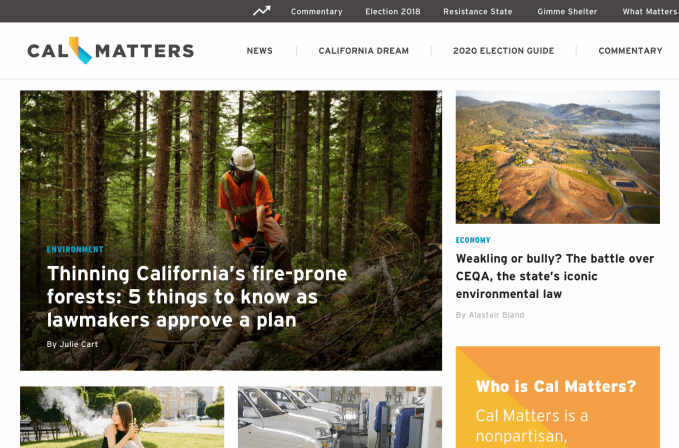 News organizations can get access to all of that by paying $25,000 to get on the platform, followed by a monthly subscription fee.

It’s not exactly a small investment, but Brown said that normally, “Unless all you’re going to do is hire a couple of kids, $25,000 is not going to get you competing in the complicated news ecosystem we’re working in today.” So instead of seeing a newsroom spend $250,000 or more on a website launch or redesign, “We want to see that money spent against words on the screen.”

When the new CALmatters website goes live, the obvious change will be a fresh look, but Ferrer said that’s just scratching the surface. For one thing, The News Project has built templates to support more sophisticated article formats, like feature stories that are driven by images and videos.

“We never forget that UX and designs have to be performance-oriented,” Ferrer added. By that, he means that when The News Project works with partners to create a website, a great deal of “care and attention” are given to “how are we giving [content] space in a design to breathe, how are we assuring that there’s opportunities for recirculation, and we’re equally attentive to opportunities around messaging or advertising that’s ultimately so important to the business side of the equation.”

Brown noted that these tools support a variety of business models and forms of reader engagement, but they’re built around “the belief that reader revenue is the future.” 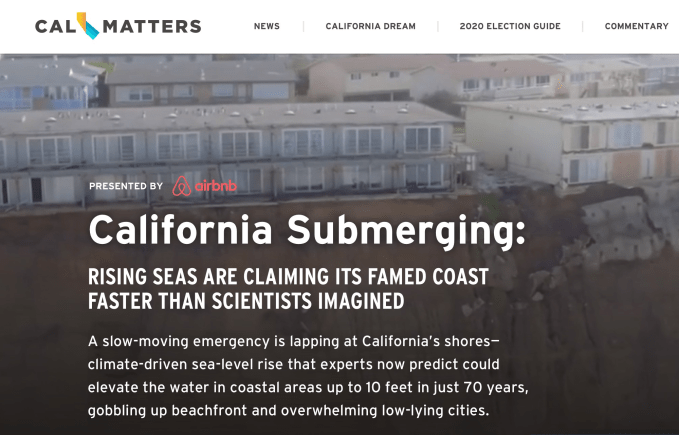 When asked about the broader issues facing the journalism business, Brown acknowledged that the industry is “going through a very significant restructuring” — but he suggested that this doesn’t mean newsrooms are going away.

“It isn’t about large daily metropolitan newspapers, it’s about sites in important vertical categories getting developed at the right scale, with the right kind of overhead — smaller and regional sites solving the problem of local news,” he said. “Certainly, the future of local news is not about newsrooms with 200 people in it, it’s about newsrooms with 20 people in it.”

And naturally, those are the kinds of newsrooms that The News Project has been built to serve.

Facebook says it will invest $300M in local news