Building apps and tools on the web shouldn’t just be for the technically inclined. In the early days of the web, it was easy to make your Myspace account, for example, unique to your personal aesthetic. Glitch is doing that for the modern era.

Glitch, formerly known as Fog Creek Software, is an online community where people can upload projects and enable others to remix them. Glitch CEO Anil Dash likens coding on Glitch to working together inside Google Docs.

“The biggest thing I see is the creative impulse for recreating the web never went away,” Dash told TechCrunch. “There was a latent desire, so we didn’t need to do much.”

Glitch started inside Fog Creek Software as Gomix, which similarly aimed to democratize app building. In March 2017, Gomix became Glitch and has since ballooned into a community that has created more than 2.6 million remixed apps. These apps range from tools to tidying up your Twitter timeline to randomizing who is forced to take notes or do other tasks during the meeting to creating animations using CSS, and much more. 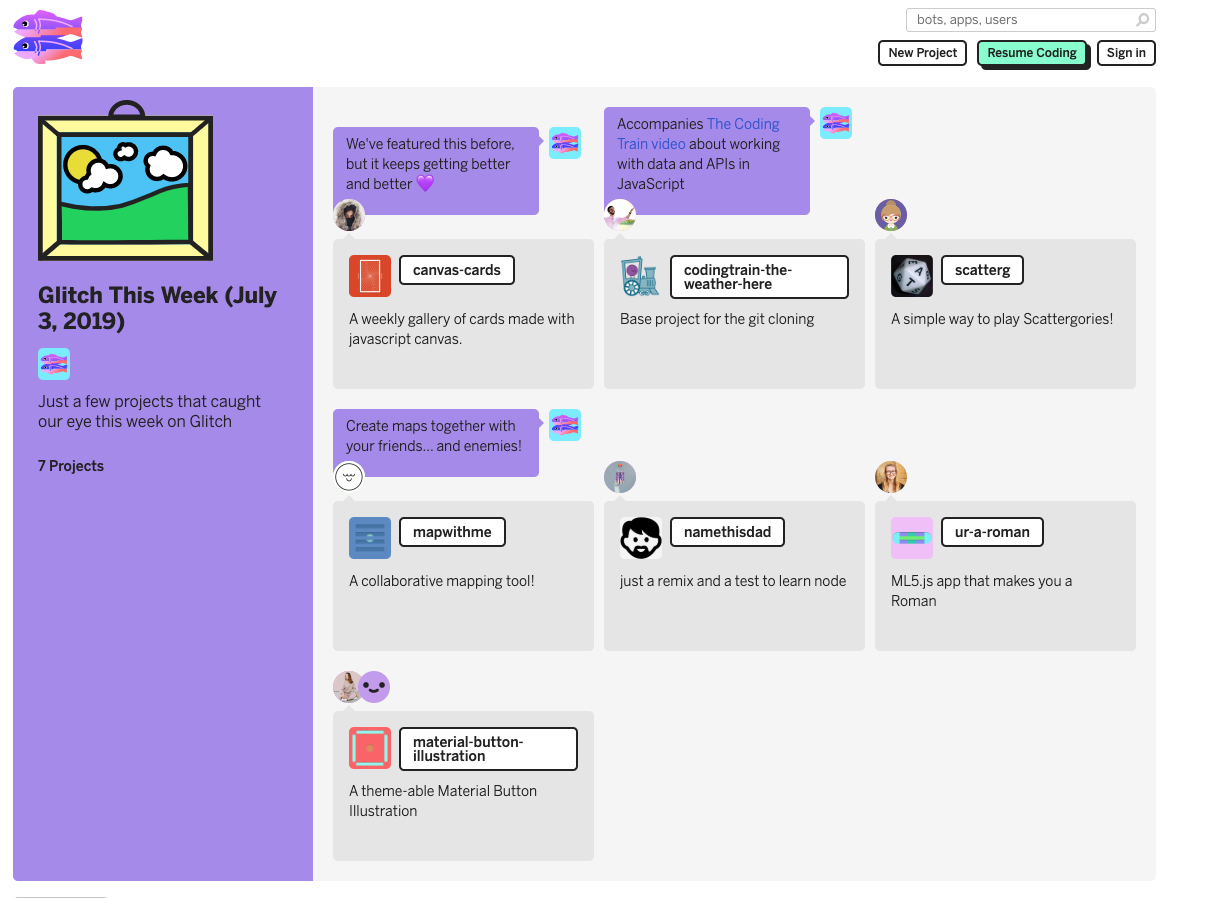 This 2.6 million-plus remixed apps milestone is notable, Dash said, because Glitch crossed 1 million apps just one year ago. It shows that “people are building stuff all day, every day.”

Hitting this milestone is partly why Glitch waited to announce its $30 million Series A round from Tiger Global, Dash said. The round — the first-ever institutional investment for the 19-year-old company — closed in November 2018, but Dash said he wanted to be able to show people that the company did what it said it would do: grow the team, which has doubled in size in the last year, and grow the community.

“We wanted to show people that you can judge us by what we did over the last year,” Dash said. “If anything, we have only gotten more outspoken and thoughtful about how we grow.”

As Glitch has grown the team, Dash says the company has been pushing hard to set the bar around diversity and inclusion, as well as tech ethics.

On the D&I side, 47% of the company identifies as cisgender women, 40% identify as cisgender men, 9% identify as non-binary/gender non-conforming/questioning and 4% did not disclose. On the race and ethnicity front, the company is 65% white, 7% Asian, 11% black, 4% Latinx, 11% two or more races and 2% did not disclose. Meanwhile, 29% of the company identifies as queer and 11% of people reported having a disability. These numbers are pretty good.

“[Diverse representation] is not impossible,” Dash said. “It’s not science fiction. It’s not this thing that exceeds your grasp, and you can do it while going through massive growth in the community and on the team.”

On the ethics side, Dash says the company thinks deeply about privacy and ensuring school kids, for example, never have to log in in order to use it. While Glitch is free to the masses, it does charge companies that are looking to reach developers, like Slack and Google. Google, however, has been under heavy scrutiny as of late for a variety of reasons pertaining to ethics. Dash, himself, has been an outspoken critic of Google.

“We talk about it a lot internally,” Dash said. “On one level, there’s the very pragmatic conversation of how do you be in it but not of it. The filter we’ve used is ‘are we enabling what our community seriously wants to create?’ ”

Glitch specifically works with the team at Google focused on the open web, open frameworks and web standards. But as Glitch moves toward products like Tensor Flow, an open-source artificial intelligence library, the company makes sure every example includes education around responsible use of technologies, Dash said. Ultimately, it’s hard to completely discount Google from the experience because of how core its technologies have become.

“You can’t be credibly showing people how to make tools for their work or learning to code and not show them some of Google’s technologies,” Dash said. “For better or worse, that’s the web we live on. I think everyone engages with that on a real authentic level…The hard part is how do you strike the balance of being as ethical as you want to be while still existing in the ecosystem we’re in. We’re going to be a for-profit capitalist company until the revolution comes. But within that framework, can we be something that proves all the things people say about recruiting, business models, diversity — that those constraints they imagine are not true.”