In the video above, you can see bystanders asked to pose for photos with a model of the Opticor, an elaborate gun from the game. They’re warned not to pull the trigger — but what they don’t know is that a nearby police car and mailbox have been rigged to explode. That’s exactly what happens on-camera, leading to everyone’s shock and embarrassment.

I spoke with Krivicka earlier this week to learn more about how the video was staged. He explained that the props, created by custom design and fabrication firm A2ZFX, were all synchronized with a remote control that could set off the gun, car and mailbox at the same time.

The exploding effects used compressed air, with a small team taking about 15 minutes to reset everything between each take — which also provided the time needed for bystanders to move on so that there’s always a fresh set of eyes who have “no idea what’s going to happen.” 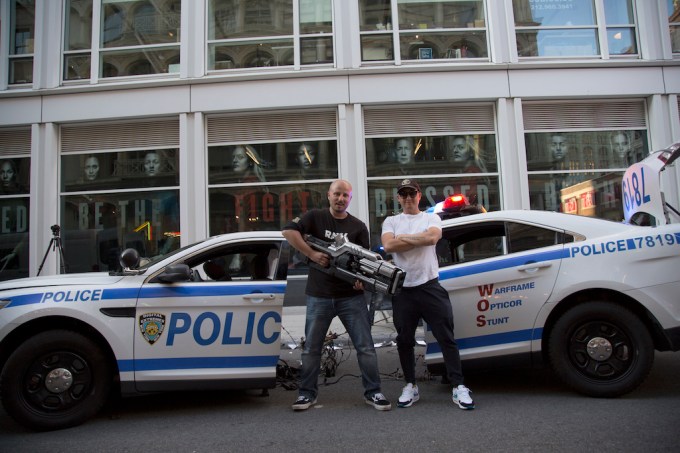 He also noted that this was a “very controlled environment,” with New York City police officers off-camera: “I suggest through editing that it was a lot more rogue than it really is.”

Although this is Krivicka’s first game-related video, he’s created a number of other viral marketing stunts in the past, including ones where the spooky girl from the “Ring” movies actually crawls out of a TV and a “Cobra Kai” video where casual karate moves can split motorcycles in half. The common goal, he said, is to “always bring the sci-fi to life in the real world.”

This is also the first major video produced by Krivicka’s new agency WhoIsTheBaldGuy, but he said his aims haven’t changed: “I want to really create things where people are going, ‘Oh my God, what the fuck!’ I just want to go bigger and bolder. That’s the stuff that performs really well online.”

What Not To Do In Your Startup Promo Video